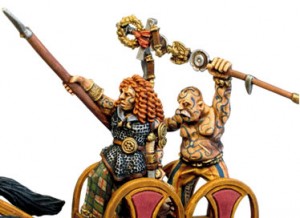 There has been a fair amount of interest shown in ‘The Dip’, as The Army Painter’s Quickshade system is more commonly known.

Reactions to ‘The Dip’ vary wildly – some love it, some don’t seem to care, and some are vehement in their disapproval (despite not having sampled it, we imagine….).  I’ll nail my colours to the mast here: I have become a big fan of ‘The Dip’ – providing it’s used carefully, and followed by a decent matt varnish.  It wasn’t always so – even a year ago, I was saying very rude things about ‘The Dip’ and those who used it.  But having been persuaded to try it, during a period when I was struggling to paint anything at all in a reasonable amount of time, I found that it answered my need at the time, and I have grown to love it.

The results it gives aren’t up there with the works of Tom Weiss, Dave Woodward, Steve Dean, Kevin Dallimore, etc.  But then, merely reasonably competent painter that I am, neither were my usual efforts via a more traditional method.  And I do believe that, with a modicum of care, the results are better than the vast majority of ‘wargames standard’ paint-jobs, as well as being a lot, lot faster.

I usually use Army Painter’s ‘Strong Tone’ Quick Shade – the vast majority of gamers using Quickshade choose Strong Tone to complete their armies.  At first blush it isn’t cheap, but a tin goes a very long way – you’ll get 3-4 good-sized armies completed with one tin on average. The three different versions they produce are all used in the same way, but the amount, and colour, of the shading varies.  Soft Tone gives a pale brown shadow; Strong Tone a deeper brown shadow; Dark Tone a black shadow.  The brown shadow given by Strong Tone doesn’t suit all base coats equally well – it looks best applied over browns, fawns, reds, yellows, and olive greens.  It’s at its least realistic over strong or very light blues.  Keeping those caveats in mind though, the effect it gives can be very pleasing – shadows are infinitely well-blended, and, particularly compared to the ‘standard’ 3-colour base-coat, mid-tone, highlight system, seem very ‘organic’.  It will not shade colours deeper than itself – for those, you need to employ different methods. 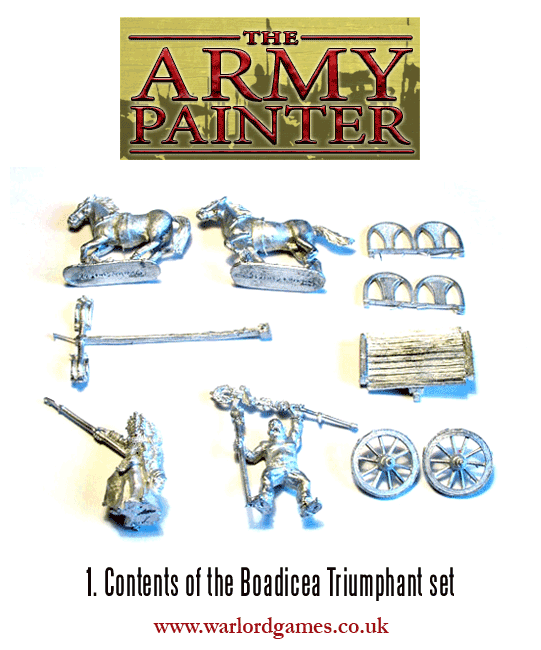 I’ll be using Warlord Games’ Boadicea Triumphant! set as our subject. Aside from being a  gorgeous model it also shows several finishes such as flesh, cloth, wood, metal and horses – ideal for this walkthrough.