Warlord staff member Darren Evans was keen to try out the new Bolt Action spray paints, so we asked him to do a quick step-by-step guide. Over to Daz…

Stage 1: With my models assembled, cleaned and based, I kept the can (after a bit of vigorous shaking mind you) the obligatory 20cms from the model (I did, giddy with power, creep up to 15cms for the sheer hell of it!). I used British Uniform Brown for my plucky British infantry and German Field Grey for my Wehrmacht models. I must say the coverage on just one pass was great – some sprays on the market put out a lot of colour but miss the more off-centre bits. 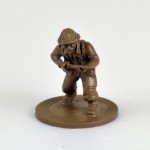 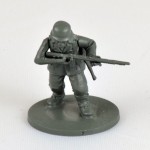 Stage 2: After the models were dry, I used a fairly large brush and some Warpaints dark tone ink to liberally coat the figures ( you can see that this makes the uniform folds look great and starts to create a highlighted effect). 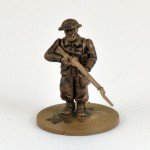 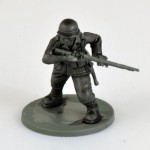 Stage 3: The next thing I did was to block in the other solid colours on things like ancillary pouches, webbing, putties boots, flesh, etc. I kept the palette fairly modest – my idea was to buy, build, paint and play!
For the rifle furniture (stock etc) I used Oak brown and Vellejo Gunmetal grey for the metal bits.
British webbing and putties were coated with Vellejo 821 German Camouflage Beige, while extra pouches were picked out in 882 Middlestone.
The Germans were a tad easier as they were mostly black – the exceptions being putties in 989 Sky Grey and pouches in 882 Middlestone.
For both forces the skin was painted with a base of 928 light flesh, and the boots in black. 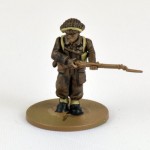 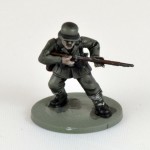 Stage 4: If you’re like me you might like to add an extra layer of detail such as on the German collars and shoulder boards. You can pick out the white infantry piping and create highlights by running a thin line of the base colours over raised sun-facing areas. The blacks can be brought out by a light drybrush of 989 Sky Grey mixed with a little black. Base them up with some sand an static grass and hey presto you are ready to give your opponent a damn good thrashing – should the dice be on your side! 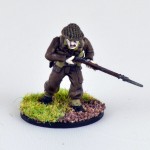 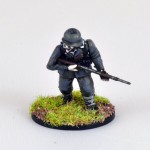