Ships of the line at Trafalgar 1805 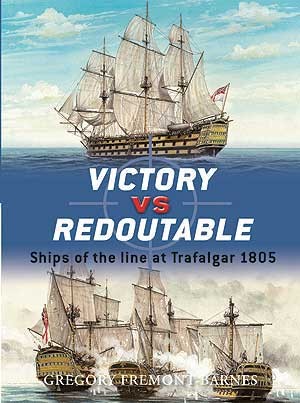 Late in the morning on 21 October 1805, warships from the British and combined French and Spanish fleets clashed off Cape Trafalgar on the Spanish coast. After a six month game of cat and mouse across the Atlantic, 27 British ships of the line engaged the Allied force of 33 ships of the line. This was a duel of skill, tenacity and bravery as captains and crews battled for mastery of the seas. This book is an opportunity to relive the action at Trafalgar – read the accounts of sailors who were there, and who experienced the sound of scraping cutlasses and bombarding cannons at one of the most important naval engagements of history. Understand how the guns were operated, learn about the training of crews and study the design and development of the incredible ships which dominated naval warfare of the period, as Gregory Fremont-Barnes reveals the revolutionary tactics used by Nelson to secure a victory that saved Britain from the threat of invasion and ensured British naval dominance for over a century.

Gregory Fremont-Barnes holds a doctorate in Modern History from the University of Oxford and serves as a Senior Lecturer in the Department of War Studies at the Royal Military Academy, Sandhurst. A prolific author, his books include Waterloo 1815: The British Army’s Day of Destiny and many others on military and naval subjects covering the 18th to the 21st centuries. Holding a particular interest in insurgency and counterinsurgency, his wider work for the UK Ministry of Defence on these subjects regularly takes him to Africa, the Middle East and South America. As an academic advisor, Dr Fremont-Barnes has accompanied many groups of British Army officers and senior NCOs in their visits to numerous battlefields of the Peninsular War, the Waterloo campaign, Normandy and the Falklands.

Ian Palmer is a highly experienced digital artist. A graduate in 3D design, he currently works as a senior artist for a leading UK games developer. Besides his artistic interests he is also a keen musician and motorcyclist.

Howard Gerrard studied at the Wallasey School of Art and has been a freelance designer and illustrator for over 20 years. He has worked for a number of publishers and is an associate member of the Guild of Aviation Artists. He has won both the Society of British Aerospace Companies Award and the Wilkinson Sword Trophy.