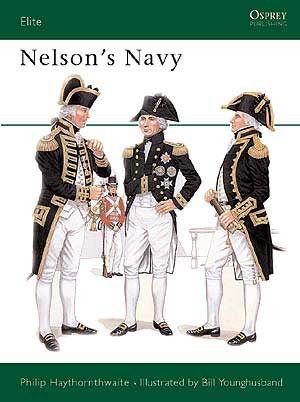 Despite the many celebrated victories of the British Army during the Napoleonic Wars, the role of the Royal Navy should never be overlooked. The ‘wooden walls’ formed the country’s first and most important line of defence, and ranged throughout the world to protect Britain’s trade-routes and in support of the land forces and overseas possessions. This book covers the huge variations in uniforms not just in the Navy but the Royal Marines and Infantry regiments which served alongside naval crews. It also looks at the organisation, training and recruitment of the force and corrects a number of misconceptions regarding impressment and training.

Philip J. Haythornthwaite is an author and historical consultant specialising in the military history, uniforms and equipment of the 18th and 19th centuries. His main area of research covers the Napoleonic Wars. He has written some forty books, including more than 20 Osprey titles, and innumerable articles and papers on military history, but still finds time to indulge in his other great passion: cricket.

Bill Younghusband was born in 1936. He was educated in Devon and studied at Newton Abbot College of Art. He has been interested in all things military since childhood, and this interest was compounded through the reading of authors such as G.A. Henty. In 1954 he joined the Life Guards and saw service in Egypt and Cyprus. Bill is a respected military illustrator of more than 15 years experience, and has illustrated many Osprey books including Men-at-Arms 299 Austrian Auxiliary Troops 1792-1816 and Campaigns 48 Salamanca 1812 and 59 Vittoria 1813. He is married with one daughter and currently lives in Ireland.