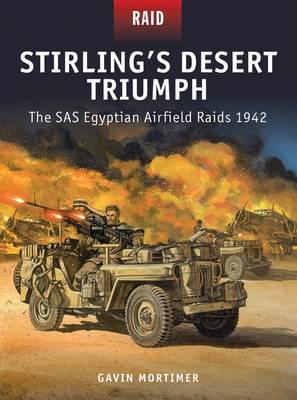 The night of July 26, 1942 saw one of the most audacious raids of World War II, just as the outcome of that conflict hung in the balance. In North Africa, a convoy of 18 Allied jeeps carrying Special Air Service personnel appeared out of the early-morning darkness and drove onto the Axis landing strip at Sidi Haneish in the Egyptian desert. Within the space of a few savage minutes, 18 Axis aircraft were ablaze; a dozen more were damaged and scores of guards lay dead or wounded. The men responsible for the raid then vanished into the night as swiftly as they had arrived, prompting the Germans to dub the enemy leader, David Stirling, ‘The Phantom Major’.

Featuring full-colour artwork, gripping narrative and incisive analysis, this engaging study recounts the origins, planning, execution and aftermath of the daring raid that made the name of the SAS at the height of World War II.

Gavin Mortimer is the author of Stirling’s Men (Weidenfeld & Nicolson, 2004), a ground-breaking history of the early operations of Britain’s Special Air Service, The Longest Night: Voices from the London Blitz (Weidenfeld & Nicolson, 2005) and The Blitz: An Illustrated History (Osprey, 2010).Gavin is an award-winning writer whose books have been published on both sides of the Atlantic, He has previously written for the Daily Telegraph, the Sunday Telegraph, the Observer and Esquire magazine. He continues to contribute to a wide range of newspapers and magazines from BBC History to American Military History Quarterly. In addition, he has lectured on the SAS in World War II at the UK’s National Army Museum.

Peter Dennis was born in 1950. Inspired by contemporary magazines such as Look and Learn he studied illustration at Liverpool Art College. Peter has since contributed to hundreds of books, predominantly on historical subjects, including many Osprey titles.