Frigates during the War of 1812 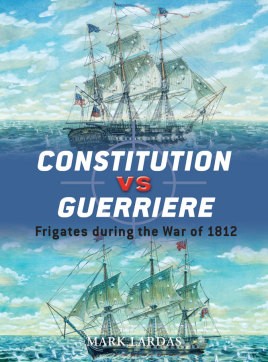 Famed as a classic naval duel, a one-on-one clash between two sailing frigates offered the victor immeasurable fame and glory. During the War of 1812, the Royal Navy and United States Navy squared off in four such duels, the most famous that between the USS Constitution and HMS Guerrière. Ships and tactics between the two nations varied enormously, with the American navy favouring a revolutionary design of frigate, with twenty-four pounder guns and heavy structural timbers, while the British, used to fighting the French and Spanish navies, relied on smaller, eighteen-pounder frigates. Through first-hand accounts of these four single-ship actions and fascinating comparisons of artillery, crew ability and tactical achievements, this book offers an unparalleled insight into the ruthless reality of frigate battles in the War of 1812.

Mark Lardas holds a degree in Naval Architecture and Marine Engineering, but spent his early career at the Johnson Space Center doing Space Shuttle structural analysis, and space navigation. An amateur historian and a long-time ship modeller, Mark Lardas is currently working in League City, Texas. He has written extensively about modelling as well as naval, maritime, and military history.

Peter Bull graduated from art college in 1979 and has worked as a freelance illustrator for over 25 years. He has created both traditional and digital art for publishers worldwide, and also runs the Peter Bull Art Studio, based in Kent, UK, which he founded in 1975. Peter completed the digital artwork and the maps for this volume.

Giuseppe Rava was born in Faenza in 1963, and took an interest in all things military from an early age. Entirely self-taught, Giuseppe has established himself as a leading military history artist, and is inspired by the works of the great military artists, such as Detaille, Meissonier, Rochling, Lady Butler, Ottenfeld and Angus McBride. He lives and works in Italy. Giuseppe completed the battlescenes and the cover artwork for this volume.