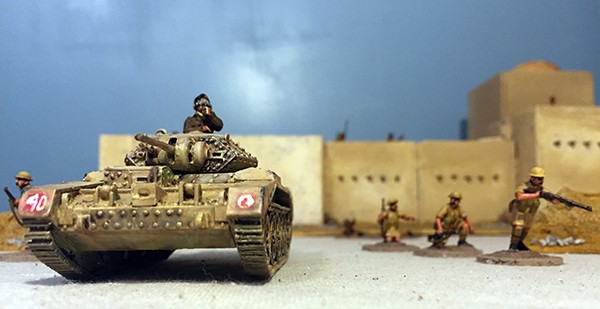 So after a painting drought of three months due to life getting in the way (as if that ever happens…), I have finally recently got back to the workbench and painted some more of my Operation Sand Dune force. If you have seen any of our articles or YouTube videos you will know that myself, Andy Singleton and Sam Phillips have embarked on a project to build some armies for Warlord’s latest Bolt Action Supplemental, Duels in the Sun. I am building roughly a 650 point British 8 th Army force set roughly in 1940 around the Operation Compass list and eventually I will move on to build a 650 point force of Indian Army, roughly set in 1941/42 based around the Operation Lightfoot list. 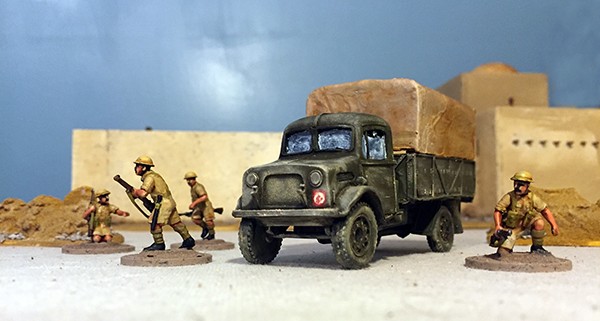 As a way of getting back into painting I decided to tackle my Crusader tank which will eventually support my Indian force, my 3-ton Bedford truck and my B.E.F. 18/25 pounder artillery piece with crew. 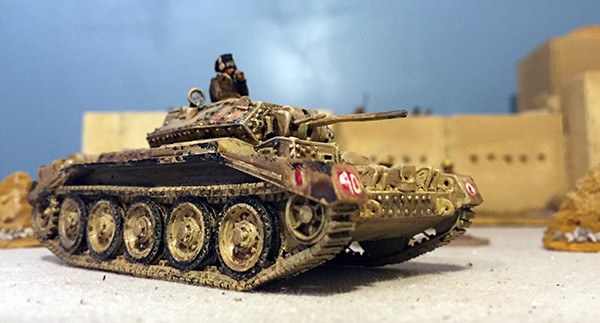 I planned to paint the Crusader in a desert scheme, as the context is that it has been in the desert some time fighting with the Indian army. For this I used started off priming the tank with a matte black spray and then used Dark Yellow (Vallejo 978) as a first coat. I quickly found that I had not shaken the paint well enough and it had gone on as a sort of green colour. It almost looked like the camouflage paint had worn away in places. I then decided to do a second coat of Iraqui Sand (Vallejo 819). This gave it a much more sandy look which was what I was aiming for. A quick dry brush with some white to pick out the raised areas and the tank was starting to gain some character. I then used a Sepia GW wash and once dry used a Nuln Oil GW wash to make areas where oil had dripped and pooled. I painted the tank commander with a battledress tunic (Vallejo 921 English Uniform) and gave him a black beret for the Royal Tank Regiment. I also decided to add some unit markings but due to be a cheap skate and being scared to try decals I painted them on by hand and heavily weathered them to make them look worn. Finally, I used some Tamiya weathering powders to make the vehicle look like it had seen a lot of action. 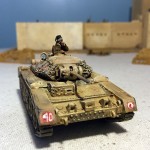 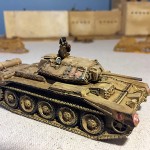 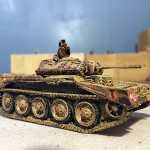 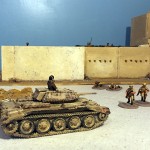 My plan for the 3-ton Bedford and the 18/25 Pounder was to add them to my Desert Rats infantry. The context was that they had very recently been shipped over to North Africa as reinforcements. Due to this I decided to paint them in a European paint scheme and then add weathering to them, the idea being that they had not been there long enough to be painted in a desert scheme but had been in constant use since arriving. 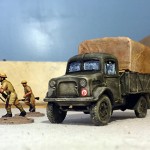 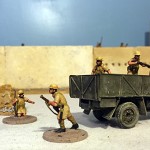 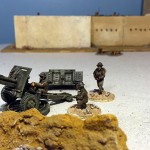 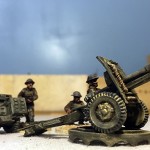 Both the Bedford and 18/25 Pounder were primed with the same matte black spray and then were given a couple of coats of Brown Violet (Vallejo 887). The canvas of the Bedford was painted with Khaki (Vallejo 988). The windows were painted white and then when dried gone over with blue GW wash (Drakenhof Nightshade). The artillery crew was painted as per regular B.E.F. infantry and then I used weathering powders to give the impression of the dust and sand that would have blown against them. For the bases I used the Vallejo sand texture paint, added little rocks, dry brushed and added a Sepia ink wash. I also used the weathering powders on the Bedford and 18/25 Pounder concentrating primarily on those areas that would get the most weathered. 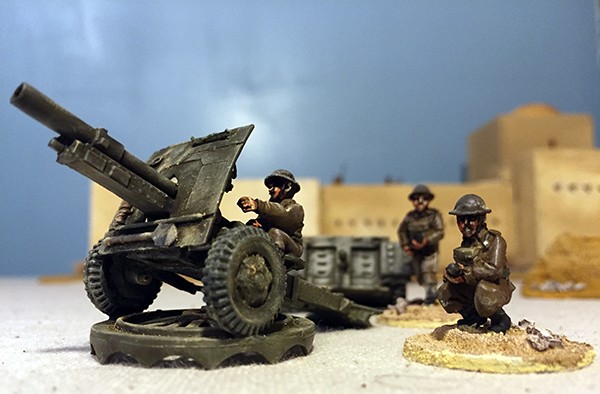 To see more of my force check out my YouTube channel where I have videos on the force, terrain for the desert, live chats and many other project videos and reviews. Check out my channel at the link below or search YouTube for T’s Creative Ramblings. 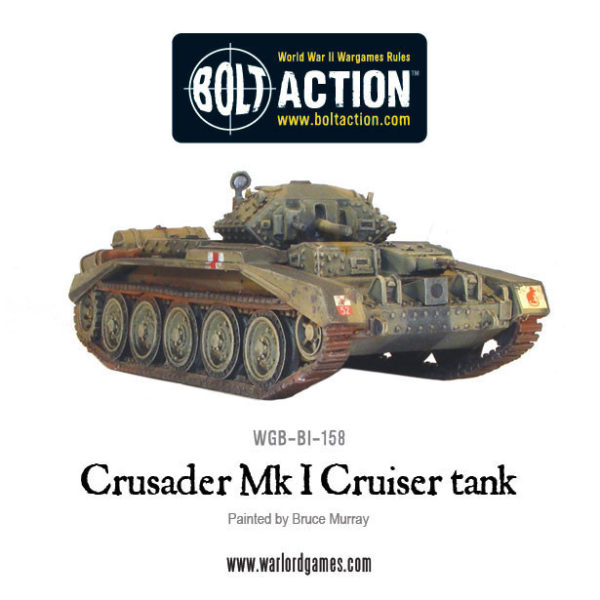 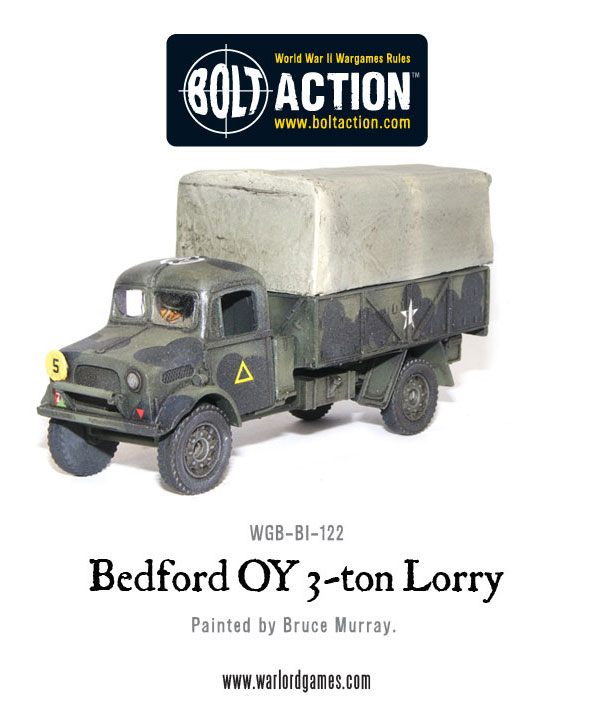 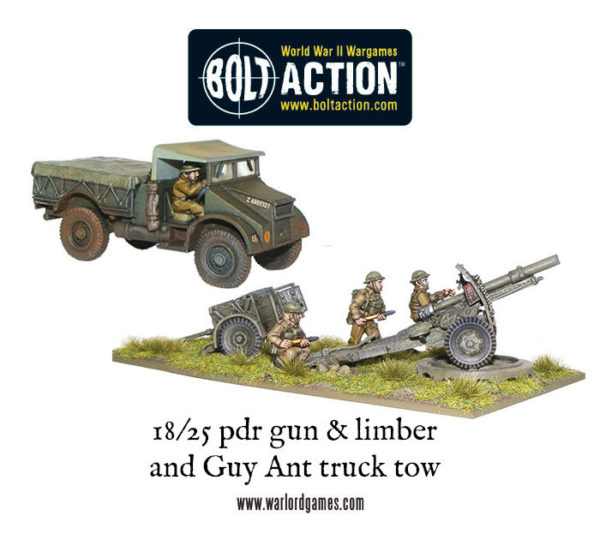 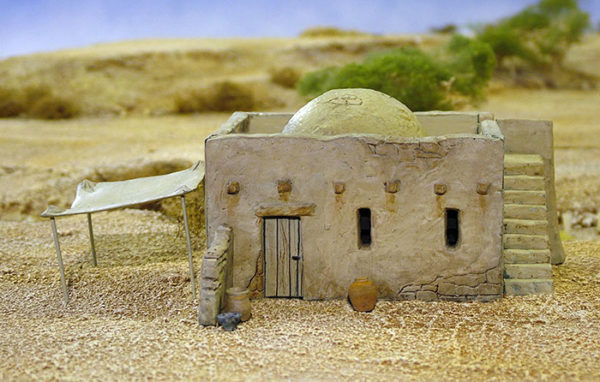