Edward Nelson reports back his findings at HUZZAH 2017 and shows off the stunning Stalingrad board that was featured there! 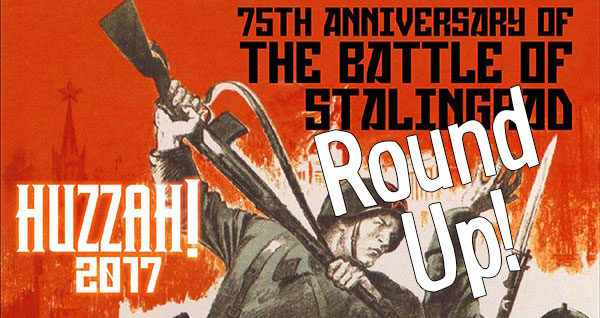 This year marks the 75th year since the start of the battle for Stalingrad. At Huzzah, held in Portland Maine (USA), Tony Reiger and a group of friends created 3 jaw dropping Stalingrad-themed tables to commemorate the battle. (Huzzah is a game convention held in Portland, Maine every year, which focuses on historical gaming.) 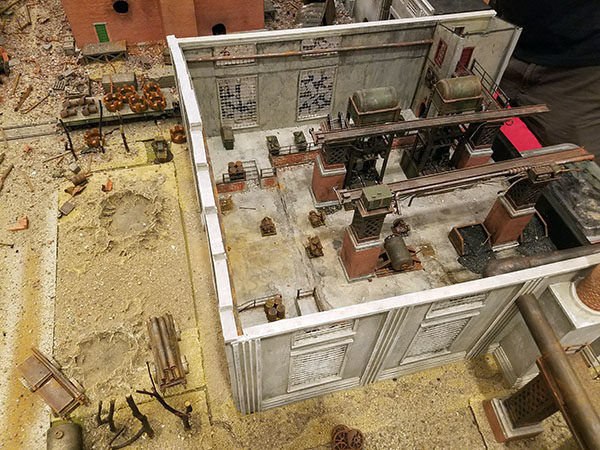 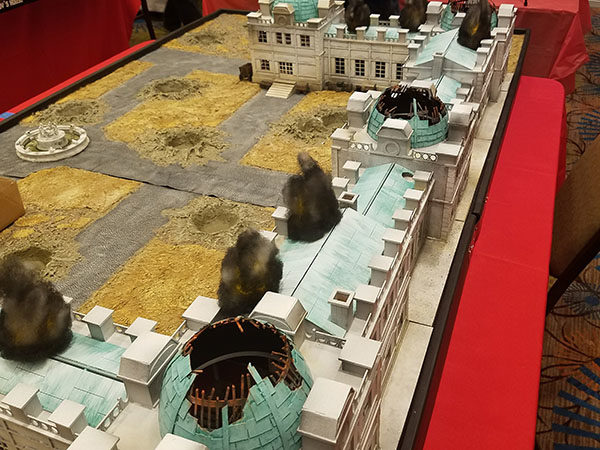 When I first saw the Stalingrad tables, Tony was still setting them up for the games of Bolt Action that were going to start at 9 am. As you can see in the photos, his tables bring terrain up to a whole new level of quality – they look more like dioramas or photographs. As it turns out, that’s because Tony did the best he could to recreate photographs of the battle of Stalingrad. As you can see, his efforts paid off. 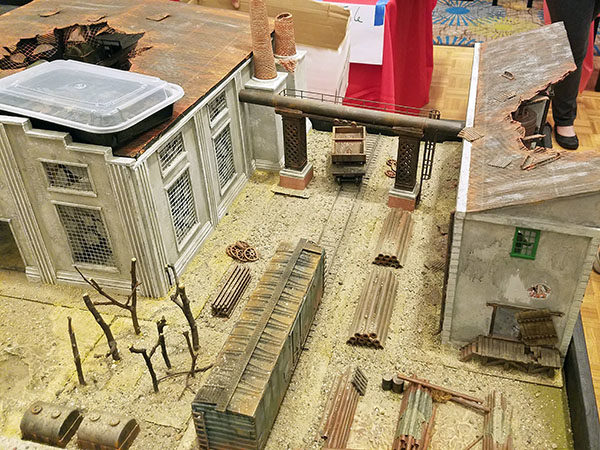 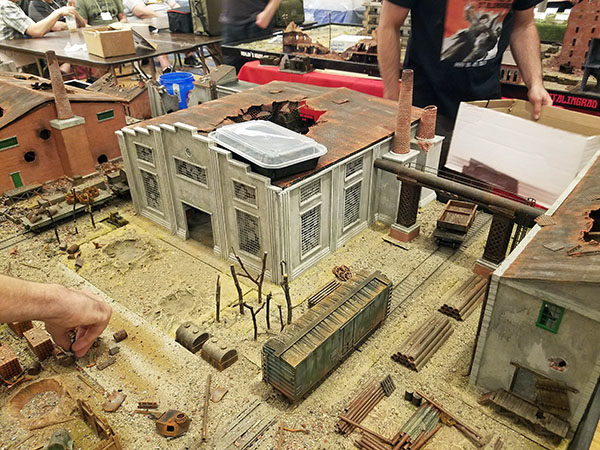 One table was centred around Pavlov’s House and apartment building that the Russian soldiers were able to hold despite repeated German attacks. The apartment building is a laser cut structure that Tony designed in collaboration with Joerg Bender, owner of Things From the Basement. The building consists of 3 stacks of floors, each of which can be removed so you can position troops on each floor! Each floor was made of rooms big enough to hold 15 infantry bases, and the balconies are big enough to fit 4 infantrymen. 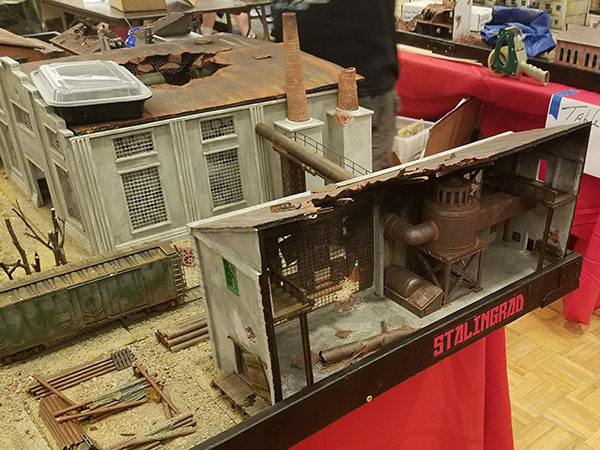 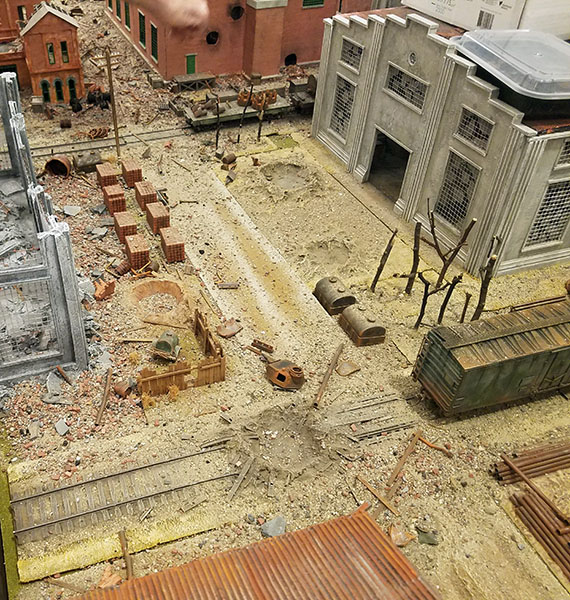 The second table was taken up by the gigantic railway station of Stalingrad. The train station building was another collaboration between Tony and Joerg. (Look for it on the Things from the Basement website.) Tony went so far as to add posters to the walls of the station! All the roofs come off, so the Germans and Russians can fight it out, room by room. 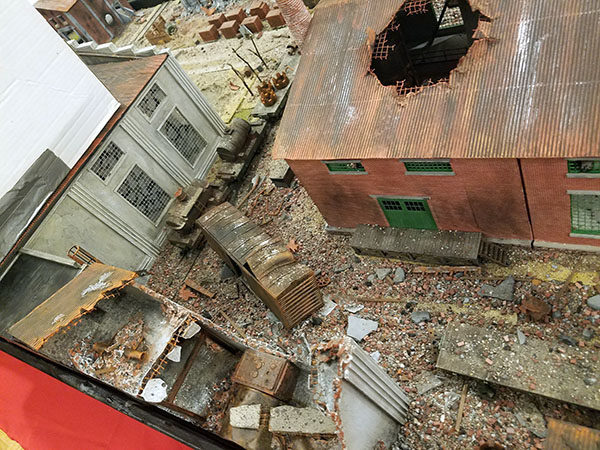 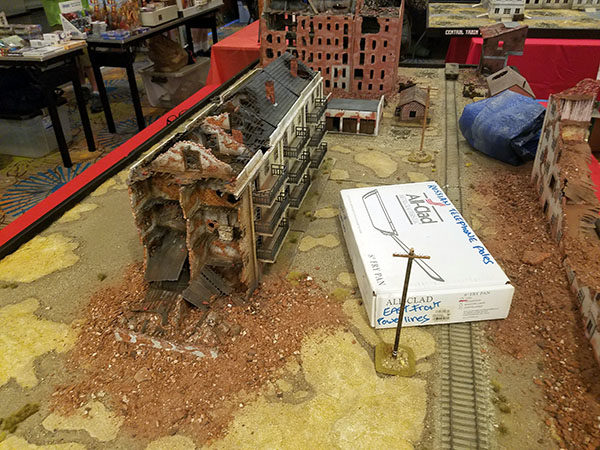 The third table was the Red October Tank Factory. This table really captured my attention. The railway cars are O scale, bought from a train store that sells second-hand railroad collections. The roofs on all the factory buildings are removable to make it easy to carry on the fight inside the buildings. The interiors look awesome. I have no doubt that Tony based the interiors on photographs as well. I really loved the look of the ruined factory – the battle damage to some of the railway cars and then the detail inside the factory buildings. Awesome! 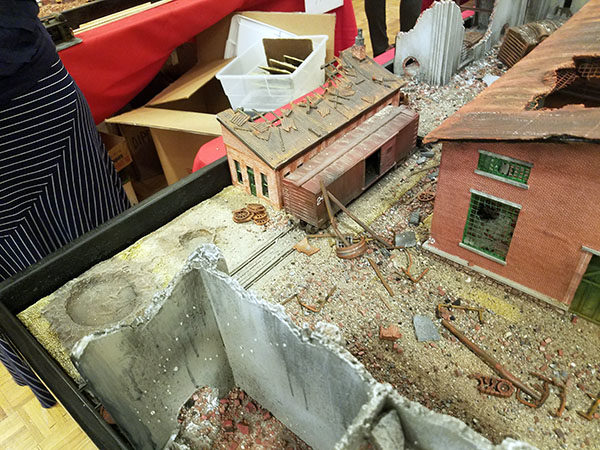 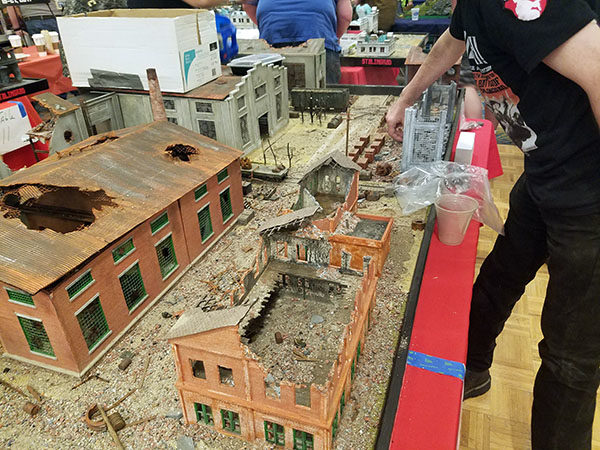 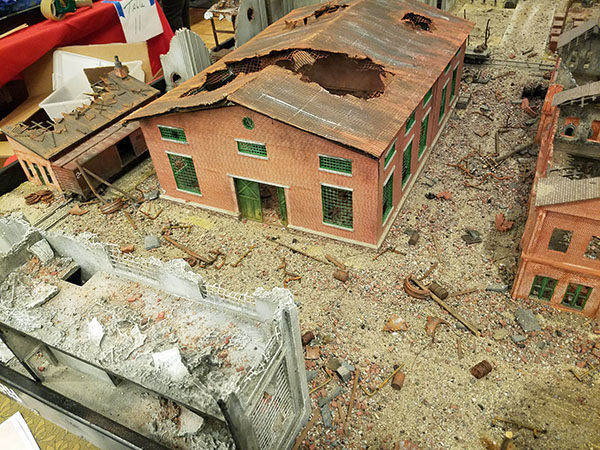 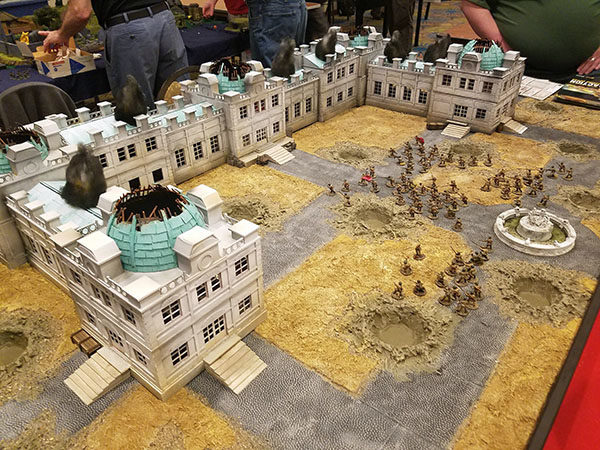 A game this big can easily get bogged down by players negotiating over who gets to use the order die drawn from the bag. Tony had a neat solution for that – order chits specific to each player. There were four German players, and so there was one set of chits for German player one, another for German Player two, etc. The same was done for the Russian players. This sped things up tremendously because then each player went when his chit was drawn. With the 40 or so order chits in the bag, we were able to get in one turn in an hour. Everyone was engaged – while one person was moving, I drew the order token for the next player so the next player could consider his move while waiting for the moving player to finish. 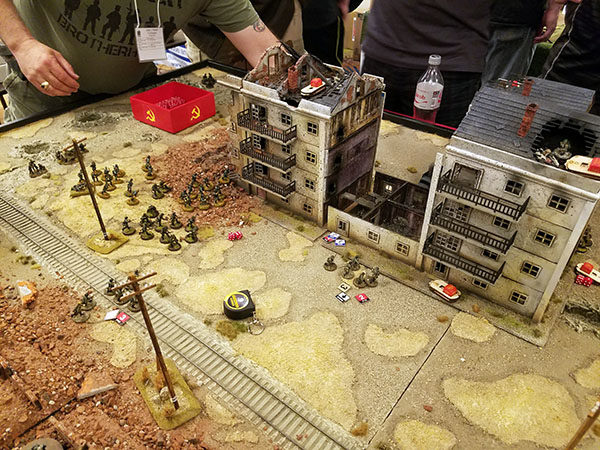 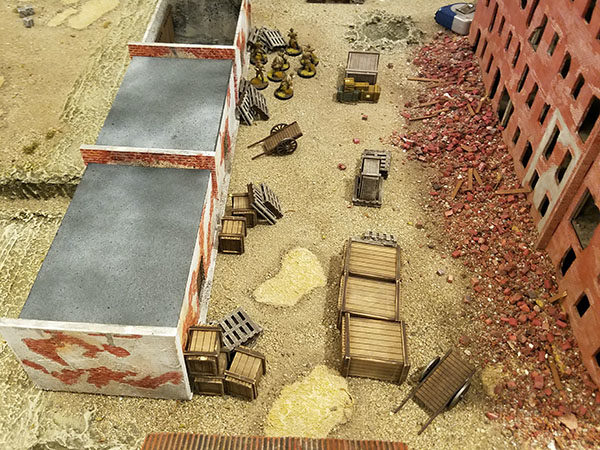 Three games were played on the Pavlov’s House table on Saturday. In the first game, the German players made several attempts to assault one part of Pavlov’s House or the other. In one particularly bad turn of luck, German flamethrowers were unable to score any casualties against a Russian squad in the building. The following assault did not go well. The players were able to finish 4 turns, with the Germans getting to the house, but not able to get in. 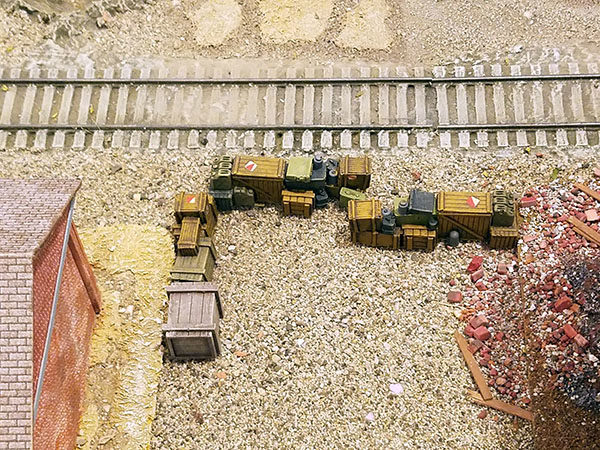 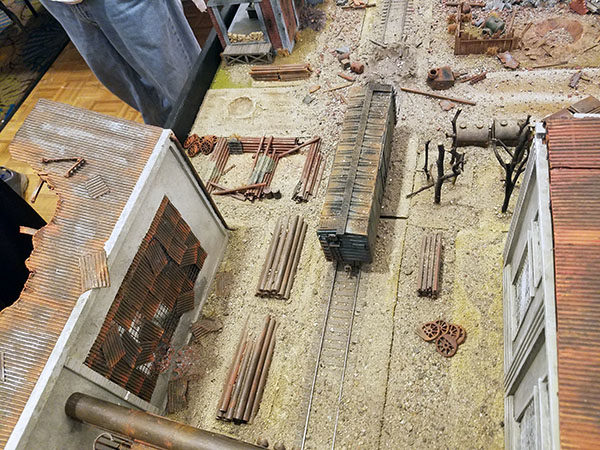 In the second game, there were 3 German players against 2 Russian players. Fate was with the Germans this game, and by turn 4 there were no more Russian troops in the house aside from a Russian commissar. To make things more fun, as the gamemaster, I gave the Russian player a fresh unit of fanatics coming up from the tunnel in the basement. That one squad destroyed two German squads and mauled a third. The Russian players enjoyed smashing up a few German units before the game ended. 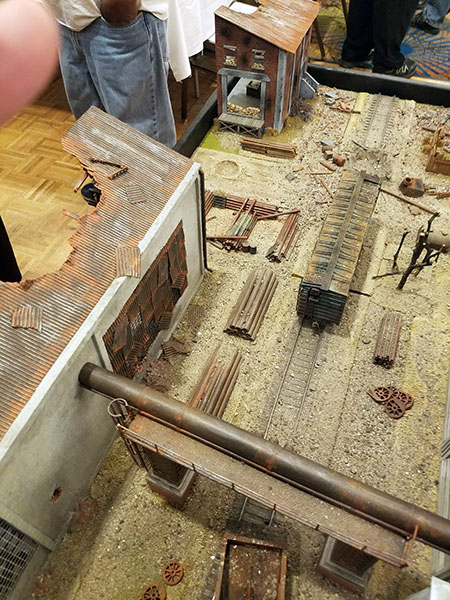 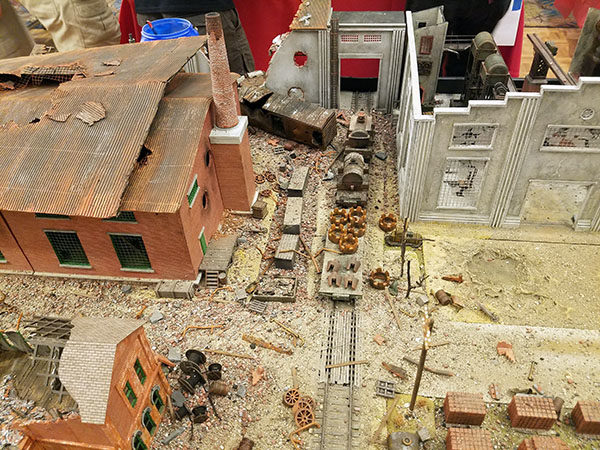 In the third game, there were 3 Germans against 2 Russian players. This time, the dice adored the Russians who stopped the Germans cold. The Russians were so determined that they even assaulted a German tank, immobilising it in one turn and then destroying it the next turn. With the Russians swarming up the board to relieve Pavlov’s House, and the German’s numbers thinned out, the German conceded the game at the end. The German players did get 3 squads into the house, but then lost two of those squads to assaults inside the building. It was a bloody battle, with the Russians prevailing because they simply had more squads and therefore could get order dice more often. 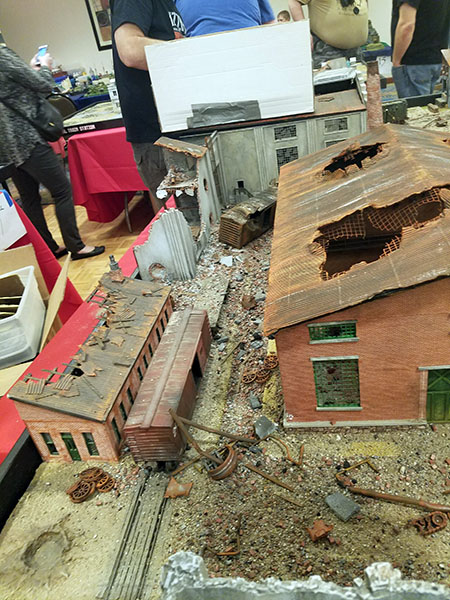 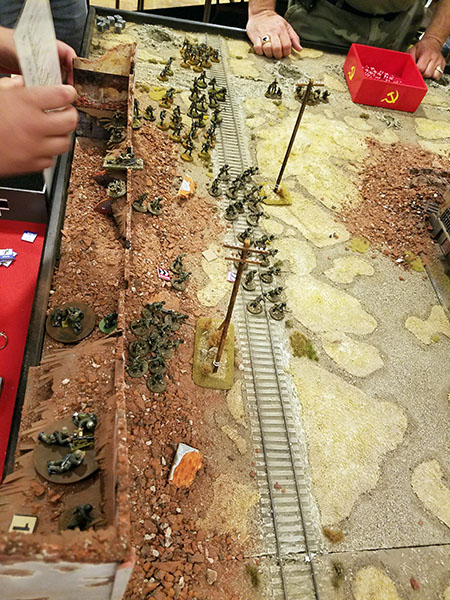 While most players were familiar with the Bolt Action rules, about half were new to the rules. One gentleman had a fully painted German force but hadn’t had a chance to play yet. He was excited when he used his German ME-109 model to mark the target of the airstrike he was trying to call in. The airstrike never came in, but he was happy to get to play and see that airplane model on the board. 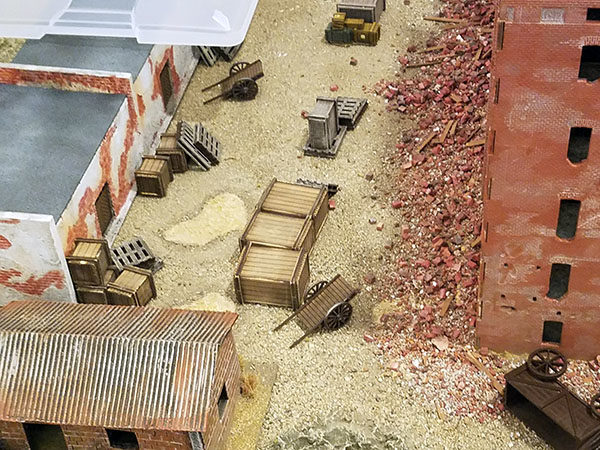 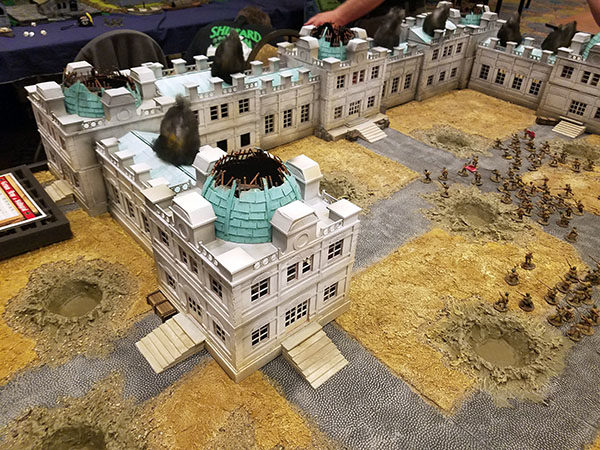 I had a lot of fun that weekend. I met some new Bolt Action players, all of whom were fun to talk to. I got to meet Tony, and we had a long and fun conversation about terrain building. And I got to see these beautiful tables first hand. I’m looking forward to going back next year!

Get more models on that table!