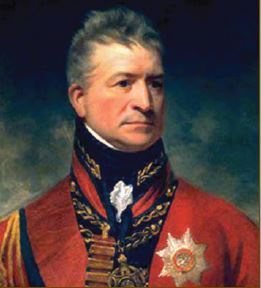 Born in 1758 in Pembrokeshire, Wales, he joined the 12th Suffolk Regiment of Foot in 1773 as an ensign. His initial army career ended in disillusionment when the 12th were disbanded in 1783.

He rejoined the Army some eleven years later, acting as an aide-de-camp in an expedition to the West Indies, which led to a colourful period of his life involving military expeditions, island governorship, slave trading and several court cases as a defendant. He was eventually acquitted, his reputation upheld, and he was promoted to Major-General in 1809 when he took part in the ill-fated Walcheren expedition. In 1810 he became a divisional commander in Spain, personally asked for by Wellington.

Picton became one of the ablest infantry commanders in Wellington‘s Army, capable of carrying out any task as long as it was clearly outlined to him. He was fiery-tempered and sometimes ill-mannered and uncouth. He was famed for favouring civilian clothes in war and fought the Battle of Bussaco in a night cap. Respected if not loved by his men of the 3rd Division, ‘the Fighting Third’, Picton was a valiant and decisive leader whose determination in the face of the enemy produced results time and time again.

His campaigning during the Peninsular War took a heavy toll on his health and mental state; causing him to leave the service in 1814, his nerves shot. He later reluctantly returned to Wellington‘s side for the Hundred Days’ campaign, despite premonitions of his own demise. Sadly these premonitions came true when he was shot in the temple whilst leading the 5th Division at Waterloo, after being wounded at Quatre Bras.