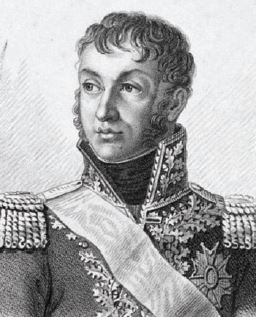 Junot was born in 1771 to a middle class family and he was studying law in Paris when the French Revolution began. He immediately connected with the revolutionary cause and joined a battalion of volunteer infantry, showed great promise and was promoted to Sergeant.

He was probably the man who knew Napoleon the longest, their paths crossing at the Siege of Toulon in 1793 when Junot became Bonaparte’s aide. Hanging on to Napoleon’s coat-tails, he rose through the ranks and served with distinction in Italy, but the severe injury he received in this campaign changed his character.

He was promoted General de Brigade in 1799, and managed to gain the post of Ambassador to Portugal before joining Napoleon’s side at Austerlitz. Junot was entrusted with the invasion forces that entered Portugal in 1807, and he quickly established control of the country. This resulted in him being given the title Duc d’Abrantes and becoming the governor of Portugal. British involvement in the Peninsular War saw Junot become the first of Napoleon’s generals to be defeated by Wellesley and sent packing back to France.

He returned to the Peninsular War as a Corps commander in Massena’s army in 1810, but later returned to France wounded. His generalship was mediocre and sporadic during the Russian campaign and on his return to France in 1813 he sadly committed suicide.

A brave man who suffered battle injuries which affected his judgement, he was sometimes cool and calculated and on other occasions rash. He was, shall we say, temperamental – at best!