Carentan was a small town of about 4,000 people. It also happened to be right next to the N-13 highway as well as the Cherbourg-Paris railroad, and sat in between Utah and Omaha beaches. Soon after the invasion of Normandy, this sleepy French port town would become a critical objective. The day after D-Day, Omaha and Utah beaches had still not been linked together. The Americans had planned on merging the two beachheads shortly after landing, but the staunch defence of Omaha stalled this plan. Worse, there was intelligence indicating an impending counter-attack by three German divisions. If the Germans were able to drive a wedge between the American beaches, they might be able to turn the tide of the invasion against the Allies. Sealing the gap was absolutely essential. 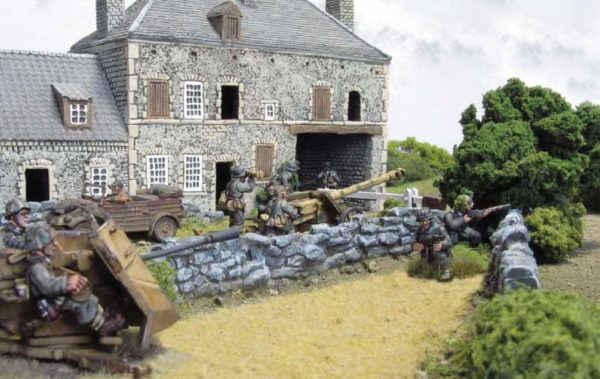 With all the convergent roads and railways, Carentan was the perfect place to link up the two beaches. Its capture would also put the Allies well on their way to taking the strategic port town of Cherbourg and securing the Cotentin Peninsula. Once the peninsula was secured, the Allies could begin their drive towards Germany.

The US 101st Airborne was the natural choice for the job. It had dropped into France in the first few hours of D-Day, and was operating in the southern flank of the Utah sector. After it successfully took St Come-du-Mont, the troops set their sights on Carentan.

The geography was excellent for static defence. Rommel had flooded the nearby plains, making infiltration on foot difficult and nearly impossible by vehicle. The Americans would have only a few dry approaches to the town, and Rommel ensured that these choke points were well covered by artillery and machine gun pits. To top it off, he sent some of his best troops – the crack Fallschirmjäger-Regiment 6 (the 6th Parachute Regiment) – and ordered them to hold the town to the last man.

The plan for the American paratroopers was to cross the Douve River using a pincer action. The 327th Glider Infantry Regiment would take the east crossing, while the 502nd Parachute Infantry Regiment would cross a series of four bridges from the south-east. The glider infantry would take the town from the north, while the paratroopers would seize Hill 30 overlooking the area to prevent the Germans from escaping.

The attack commenced just after midnight on 10 June. It was almost immediately stymied when the US paratroopers encountered a bridge blown up by the Germans, and the engineers assigned to repair it found themselves pinned down by artillery fire. A small detachment was able to cross in a boat, but was soon spotted and came under small arms and artillery fire. The boat returned and the attack was postponed. The glider infantry began their attack shortly afterwards.

Within a few hours the entire regiment made it across the lower Douve. They turned south and began to move towards Carentan, taking heavy casualties as they drew close to the town. At midday, the paratroopers had returned to the bridge, only to find it still untouched by the engineers. Lt Colonel Robert Cole, the commander of the 502nd’s 3rd battalion, held his resolve. Under his direction, his men used building materials left by the engineers to make a footbridge, and began crossing the river in force.

Soon they were at the fourth and final bridge before getting to the town. Cole’s men were almost immediately pinned down by machine gun and artillery fire as they crawled across the causeway towards their objective. They were even strafed by a pair of Stukas in a rare breach of the Allies’ air superiority.

With little or no cover and a lot more ground to cover, the Americans lost nearly 70 per cent of their numbers. That stretch of highway became known as ‘Purple Heart Lane’. That night, the paratroopers were able to get closer to their enemy under the cover of darkness. Cole realized he had an opportunity to take the Germans by surprise and ordered a bayonet charge. He told his second in command to wait for artillery smoke to hit, and then take the nearby farmhouse. The smoke hit, and Cole charged into it, blowing his signal whistle. Running full-tilt, he looked back to see almost none of his men following him; he was nearly alone.

Somehow, a communications error had resulted in the order not getting passed down to the rest of his battalion, so only the 20 or so soldiers in Cole’s immediate vicinity came with him. His second in command realized the error and led 50 more to follow up into the attack. It was a disaster in the making, but Cole rallied his battalion and got them on the move. The charge was a success, although a costly one. The Germans had been hiding in the hedgerows behind the farmhouse, using the house itself as bait. Once the paratroopers got near it, the air exploded with small arms and mortar fire. The attacking paratroopers managed to fend off the Germans and take the farm. The Americans were just outside the town.

The glider infantry had a tough time of it as well, attacking as they were from the north. They too would be stopped short of Carentan by intense small arms and artillery fire. As night fell, the Americans were dug in deep on the outskirts of the town – bloodied, bruised, and unable to push in further.

The German Fallschirmjäger had fought hard to defend this strategic area. Casualties were mounting. They were nearly out of ammunition and other supplies. They needed fresh reinforcements. The German commander decided to secretly withdraw most of his men that night, leaving only a small rear guard in the town. His plan was to rearm his men and return at the tip of an aggressive counter-attack to retake the town. 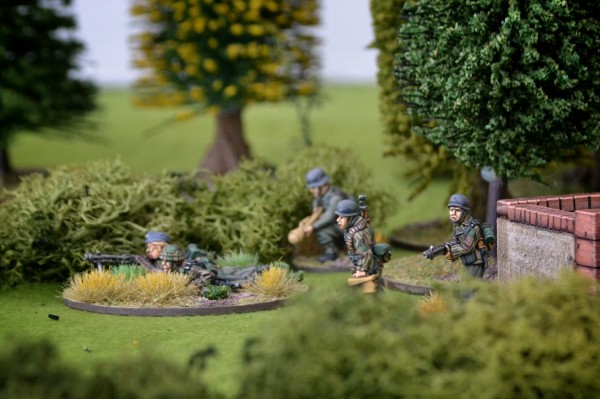 The Americans renewed their attack early on 12 June. The rear guard defended the town valiantly, but they were overwhelmed by the attackers. As the sun rose, the US paratroopers coming in from the south-east and the glider infantry coming in from the north met in the middle of town. Carentan was secured.

That afternoon, the US paratroopers advanced south-west to set up a perimeter around the town. They were attacked by fresh German troops and stopped cold, though the Germans likewise were unable to break through into the town. The sun set on hundreds of dug-in troops along both lines, each unable to shift the other.

The next morning, just as the Americans were about to attack the German lines, they were suddenly hit with intense fire from the counter-attacking Germans. Unbeknownst to the US commanders, the 17th SS Panzergrenadier Division had finally arrived, after being delayed by repeated Allied air attacks and their own lack of fuel. The ground shook from the impact of the German guns, and the beleaguered US paratroopers found themselves outnumbered and outgunned.

The US line began to collapse under the weight of the German attack, until only a single US company remained: Easy Company, 506th Parachute Infantry Regiment. The men of Easy held the line until their brother companies could be rallied. It would prove to be a turning point in the battle for Carentan, as this delayed the Germans long enough for help to arrive.

Help came in the form of the US 2nd Armoured Division. They thundered into the area just after lunch on the 13th blasting away at the German attackers. The counter-attack had been repelled, and Carentan was safely in Allied hands. 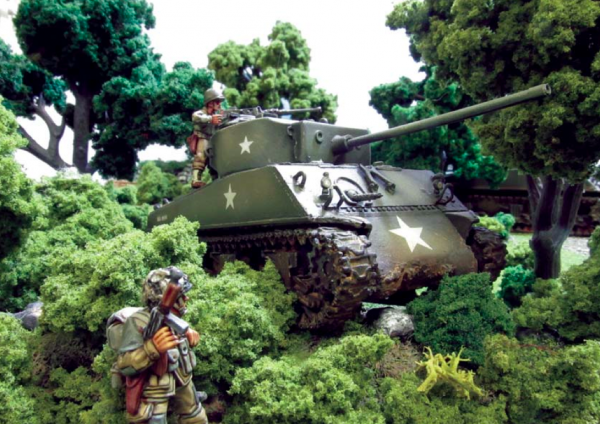 To read more about the battle for Carentan, why not head over to the webstore and grab a copy of our ‘Battleground Europe: D-Day to Berlin’ Theatre Book – which is packed with historical information on the Allied push from the beaches of Normandy, through Western Europe, and on to Germany… packed with new scenarios, characters, and Theatre Selectors – it offers a whole slew of new options for budding Bolt Action commanders!