We’re continuing our look at some special characters from the D-Day book with the brilliantly eccentric Captain Colin Maud RN.

Maud’s wartime service included destroying and capturing numerous enemy ships and submarines, taking part in the Second Battle of Narvik, the Dunkirk evacuation, the hunt for the Bismarck, the Spitzbergen raid, Malta convoys, and Russian convoys. He was awarded the Distinguished Service Cross and Distinguished Service Order and once survived an hour in freezing cold water after his destroyer was sunk by a U-Boat, a feat that he credited to downing a bottle of whiskey before jumping into the sea. After this, he ordered the sailors under his command to always carry a bottle of whiskey in case it was needed. 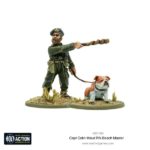 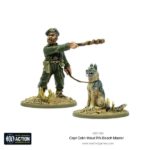 Maud acted as a technical advisor for the 1962 movie “The Longest Day”, during which he was played by Kenneth More. He allowed More to use the actual shillelagh which he had carried at Juno Beach for his scenes, although Winnie the German shepherd was replaced with an English bulldog.

Commander Maud was selected as the principle Beach Master for Juno Beach during the Normandy landings, for which he was made an acting captain. Complete with his German shepherd, Winnie, Maud too charge of the arrivals and departures on Juno Beach under heavy enemy fire. With his dark beard, shillelagh (a wooden club of an Ancient Irish design) and dog, Maud cut an imposing figure on the beaches, sometimes swimming out to landing craft to point out errors in handling to their crew. His ruthless efficient in running his beach and almost comical disregard for danger resulted in a bar to his DSO.

You can find rules for more iconic characters in our brand new campaign book; D-Day: Overlord. You’ll also find a wealth of background information, along with new units and theatre selectors!

Tom spends most of his time buying books and painting miniatures. He enjoys putting animals on the bases of his miniatures and half-finishing side projects. Some say that he lives in a tower on top of some windswept northern hill with his wife and cow-patterned cat, Spaghetti.
View Profile | View all posts by Tom Mecredy
Pre-order: SPQR – A Clash of Heroes Starter Set
Pre-order: the Il-2 Sturmovik squadron