In today’s head to head, we take a look at the American built M3 Stuart/Honey, and its desert rival, the Italian M13/40. 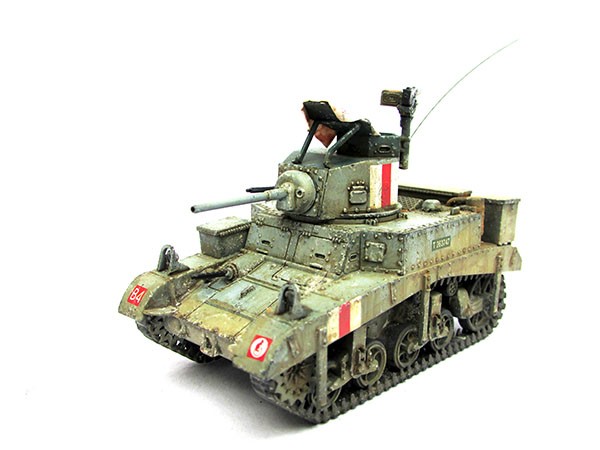 Development of what would eventually evolve into the M3 Stuart began in the late 1930s as the United States sought to modernise and improve its armoured arm in light of the developments in armoured vehicles in Europe. The American doctrine initially called for a light tank with a machine gun armament to fulfil a scouting role in cavalry formations, however this was swiftly deemed to be insufficient and later variants were armed with a 37mm gun. This vehicle was named simply, the M1 Combat car. 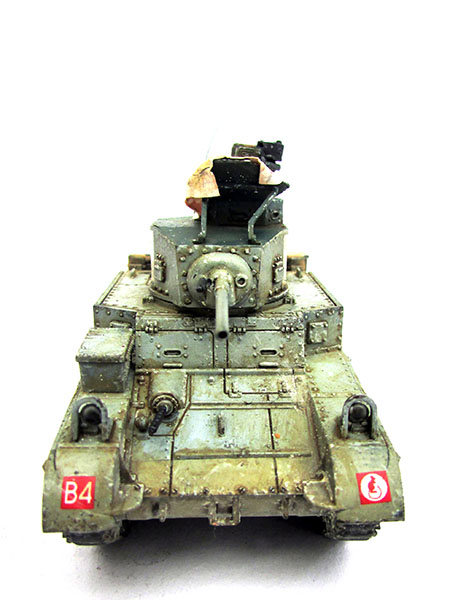 The M1 swiftly evolved into the M2 which was largely; a better armed vehicle with 2 small turrets and a machine gun in each turret. Similarly, to the M1 it switched the machine guns to a 37mm gun in the later models. None of the M1s were ever used in combat, however some of the 37mm M2’s were used at Guadalcanal with the USMC in 1942. 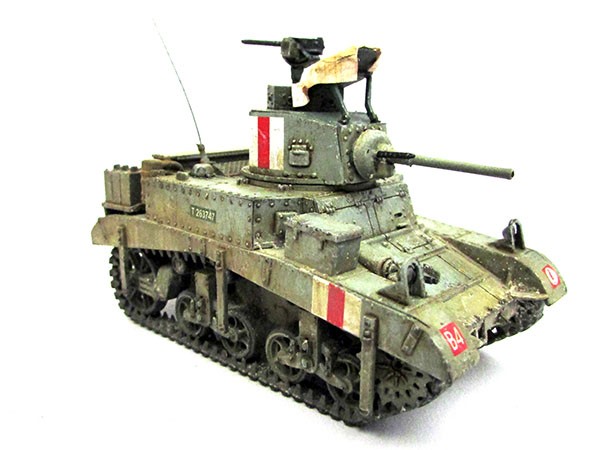 By 1940 the M2 was also starting to display some short comings, and the design was further refined into the M3 Stuart. The perceived role of this vehicle had moved on into supporting a highly mobile battle with the role of the M3 being that of a scouting and reconnaissance platform, as well as forming a screening unit to protect the flanks of actions. Entering production in 1941, the new vehicle was well protected for a vehicle of its class, with armour up to 51mm thick, whilst retaining a maximum road speed of around 36mph. 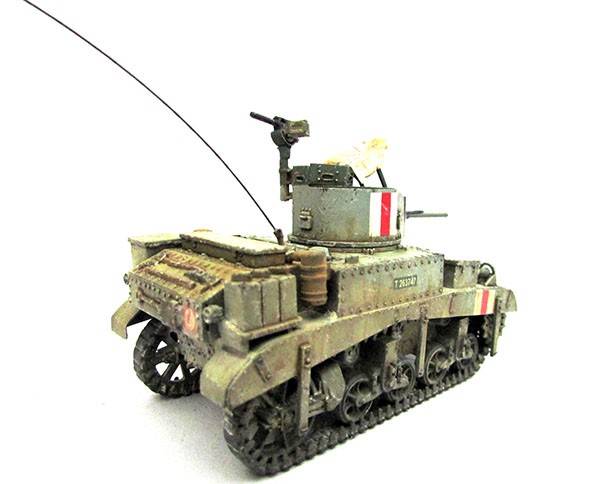 With the first vehicles rolling off the assembly line, these were supplied under lend lease to British and Commonwealth forces, and the first of the M3’s went into action with British forces in November 1941. Known in the American forces as the M3, the British took to naming US supplied lend lease vehicles after famous American Civil war generals, with the names eventually sticking with US troops too. 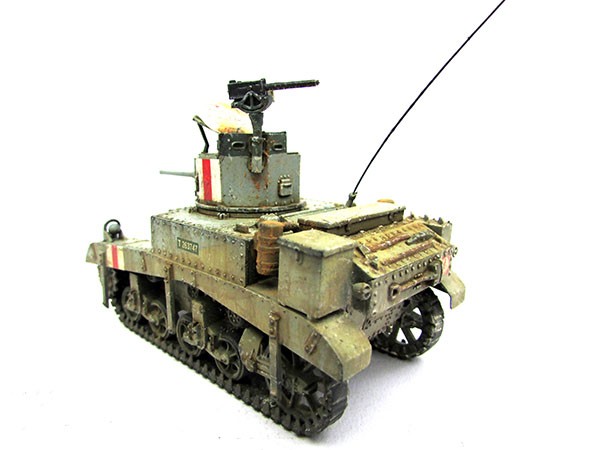 The Stuart was well liked by its crews although, initially entering service there were some teething problems present, mostly due to crew training and familiarity, these were swiftly overcome. The Stuart picked up a second, less formal nickname at this time from the British forces, the ‘Honey’. The reason behind this is a little murky, but seems to boil down to either being due to the comfort of the ride, the ease of driving, or the fact the tank was significantly more reliable as well as being faster than the Crusader tanks it served alongside.

The M3 Stuart was produced until 1943, when the design was further upgraded to the M5 variant, though M3s soldiered on until the end of the war, serving in large numbers both in Europe and the Far East. The Stuart was fairly quickly obsolete in the European Theatre, however, it proved to be more than a match for Japanese armour it encountered. 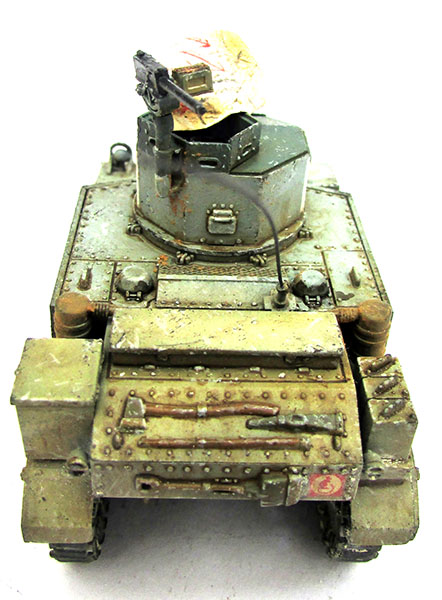 Surprisingly, unlike many vehicles of the Second World War which were swiftly replaced by more modern machines, the Stuart saw considerable service post war Latin America, with Paraguay operating their vehicles on and off until at least 2016.

The Stuart has also enjoyed a long career on the silver screen and pop culture, notably appearing in the classic James bond film Licence to Kill, a 1967 episode of Batman, DC Comics series ‘The Haunted Tank’, amongst many others. Most notable of all of these however is the M5 Stuart that serves as the titular tank in 1995 cinematic masterpiece, Tank Girl.

The M3 Stuart/Honey in Bolt Action 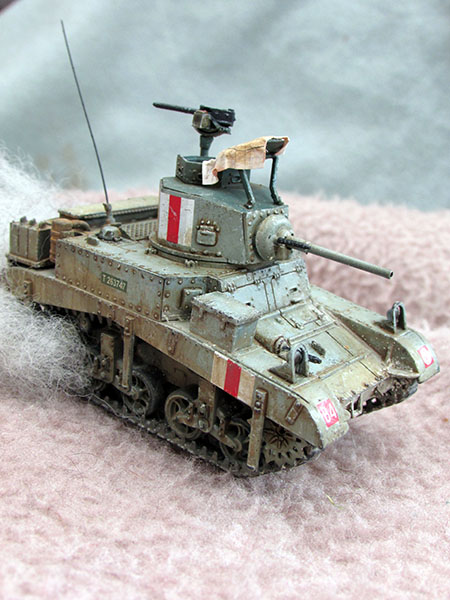 The Stuart is present in both the Armies of the US, and armies of Great Britain books, and today I’ll be looking at the Stuart from the context of the British Army, using the M3A1 Stuart III entry, as I opted not to fit the extra hull machine guns as I was representing at tank from the battle of El Alamein.

The Stuart is a very cheap addition to a British force, coming in at 115 points for a regular vehicle and taking a tank slot. The only option for the vehicle is for it to have the turret removed and used as the recce variant, this makes it 25 points cheaper and replaces the turret with an HMG, although it then becomes open topped whilst gaining the recce rule. 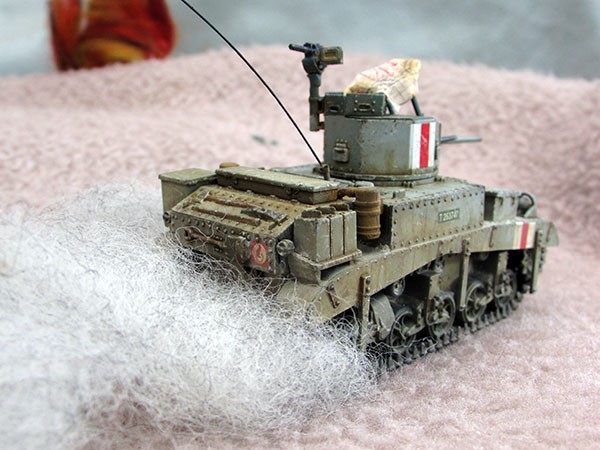 The standard Stuart is armour 8+, and is armed with a light anti-tank gun and 2 medium machine guns, one hull mounted the other coax with the anti-tank gun. When constructing your army, the Stuart works best as either a flanker, or supportive vehicle for harassing snipers, mortars, and anything else that may be a threat to your infantry. Throwing out either 10 machine gun dice or a blast and machine gun, it shouldn’t require too much luck to destroy these weapon teams, or even pin and threaten enemy infantry squads, especially those armies with large, and inexperienced squads.

Be very wary of return fire however, having an armour 8+ the Stuart is very vulnerable to anything but the lightest of fire. An anti-tank rifle can hurt a Stuart with some lucky dice rolling, and any dedicated anti-tank gun has a better than even chance of getting straight through your armour. Compounding this, the riveted construction of the Stuart means that any hits to the side or rear gain a further +1 to their penetration rolls, in addition to the already present bonuses… 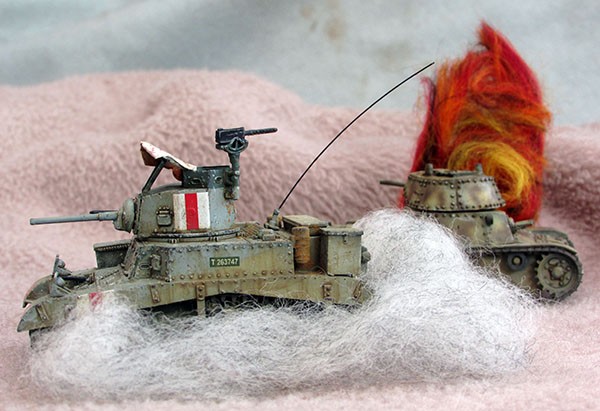 In tank wars, the Stuart is quite effective as it’s so low in points that you can have 2 for the price of one Panzer IV with a long barrelled gun, and with luck you can swamp enemy armour with numbers and pins before they can take you out. With only a light Anti-Tank gun, the Stuarts best chance of killing medium vehicles or heavier you will have to either outflank to get some side or rear to take out opposing armour from its weaker angles. The light AT can only damage heavy tanks from the side though, and super heavies from the rear… Though this can at least force heavier opponents to keep moving and take an accuracy hit. 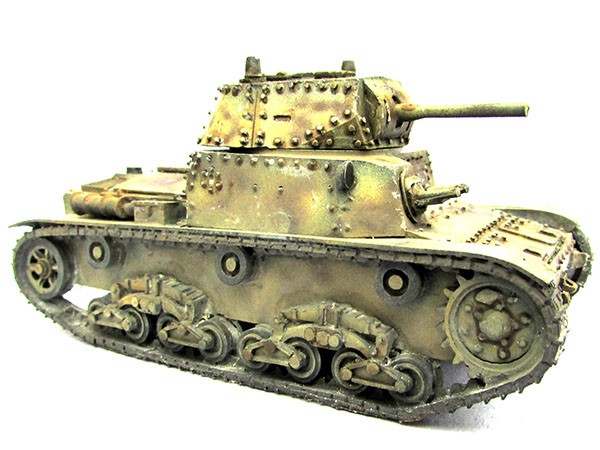 Italian tank design in the interwar period, had a heavy focus on light tanks suitable for colonial policing type actions, notably the L3 tankette. As a bridging development, the Italians developed the M11/39 tank, which featured its main armament in a hull mounted casemate, with a turret machine gun armament. 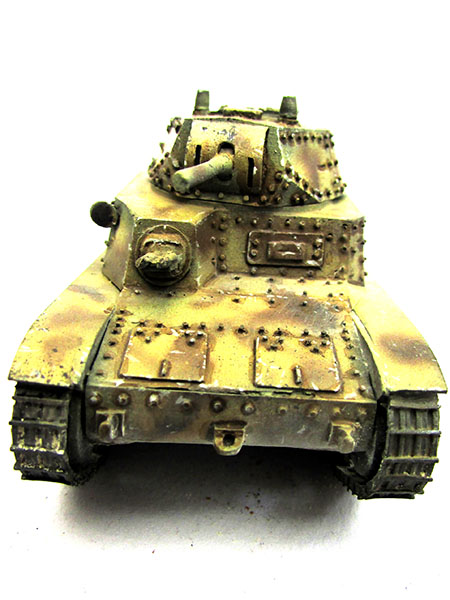 The M11/39 was intended as a stop gap design until more capable vehicles could enter service, and this development lead onto the M13/40. The M13/40 retained the lower hull and suspension of the M11/39, however featured a new hull with a bolted construction, and turret with a 45mm gun. The M13/40 also had significant secondary armament, being equipped with a pair of machine guns in the hull with a third coaxially mounted with the 45mm anti-tank gun, additionally, a fourth Breda light machine gun could be fitted to the turret for anti-aircraft use. 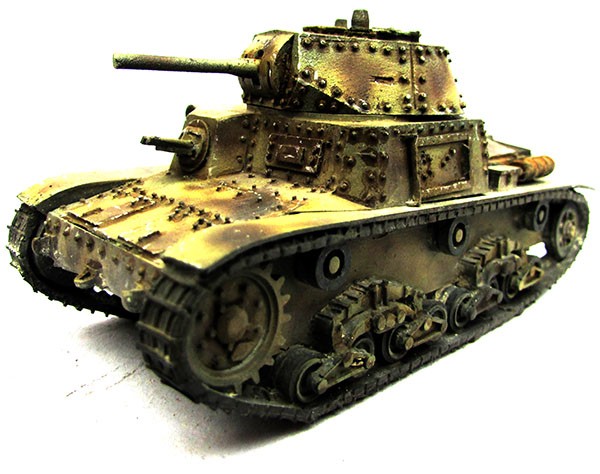 Entering service in 1940 the M13/40 had roughly 2000 units produced by FIAT before production ended in 1942. The vehicle was found to be reliable and well-armed, although a little under powered and slow, with a top speed of around 20mph. Armour thickness was only 42mm at best, and to supplement this crews often supplemented the tanks armour with sand bags and spare track tread, however this served to overload the vehicles already over stretched engine, having a negative impact on both the speed and reliability of the M13/40 for marginal increases in protection. M13/40’s were not equipped with a radio, though these were later fitted to some vehicles. Prior to this, communication was carried out utilising signalling flags. 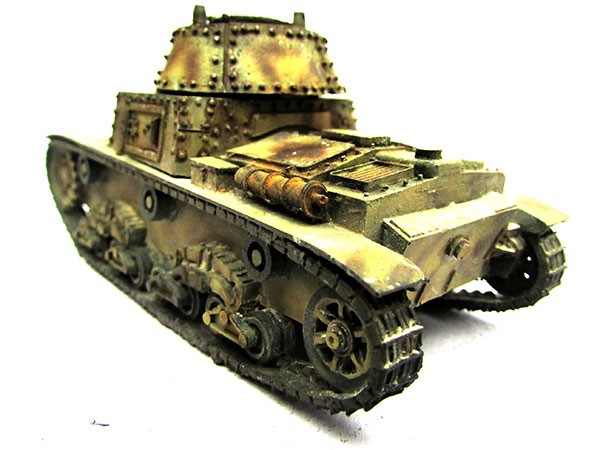 The M13/40 first saw action in the Greek Campaign in late 1940, however its first major engagements were during Operation Crusader between late 1940 and early 1941. Due to very limited training, these engagements did not go in the Italians favour, with large numbers of men and machines being captured. 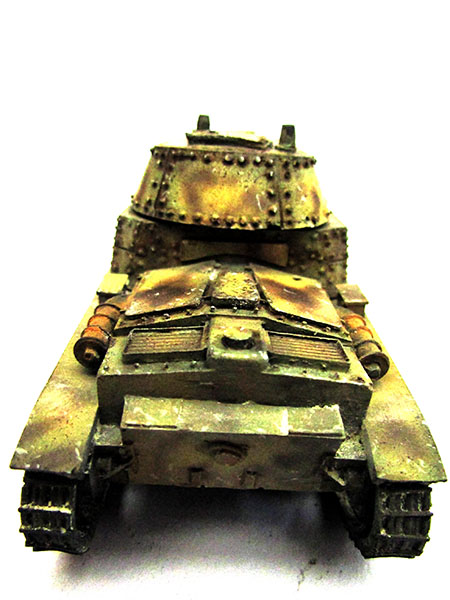 Due to shortages of equipment, and with an abundance of M13/40’s the captured vehicles were pressed into service by both British and Australian forces, with the Australians using their vehicles in the defence of Tobruk where they could be identified by large kangaroos painted on their hulls and turrets. 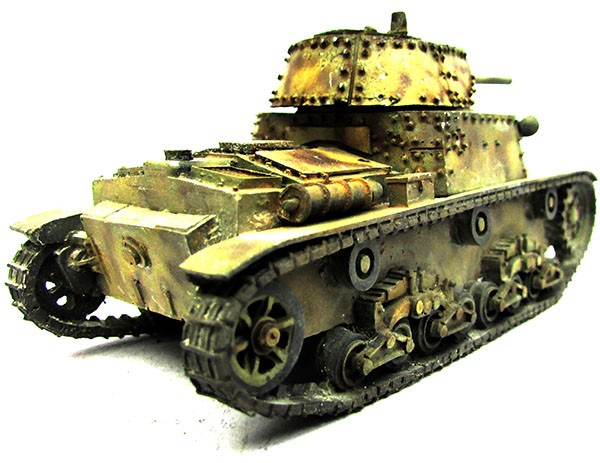 Serving in Italy, Africa, and the Balkans, though never deployed to Russia. The M13/40 was also used by German forces in anti-partisan policing actions, notably in Yugoslavia. The tank was found to be a capable light tank, though crew training did lower the perception of the tanks performance compared to its contemporaries. 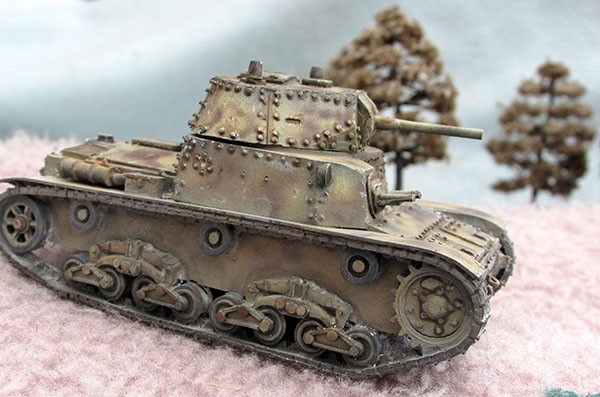 Whilst the M13/40 was a little lackluster in its wartime service, in Bolt Action the tank is a superb anti-infantry platform. 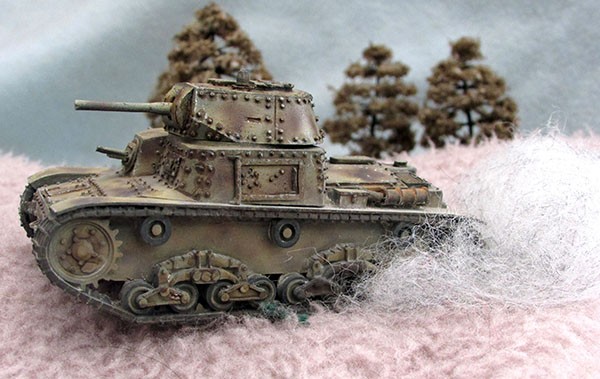 Costing 125 points at regular, although having only armour 7+, initially this may seem a bad deal. However, the tank has 3 medium machine guns to start with and can have a 4th as a pintle mounted weapon (though using it renders the tank open topped and costs 15 points). This means you can potentially have a staggering 20 shots at up to 36” of range. Pouring this into a squad even in a building has a good chance of causing casualties, but catching a gun team or small unit will likely see the target removed in one turn. 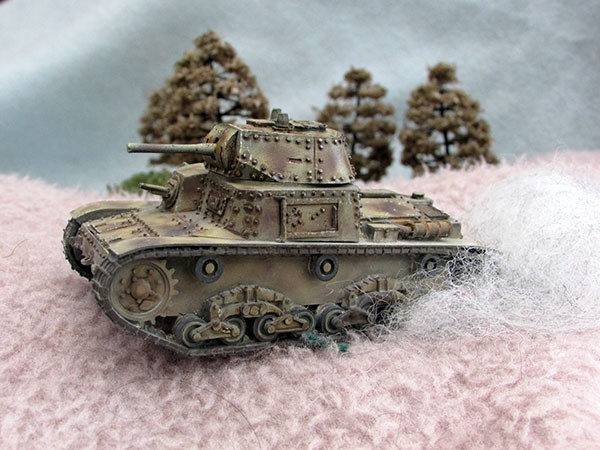 With anti-tank weapons getting blasts now under the second edition rulebook, the light anti-tank gun can start to be used to damage enemy infantry in cover or bunched up at the expense of firing the Coax machine gun.

It’s probably wise to not try using your M13/40 for anti-armour work however, as most vehicles won’t break a sweat busting the 7+ armour, especially as the tank also has the vulnerable rule as described for the Stuart above. The havoc the M13/40 can wreak on enemy infantry I feel more than makes up for this however, especially when used to sure up a flank or guard an objective. If you can get 2 in a list they will be especially effective supporting one another and spearheading an advance. 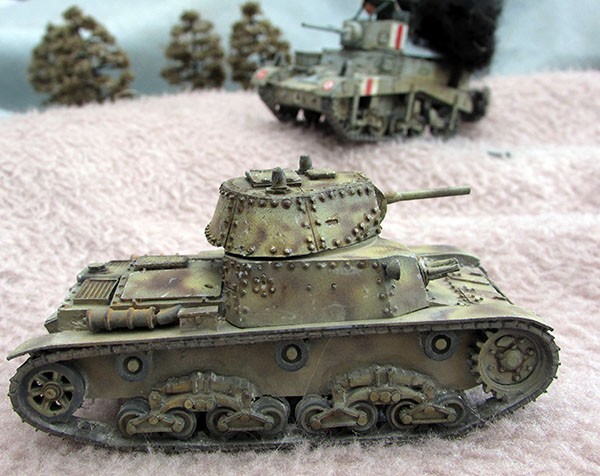 Both tanks are a low points armour option for a force, and provide sterling work in infantry support and harassment roles. If you can get 2 of them into a platoon especially, they will really work wonders, but might lose you some friends in the process…

Grab these tanks in store! 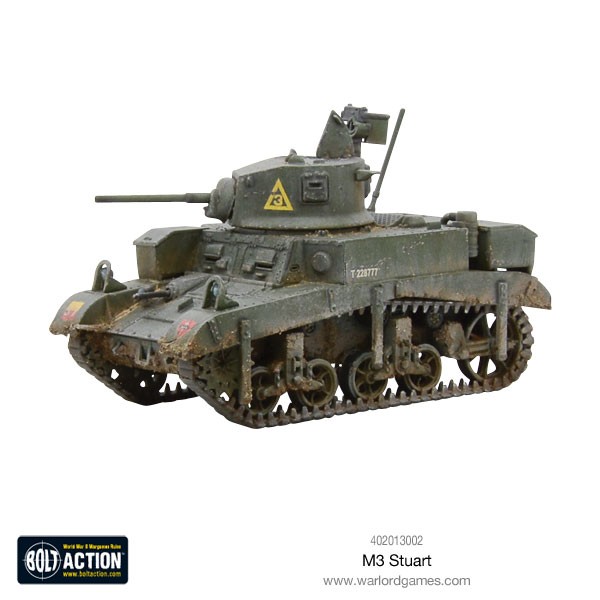 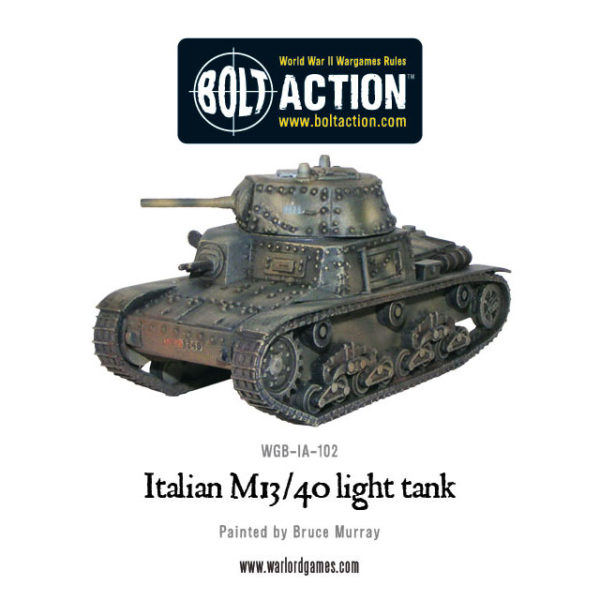