Warlorders Bernard and SteveM go head to head with an Isorian V Boromite 2000 point battle – The Incident at Kivan Prime! 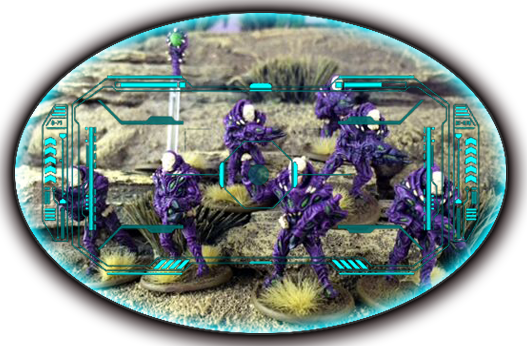 The backwater planet of Kivan Prime was not the sort of place that Tas Geren’do would expect to find himself, but no Boromite mining master could pass up the opportunity of such a supply of Rhenium. The world was practically made of the stuff.

No sooner had mining operations started in earnest than the discovery was brought to the attention of the Isorians. To be fair, Kivan Prime was firmly in Isorian territory and conflict was always a risk. Fortunately for the expedition, Boromite miners also make formidable warriors and Tas had enlisted his best crew.

The following is a 2000-point battle report involving Boromite and Isorian forces as the Isorians aim to drive a mining expedition from the surface of Kivan Prime, a planet within the Isorian Shard. 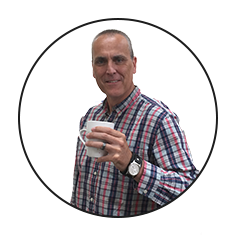 Handler with 3 Lavamites, 2 Hatchling Swarms and a Borer Drone – 129 pts

Handler with 3 Lavamites, 2 Hatchling Swarms and a Borer Drone – 129 pts

Steve: “This force is based around the formidable close-range threat of the Work Gangs and Lavamites and themed around a large mining complex (hence the Hauler to take the minerals off planet). The Brood Mother also gave a long-range weapons threat and could anchor one section of the battlefield, hopefully causing enough of a distraction to let the miners and their horrible devices (including Vorpal Charges) get up close and personal.” 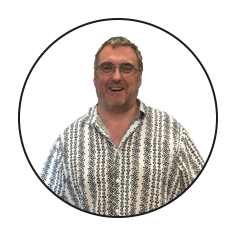 X-Launcher 1 with Spotter Drone and all ammo – 90 pts

X-Launcher 2 with Spotter Drone and all ammo – 90 pts

Bernard: “This Isorian army is designed to be fast moving while able to pack a punch. Key will be to get the Tsan Ra (in their transport) into close quarters quickly against vulnerable support units while picking off the enemy close combat threats at long range. The various X launchers should keep the Brood Mother pinned down to minimise her impact on the battle to come.” 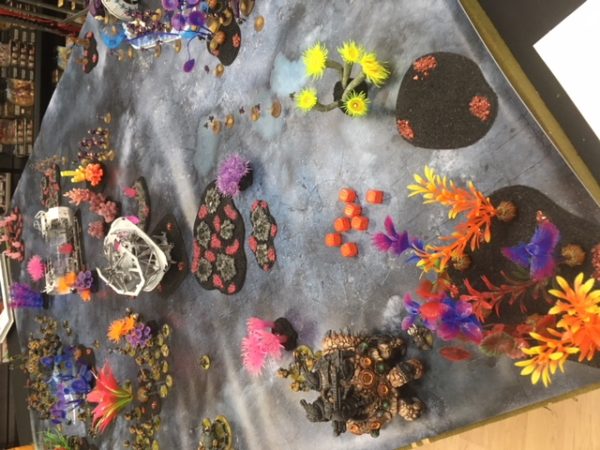 The opening Isorian moves saw Targeter Drones skimming across the battlefield to highlight key targets, the Brood Mother and Hauler get special attention. The Boromites reply is somewhat less subtle as two activations of the Brood Mother saw the Pulse Bike Squad disappear in a hail of Mag Light fire and the Tograh Transporter was immobilised by a lucky shot from the Hauler. This meant the Tsan Ra would now be on foot and pose slightly less of a threat. 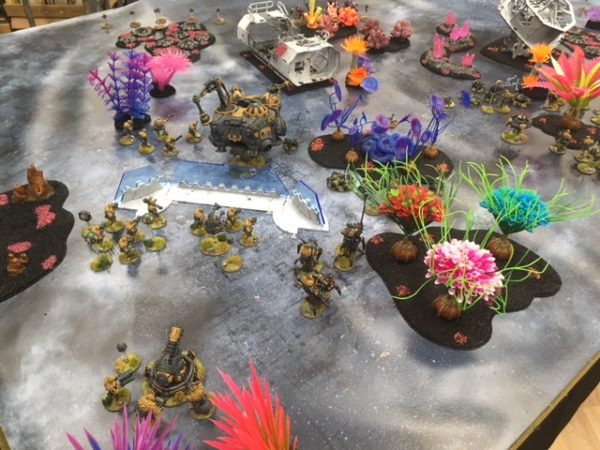 From his hiding place to the front of the Isorian lines, the lone sniper made good use of a targeter drone and wiped out the crew of the Heavy Frag Borer which had just damaged the Maran Vesh drone.

Despite promises of a cautious battle plan, Tas Geren’do ordered a mass advance of his Work Gangs across the line which attracted fire from Isorian ordnance.

On their right flank, the Senatex Command and Squad Alpha push forward to lay down withering fire on the Gang Fighters near the Old Wreck. Squad Beta moved forward in support and X-Howitzer fire killed two Lavamites and piled on extra pins, enough for a morale check but the handler managed to keep control of his rock beasts. 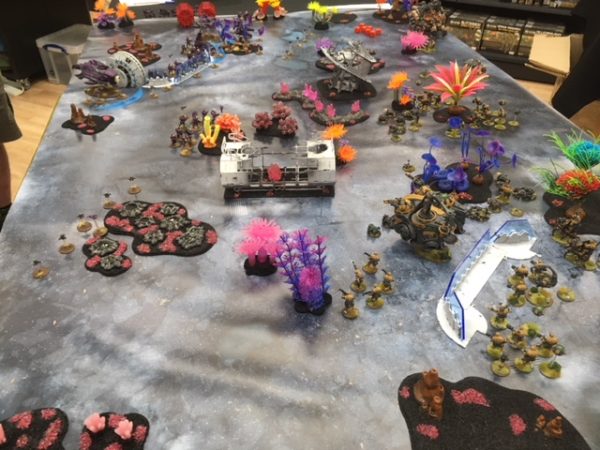 Rally checks were made by Boromite units receiving most fire and the rest surge forward again. A rash charge by the Rock Riders against the Senatex Command was repulsed and all three riders were killed.

The Tsan Ra attempt a charge but fall short and face withering fire from the Hauler, Engineers (Implosion grenades are rather nasty) and Mass Compactors (even nastier).

Work Gang 1 rushed forward into no-mans land in front of the Isorian kinetic barriers to take away some of the pressure elsewhere and manage to survive the turn.

The dice gods favour the Boromites at the start of the turn and three activations in a row see the release of five Vorpal Charges from three different units. Absolute carnage ensued as the Senatex Command and Squad Alpha both suffered severe damage and failed morale tests and broke. This left the Tsan Ra out on a limb and they took concentrated firepower from the Hauler and Brood Mother, who had rallied to get rid of multiple pins. 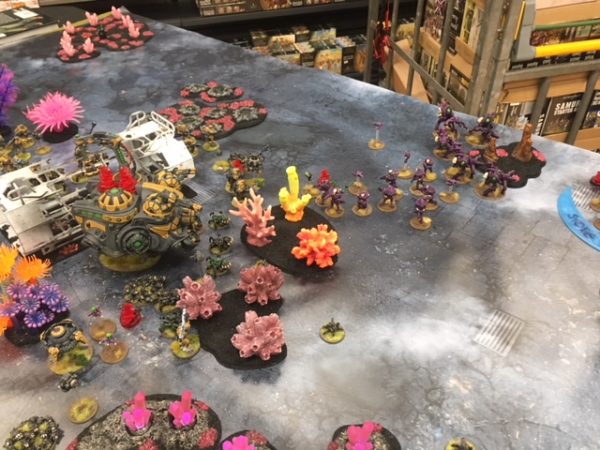 Critically one of the Vorpal Charges from Work Gang 1 (who had thought their time was up) went a critical 10’’ into the Maran Vesh Drone, which promptly failed its Agility test and vanished into the void.

The battlefield had turned into a very unpredictable environment with five Vorpal Charges moving randomly. Two-headed back toward the Boromite lines and narrowly fall short of Tas himself as he hurried to the fore. One, however, moved inexorably through the Isorian barriers and the Plasma Cannon was unfortunate enough to be in the way. 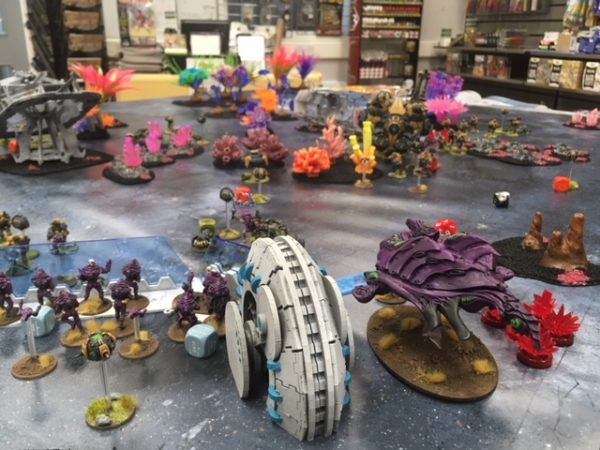 The Brood Mother and Hauler’s attention remained on the surviving Tsan Ra, and even this elite unit had seen enough and ran. A lucky Mag Mortar shot added insult to injury and the remaining Isorian forces decided that a bit of Rhenium really wasn’t worth the losses incurred.

A game that really hinged on a couple of key things going the Boromites way. Getting the Tsan Ra out of their transporter was a stroke of luck, and the Vorpal charges (unusually) went pretty much to plan (these nasty blighters normally come back to haunt the Boromites that launched them). Add to this some catastrophic dice rolling by Bernard and the Isorians were on the receiving end in this battle. I don’t think we have seen the last of the Senatex though, and Tas Geren’do’s expedition will be on full alert from now on.

Discover the Nexus:
A community portal and repository of knowledge for Gates of Antares including battle reports, painting guides and more…

Travel to the Nexus 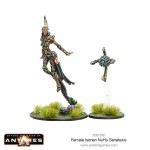 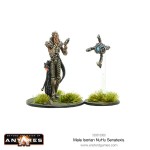 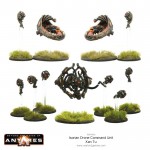 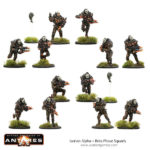 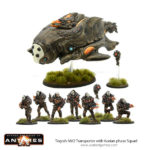 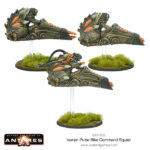 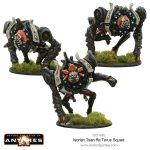 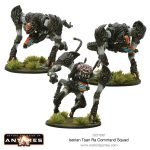 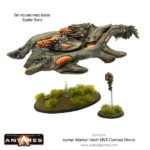 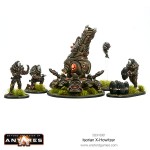 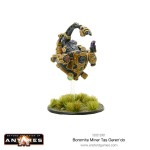 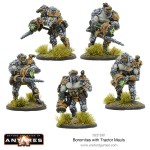 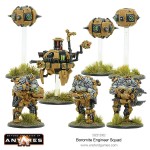 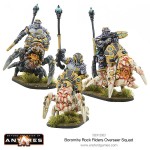 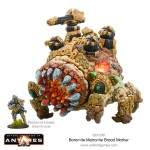 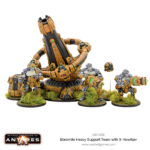 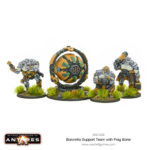 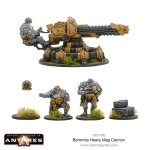 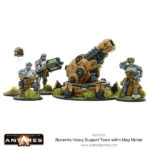 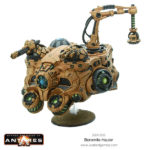