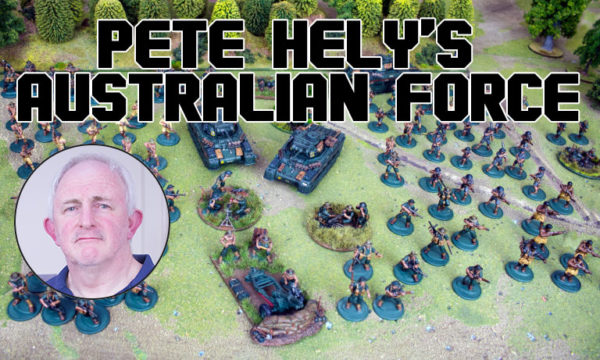 I present photos of my Bolt Action Australian WW2 Army and a brief technical and tongue in cheek account of its creation. 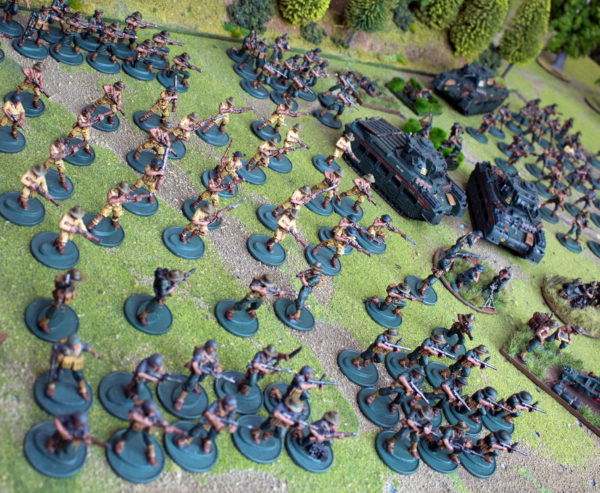 Being an Australian and a gamer I was very grateful to see such a substantial number of figures in the range. Well done Warlord Games! Where is the Militia Command Group?

I would like it noted from the outset that this “army” was not meant to be either historically accurate or representative of any particular unit. I am not that good a painter nor do I have the patience to ensure buttons, badges and kit are of the correct type and placement. 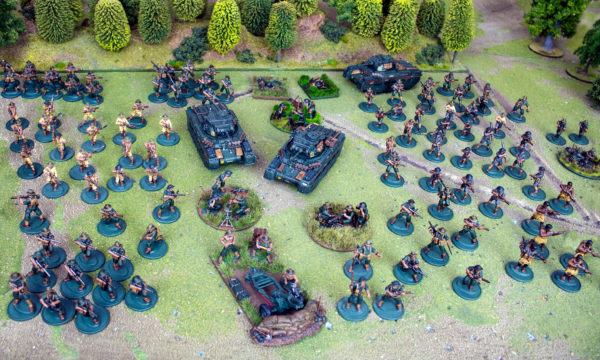 This was a project that took me seven months to complete and I didn’t paint a single eye.

WW2 is an interest of mine and the action in New Guinea in particular I find very interesting. The battles on the Kokoda Track are the stuff of legend. If you haven’t read anything about Kokoda, Milne Bay, Buna or Gona you have done yourself a disservice. So stop reading this and get a book out on ground operations in New Guinea during WW2, go on. 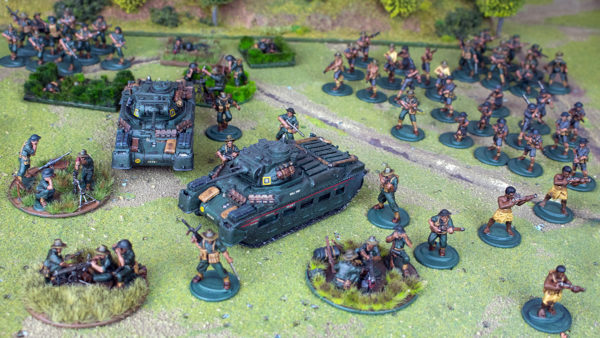 Now you have read up we will continue. So my army is as close as I could get to the Militia, Papuans and Regulars that fought in New Guinea and the South West Pacific theatres. At the start I wanted it to be as near to the real thing as possible. But as I got in to painting the figures it felt better (to me) to make it near enough. The aim was to paint an army of substantial size and diversity to deal with all and any Japanese force likely to be tabled. The other aim was to use the paints to hand as my budget was limited and I can be frugal. 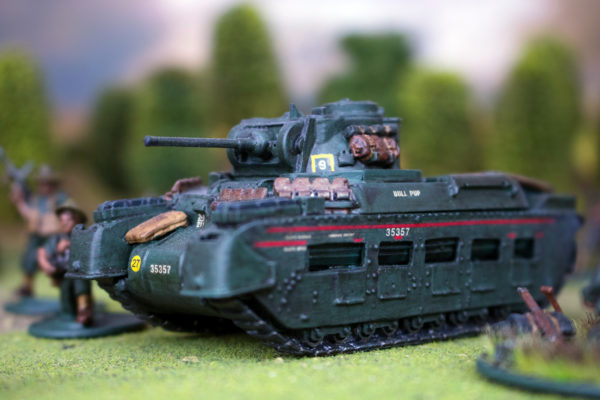 The elements of my army are: 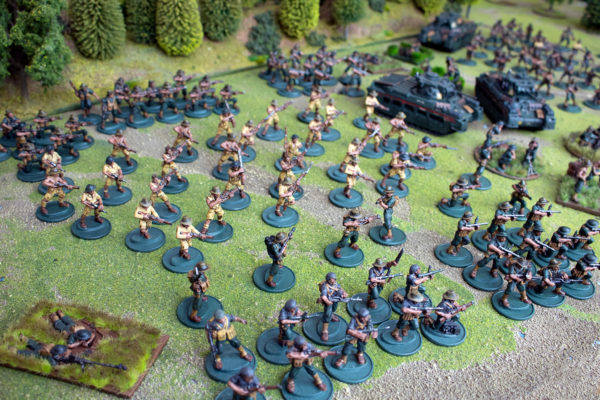 There was a need for me to mix the required colour for the Militia uniform and the webbing colour from my available paints. I don’t think I did too badly. They look pretty bloody good to me anyway.
I used the grey and subtle differences in green to show the uncertain and irregular supply of kit at the time (and to eke out the sand/beige mix). I think the Matildas are great. They look good and are hard to stop. The 25 pounder short looks like a beast, just a shame you can’t use canister rounds. 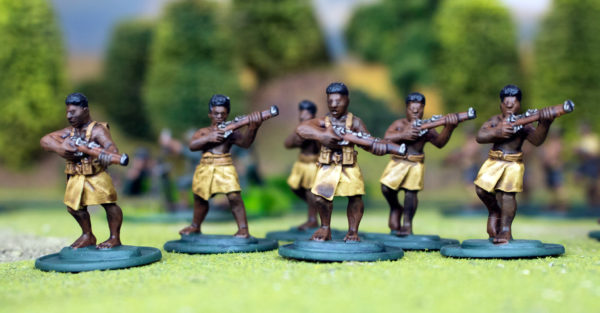 I didn’t do any modifying as I like the Warlord figures as they come plus I get to cast my own figures (as I’m part of the casting team at warlord) so they were perfect. No point modifying perfection. I like the feel of the metal and resin figures. No offence to plastic figures and those who prefer them, my preference is always resin and metal. I didn’t flock the infantry bases, no patience – remember, but I did “dress” the crewed weapons, rather well too if I do say so myself.

In my opinion, the Warlord New Guinea campaign book is the best in the Bolt Action range; please don’t rant at me about this as it is my opinion. If you still haven’t played from this campaign book yet, why not? The Japanese are a most dangerous foe and they are not prone to retreating. 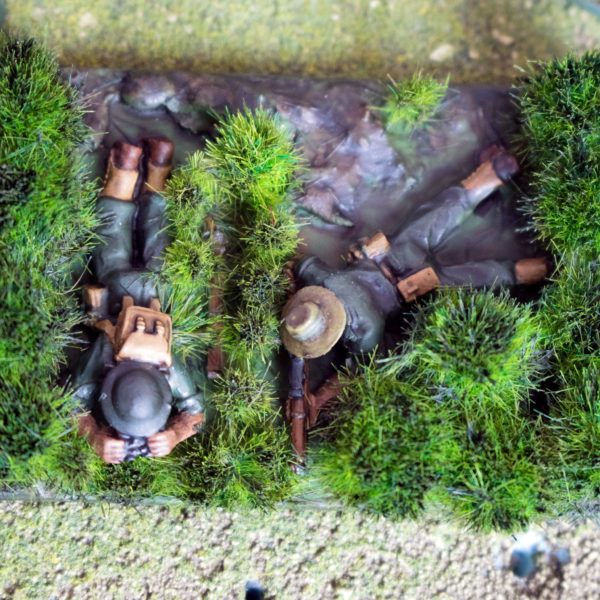 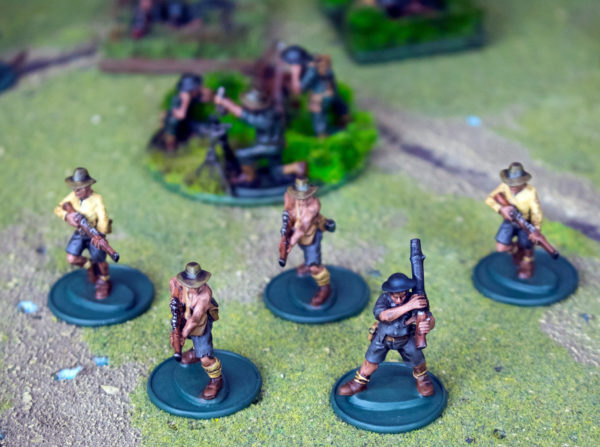 I am looking forward to future additions to the Bolt Action Australians… coming out today!

Pete’s Army on the Battlefield! 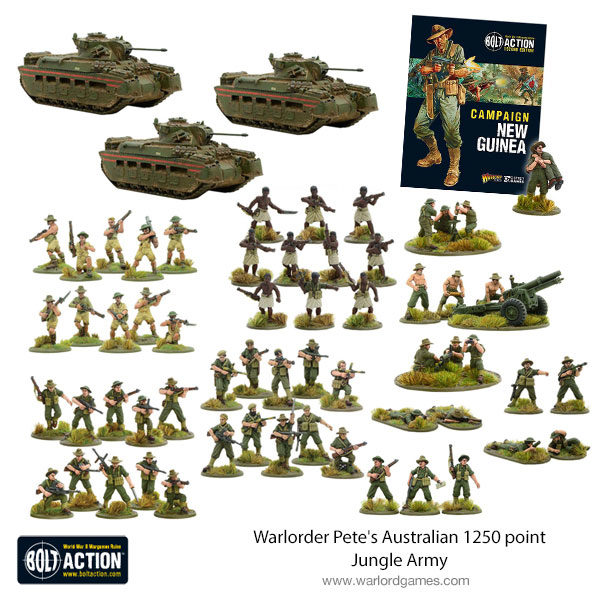 You can get Warlorders Peter Hely’s 1250 point list with this set! It also comes with the Bolt Action Campaign book: New Guinea for free! Additionally, it comes with a Flamethrower and a light mortar team allowing you to mix up his army and create it to be your very own force! 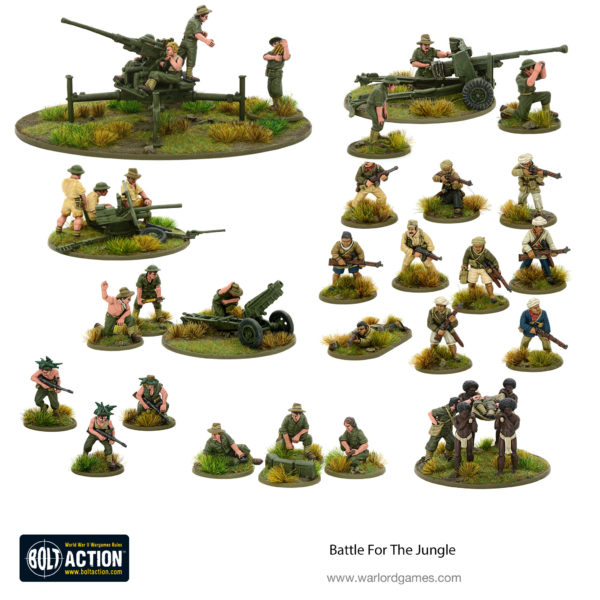 Reinforcements have arrived! Australia and her Allies and unleashed a new wave of men and equipment ready to beat the Axis forces back and to finally conquer the Pacific!