Frontline Report: The Rise of Macedon

Warlorder Tom takes a look at rise of Macedon, or Macedonia, under the leadership of Philip II. Although his son Alexander the Great is more widely known for his conquests, it was Philip who laid the foundations of Macedonian power. He prepared this once-weak nation to conquer one of the largest empires of the ancient world!

Philip II and the Rise of Macedon

Tom: Macedon’s meteoric rise from a small kingdom on the periphery of the Hellenic world to an ancient world superpower occurred in just 25 years, presided over by the administrative and military genius of Philip II and his son, Alexander the Great.

In the early 4th century BC, Macedon found itself surrounded by enemies. Their king, Perdiccas III had been killed in battle with the Illyrians along with 4,000 soldiers. Several pretenders backed by Thrace and Athens emerged from the woodwork, while the Illyrians and Paionians continued to ravage Macedonian territories. 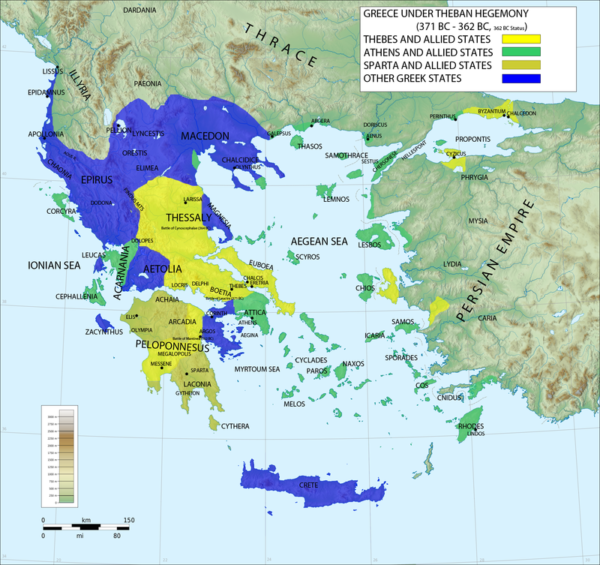 A map of the major Greek power blocks prior to the ascent of Philip II.

Philip II spent his early life as a hostage in Thebes where he received an outstanding military and diplomatic education in what was regarded as the leading city in central Greece at the time. He was tutored by several notable Theban generals and proponents of the famous Sacred Band.

Philip II became the regent of Perdiccas’ infant son in 360 BC, but went on to usurp the throne in a swift and bloodless coup.

Safely ensconced on the throne, Philip set about pulling his country back from the brink of annihilation. A series of diplomatic victories curtailed Athenian expansionism, while Philip’s reorganisation of the Macedonian military gave him the tools to score a series of crushing victories against his neighbours in Illyria and Thrace. 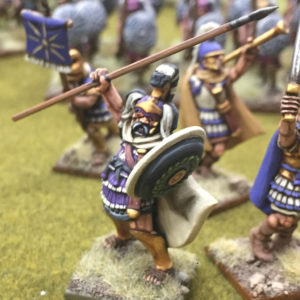 With his immediate threats neutralised, Philip turned his attentions to his meddlesome counterparts in central Greece. Starting with Thessaly, Philip began to play the various factions of against one another, eventually securing his position as archon of Thessaly. After spending a season campaigning in Thrace, he became embroiled in further conflicts with Athenian and Spartan proxies, eventually forcing them to the negotiating table after they were deserted by their erstwhile allies.

A brief peace ensued, during which the ever-restless Philip continued campaigning against all manner of enemies in the Balkans and Scythia, before being recalled by a renewal of hostilities with Athens.

After thrashing a combined Athenian and Theban force at the battle of Chaeronea, Philip began installing Macedonian garrisons across a defeated Greece and consolidating his power behind the newly formed League of Corinth. 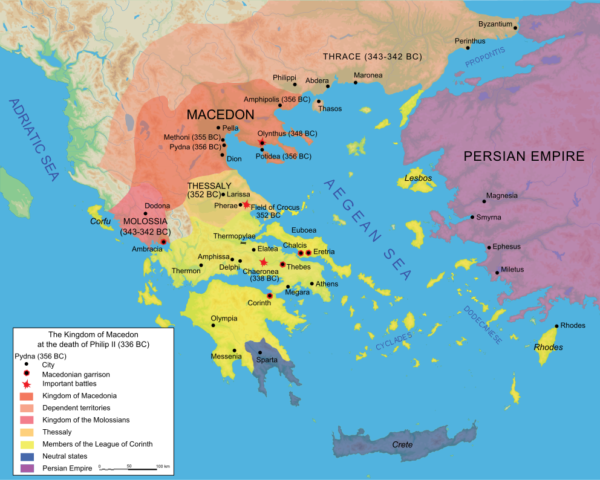 The extent of Philip II’s conquests at the time of his death.

With the newly-allied states of central Greece behind him, Philip prepared to invade Persia, further expanding Macedonian power. Unfortunately, he was assassinated by one of his seven bodyguards while attending the wedding of his daughter. It is likely that the assassination was planned and instigated by his disaffected wife, Olympias.

Renowned for his strategic and tactical genius, Philip II rebuilt Macedonia’s military from the ground up, shaping it into the fighting force that would go on to win victories across the ancient world, under him and his son, Alexander.

He instituted a series of revolutionary military reforms that gave his army unparalleled tactical flexibility and strategic mobility. Regarded as one of the earliest examples of combined arms warfare, the Macedonian army was a mixture of highly specialised units that worked together to exploit enemy weaknesses and capitalise on their vulnerabilities.

The two linchpins of Philip’s reformed army were the Hetairoi or Companion Cavalry, and the Pezhetairoi or Foot Companions – the Macedonian Phalangite. 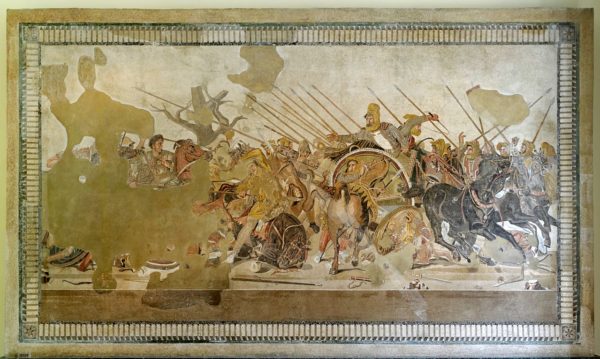 A mosaic showing the Companion Cavalry in action. 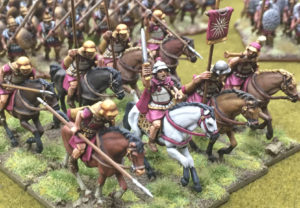 The Companion Cavalry are widely regarded as being the ancient world’s first shock cavalry, able to break whole formations with the weight of their charge. They fought with double-ended lances and swords, utilising a wedge formation to improve their mobility. The Companion Cavalry were primarily launched against weaknesses in the enemy battle line, opening a breach that could be exploited by supporting infantry.

Alternatively, they could use their superior mobility to attack an enemy formation in the flank or rear, while a friendly infantry unit pinned them in place. 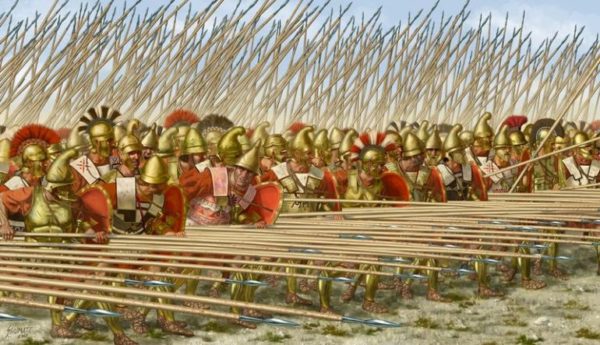 The phalangites of the Foot Companions fought with a 6 metre pike, almost double the length of the spears used by their hoplite contemporaries. Wielded with two hands, these pikes afforded a phalanx with greater reach and they could be thrust with greater force. The phalanx presented its opponents with a thick hedge of razor-sharp steel, almost impervious to frontal assault. However, the formation’s flanks and rear were incredibly vulnerable due to the unwieldy nature of the pike.

When combined with the wide array of mercenaries, irregular infantry and light cavalry, the Macedonian army had exceptional offensive might in the form of the Companion Cavalry, while the phalanx gave it a solid, unwavering battle line.

The Macedonian Army in Hail Caesar

The Macedonian Army is one of immense variety, with a huge range of options for infantry, cavalry and artillery. Grab a core of rock-hard Companion Cavalry and tenacious phalangites and then fill in the gaps with mercenary hoplites, nimble light cavalry and darting skirmishers.

The rules for pikes and phalanx make phalangites almost impervious to frontal cavalry charges and can make life very difficult for attacking infantry, since they can force a draw, despite taking more casualties than their opponent.

Heavy cavalry in Hail Caesar are universally tough and reliable, perfect for hammer and anvil type tactics when combined with your excellent pike formations.

If you’re spoiling to conquer half the known world, we’ve put together an excellent set that will give you a similar army of Macedonians to that which Phillip II used. 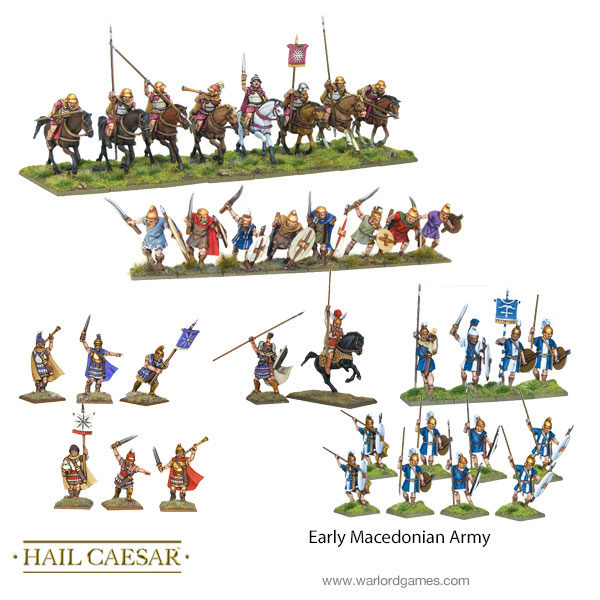 Tom spends most of his time buying books and painting miniatures. He enjoys putting animals on the bases of his miniatures and half-finishing side projects. Some say that he lives in a tower on top of some windswept northern hill with his wife and cow-patterned cat, Spaghetti.
View Profile | View all posts by Tom Mecredy
Aircraft Profile: P-51 Mustang
Frontline Report: 90. Leichte Afrika Division