In this Aircraft Profile series, we’ll be looking at each of the aircraft released for Blood Red Skies, their history and their abilities in your games, continuing with the North American Aviation P-51 Mustang

The introduction of the P-51 Mustang could be said to have changed the aspect of the air war in 1944. The P-51 Mustang would become the icon of air superiority toward the end of World War II, it was however first flown operationally by the RAF as a tactical-reconnaissance aircraft and fighter-bomber – the Mustang Mk I. 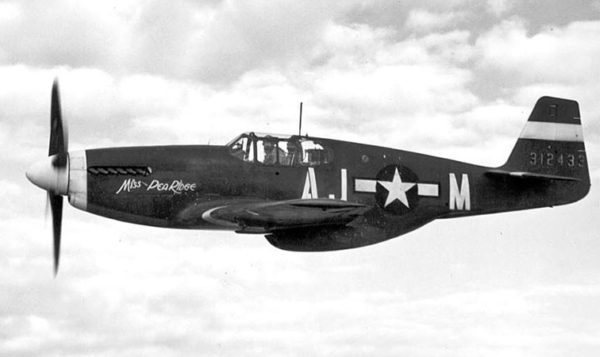 Early on the original Allison V-1710 engine proved limited in power so was replaced by the equally iconic Rolls-Royce Merlin engine creating the Mustang Mk III (P-51B/C). This transformation in the Mustang’s performance above 15,000 ft and allowed it to match up against the Luftwaffe’s Bf109G and FW190 fighters.

From late 1943, P-51Bs and Cs were also in use by the USAAF’s Eighth Air Force to escort bombers in raids over Germany, while the RAF’s Second Tactical Air Force and the USAAF’s Ninth Air Force used the Merlin-powered Mustangs as fighter-bombers

The definitive version, the P-51D, began to arrive in numbers during the summer of 1944. Powered by the Packard V-1650-7 (a license-built version of the Rolls-Royce Merlin 66 two-stage two-speed supercharged engine) and armed with six .50 calibre M2/AN Browning machine guns. Its massive range allowed it to complete the full 1100-mile distance of an average bomber raid, the first time the big heavies had friends for the whole round trip. 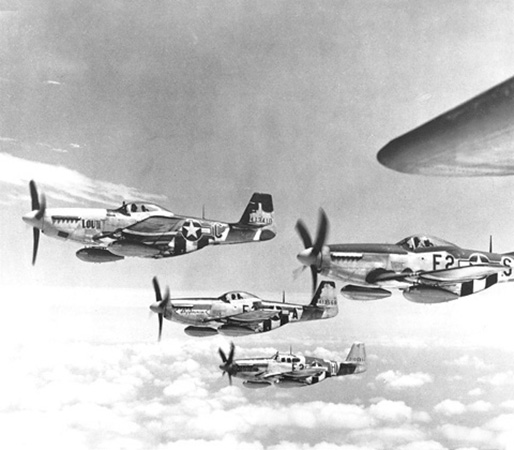 The P-51 was the perfect design for long-range close-support and escort missions. Bomber escort defences were layered by using the shorter-range P-38s and P-47s to escort the bombers during the initial stages of the raid. These shorter ranged fighters would then hand over to the P-51s to continue the much-needed continuous cover required during a raid deep into Germany.

The Mustang’s design was proving superior to the earlier US aircraft designs, so much so in fact that the 8th Air Force began to steadily switch its fighter groups to the Mustang, first swapping arriving P-47 groups to the 9th Air Force in exchange for those that were using P-51s, then gradually converting its Thunderbolt and Lightning groups. By the end of 1944, 14 of its 15 groups flew the Mustang. 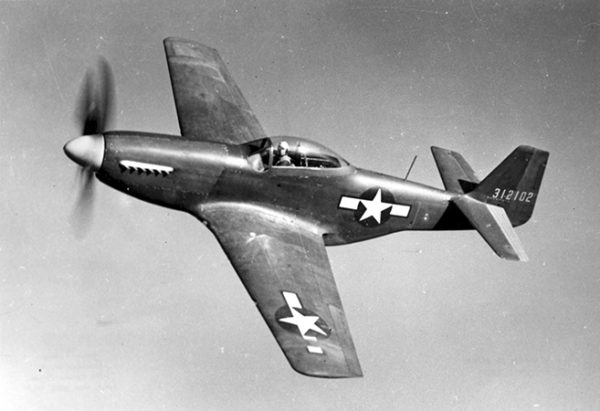 The Mustang was a capable dogfighter platform easily comparable to the Luftwaffe’s Bf109G and FW190 fighters, able to do what they could but better, and far outclassed anything that had come previously. On January 11, 1944, Major James Howard single-handedly attacked a group of Me 110 shooting down 5.

Walter Wolfrum, a Luftwaffe ace with 137 victories, remembered of his encounters with American fighters
“the P-47 wasn’t so bad because we could out turn and outclimb it, initially. The P-51 was something else. It could do everything we could do and do it much better. First off, it was hard to recognize. Unless you saw it from the side, it looked like a Me 109. This caused us trouble from the outset. We would see them, think they were ours and then the damned things would shoot us full of holes. We didn’t like them at all! “. 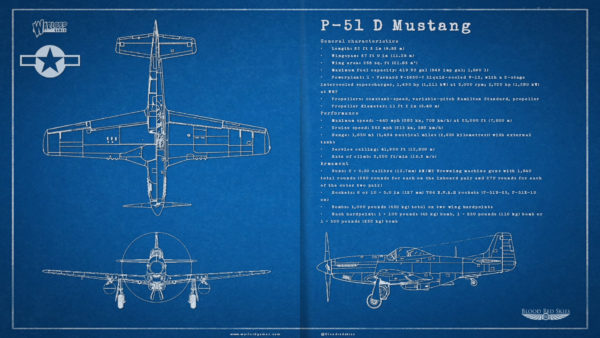 The first P-51s were deployed in the Far East late in 1944, operating in close-support and escort missions, as well as tactical photo reconnaissance. As the war in Europe drew to a close the P-51 started to be deployed in greater numbers in the Pacific Theatre. Up till then, the P-38’s twin-engine design was considered a safety advantage for long, over-water flights. With the capture of Iwo Jima, the Mustang was able to be used as a bomber escort for the Boeing B-29 Superfortress missions against the Japanese homeland. 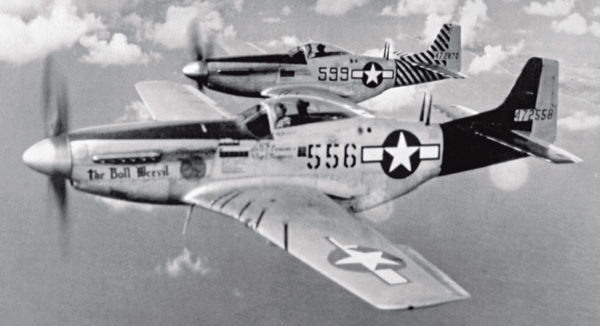 The P-51 was also used by Allied air forces in the North African, Mediterranean, Italian and Pacific theatres.

In early 1945, P-51C, D, and K variants were flown by the 3rd, 4th, and 5th Fighter Groups of the Chinese Nationalist Air Force fighting the Japanese in China.

Be confident as you enter air combat in the sleek and capable Mustang! Use tactics such as Great Dive, Deep Pockets, and High Altitude Performance to potentially devastating effect!

In the attack, pilots in the P-51 will find a tactical deck with good combinations… High Altitude Performance gives you a +2 bonus when Great Dive for an aggressive pilot is ideal for catching the enemy quickly. When you burn advantage to dive you’ll add your maximum move instead of the usual 6″.
Deep Pockets might be considered a defensive option but take advantage of it to press an attack early on in with a head to head pass, secure in the knowledge your squadron has the ammunition and fuel to outlast your opponent.

In defence, Deep Pockets as mentioned allows a P-51 pilot to stay in the fight longer by ignoring a boom chit received by his squadron, the extra fuel and ammunition reserves increasing his endurance. Great Dive also allows you to neatly escape any trap laid by your cunning opponent!

A bonus in this set is the Overshoot ACE card. It’s always advantageous to get behind your enemy, but what if they’re behind you? Well, this ACE card allows your ace pilot to do a “Top Gun”, slowing right down to as little as a quarter of their speed and forcing your opponent to overshoot, turning the tables in an instant! 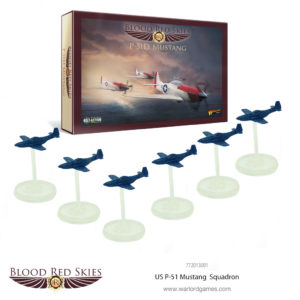 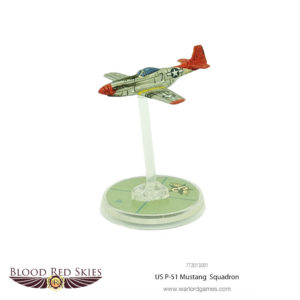 By taking a P-51 Mustang Squadron you’ll instantly have an edge over most enemy aircraft you face, Total air superiority!

The American P-51 Mustang comes in a Squadron pack with:

Start your aerial campaign with the Blood Red Skies USAAF. This offer gives you the American ACE George Preddy, 1 squadron of 6 P-51 Mustangs (with all the counters, advantage flying bases, models and cards needed to field these advance, agile fighting machines) plus 10 dice! 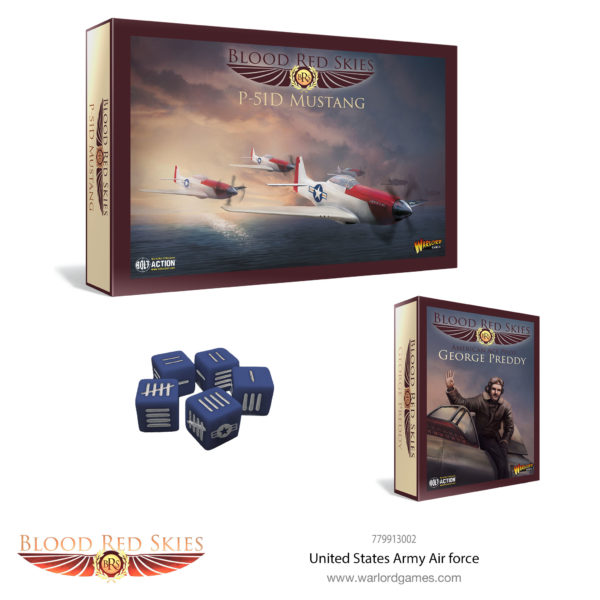