Wow, we’ve had such a great response from everyone at Salute and online so we’ve asked Author Gabrio to put together this FAQ to answer some of the burning questions about Black Seas…

What scale is it?

The game has been designed to work at its best in a scale between 1:600 and 1:800. We have gone for 1:700 as at this scale we can obtain a significant amount of detail on the models whilst still retaining the capability of deploying big fleets. It also allowed us to focus the starter set on frigate and brig action (in plastic too!).

Gabrio Tolentino. Originally heavily involved in the Games Workshop Ancient Battles rules set “Trafalgar” he was one of the co-authors to John Stallard in Cruel Seas together with Richard Carlisle. With more than 25 years experience within the miniatures market and a passion for the age of sail, he has devised a fast and simple system with enough flavour and themed rules thrown in to make it a fantastic rules system.

Does it share the same system as Cruel Seas?

There are a few key mechanics that are quite similar, the main ones being the wakes system of tracking the speed and elements of the movement in general; the “to hit” system; the criticals and how to track damage. However, there are quite a few significant differences and many refinements: like a new order of play mechanics, the introduction of the wind and its significant but streamlined effect on movement, how to deal damage and lots of period-specific additions.

Will the miniatures be plastic?

Yes. with the range now finalised to have plastic Frigates, Brigs and 3rd rates, with customisation options on the frame. Whilst the remaining ships will be highly detailed resin with metal optional components.

What is the release date?

Will there be a new range of miniatures to accompany this?

Absolutely! From 1st rate Ships to gunboats we will eventually cover all basis. We are also planning to make some interesting terrain features.

Will it link into Black Powder?

Yes, in the same way Cruel Seas links to Bolt Action, as in it is the perfect link for campaign games in which the outcome of the sea battles provides advantages or similar to a Black Powder game. 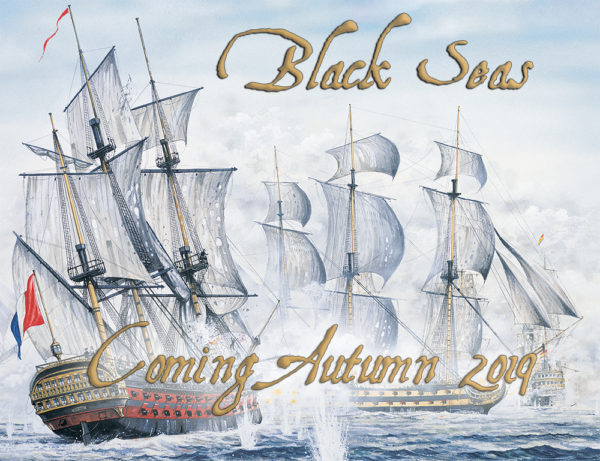 Tom spends most of his time buying books and painting miniatures. He enjoys putting animals on the bases of his miniatures and half-finishing side projects. Some say that he lives in a tower on top of some windswept northern hill with his wife and cow-patterned cat, Spaghetti.
View Profile | View all posts by Tom Mecredy
Korean War: Chinese Infantry
Black Seas – Designer Notes, by Gabrio Tolentino