Beyond the Gates of Antares, Concord, Focus, Freeborn, Isorian Shard

Focus: The NuHu with Tim Bancroft

Learn more about the NuHu as Tim Bancroft meticulously picks them apart to describe their inner workings!

The advanced humans known as NuHu are directly linked to the nanosphere (p.127 Beyond the Gates Of Antares). They have evolved so that they are an integral part of the IMTel environment, part of it and an expression of it. As such, they are difficult for the ordinary Antarean and PanHuman to understand.

On the tabletop, the NuHu have a particular set of rules that also makes them difficult to understand, so it’s worth examining as a separate type of unit. The key components of the NuHu are on p.67 (IMTel stave), p.113 (the nano drone) and p.127-128 for information on the NuHu and the Freeborn Renegade Meld themselves.

Note: Midway through writing this a series of questions were asked on the Facebook page. The answers to those questions are included in this article (dubbed the ‘NuHu User’s Guide’ by Rick Priestley.) 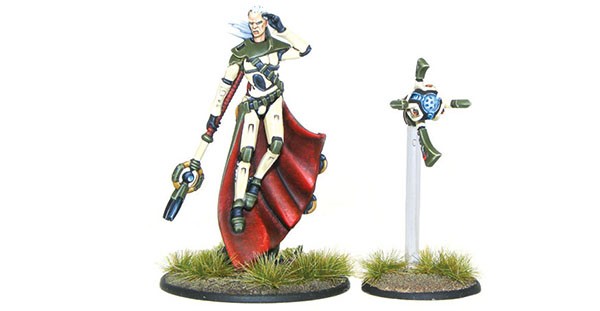 Each major advanced civilisation, the PanHuman Concord, Isorian Senatex and the Freeborn Vardos, support the existence of NuHu. The stats for each are roughly the same (page 127 in the Antares rulebook) but the Freeborn also have the additional Renegade Meld (p.128) – a merge of two NuHu into a single entity. 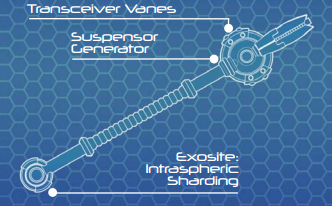 ‘3 Attacks’ in the stave’s ‘Special’ entry means three single attacks only in hand to hand combat. When shooting, the stave does a single shot, at SV3 when in Standard mode, SV6 and Blast D3 when in Boosted mode. It can only be boosted by an active nano drone with the unit.

The stave’s attack can be boosted by the presence of a nano-drone. It’s worth noting that when the stave rolls a 10 on a hit, it is the stave that is temporarily exhausted and not the nano drone. This is important to note for NuHu Meld units as one of the staves in the unit could be drained whilst the other remains empowered.

To recover from exhaustion, a stave rolls a D10 in the End Phase. On a roll of 6-10 the stave is replenished. Given that NuHu carry plasma pistols, if a stave remains drained then the NuHu can still defend itself with its plasma pistol. However, as with any multi-weapon individual, the NuHu has to choose between using the pistol or the stave. Given the NuHu’s pistol has a longer range than the stave, this is sometimes its only option.

This is a boost from the nano drone that increases the effectiveness of a NuHu’s IMTel stave and is purely optional. The boost is to SV 6 from the staves normal SV 3 and makes the shooting attack into Blast D3 at SV 6 rather a single SV3 attack. It also boosts the stave’s range to 20″ rather than the normal 10″.

A Renegade Meld is a single entity so its single nano drone can boost both NuHu’s staves.

A twist here is that either, neither or both staves in a Meld can receive a nano boost. A tactic from this is to use one of the pair in the Meld unboosted and the other boosted so if the boosted stave becomes exhausted (on the roll of a 10 to hit) the NuHu can switch roles. Of course, there is nothing stopping you going all out and boosting both NuHu for a really powerful pair of attacks.

The nano drone envelopes its master in a boosted hyperlight armour – the drone itself is able to absorb the sink mass generated as a consequence.

Though most NuHu have a Res of 4, the nano drone gives it a hyperlight bonus equivalent to hyperlight armour plus a hyperlight booster.This is a bonus so for a Renegade Meld with a base Res of 8, the NuHu’s Res is potentially boosted into the heavily armoured territory without cover bonuses.

This boosts its Res from its base value of 4 or 8 to:

Note that this is the same kind of shield as a batter shield projected by a batter drone, and the Acc penalties from the two cannot be combined Unlike a normal batter shield, this -2 penalty for shooting through the NuHu’s kinetic shield applies to any direction..

It is worth noting that this benefit is something that almost everyone I know forgets sometime during the game, probably because there is no template for it. It means it’s worth writing the benefit down somewhere where it’s obvious.

If the nano drone is destroyed though, this kinetic shield is gone. The -2 effect does not stack with batter shields as the kinetic shield is an identical barrier: even if shooters shoot through another batter shield to target the NuHu, the reduction to Acc is still only -2 from shields (though other penalties apply).

A nano drone is a special kind of buddy drone keyed to the brain patterns of an individual NuHu.

As mentioned above, it is the nano drone that gives a NuHu a localised kinetic (batter) shield (-2 to hit the NuHu), an additional hyperlight armour boost with HL booster (+2/+3/+4 to Res) and the nano-boost to the IMTel stave.

Whilst the Freeborn Army List entry allows for the purchase of a second nano drone as a backup, the single nano drone protects both NuHu and can power both staves: each are, in effect, a single entity.

Whilst I normally minimise my opinion (try to have none) in these articles, it is important to note that the Nano Drone is vital to a NuHu’s tabletop effectiveness. This means it is worth protecting with extra shield drones as it is frequently the first drone to be targeted by lucky hits (attack rolls of 1 on the dice) and disruptor hits. 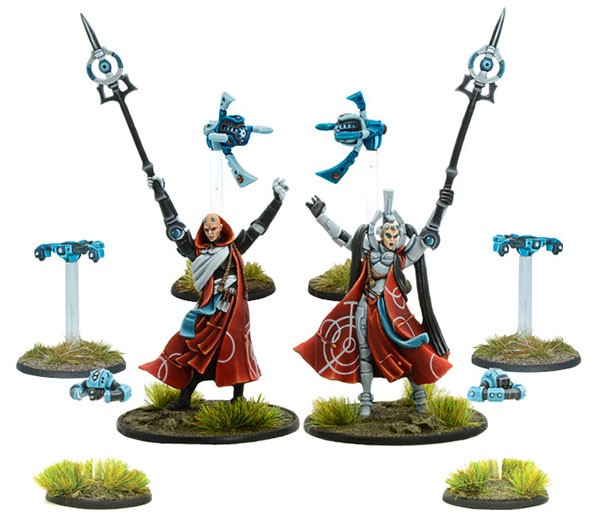 The NuHu Renegage Meld is different from not only the other NuHu but also from other units as it is not just a unit of two discrete individuals, each of which takes damage, but a MOD entity that takes damage on the Meld Damage Chart as a whole. Individual NuHu models are not removed unless instructed on the damage chart. Even if a MOD dice is removed, the unit continues rolling on the Meld Damage Chart and does so until the meld is broken (a result of a 9 on the chart).

This reduction to a single-dice unit can happen to the Meld by a damage chart result of 4-8. However, even when down to one dice, it still acts as a single entity of two models rather than a unit of two individuals. Only when a NuHu is removed by that Damage Chart ‘9’ result does it revert to normal NuHu Renegade stats (p.191).

The Meld normally has has 2 Order dice and each NuHu is armed with a stave. Just like other MOD units, in each activiation, both NuHu can shoot. In Assaults, both NuHu can shoot in PBS and both can fight in H2H – both times using their personal stave.

An interesting twist is that the NuHu need not both use their nano-boost. One can shoot or use a boosted stave in H2H whilst the other can just use their stave non-boosted (see above).

The key here is that you need not purchase a second nano drone as the nano drone already with the unit can power both. They two NuHu in the Meld are, as p.128 says, a single entity and the nano drone is attuned to them, as a pair and, if part of the entity dies, to the surviving part.

Units of One or Two 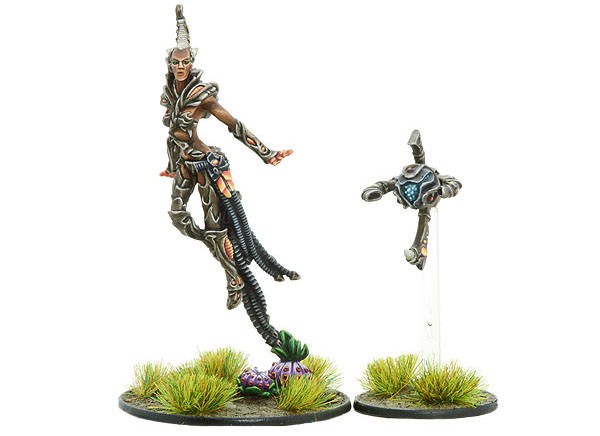 There is a section under ‘Break Tests’ on page 45 that specifically address units consisting only of one or two figures at the start of the game. It points out that they could only be broken by an auto-break or when failing a Break test on a roll of 10 but on a fail will always go Down.

This doesn’t only apply to NuHu but to small weapons teams and Ghar bombers. It’s not an alteration in the rule but an explanation of losses: a NuHu unit will still break if losing or drawing a round of hand-to-hand by having more pins on them than its opponent and will still break on a 10 or if pinned out (having pins equal to or more than its Co stat).

Hope this helps! As ever, thanks to Rick Priestley. 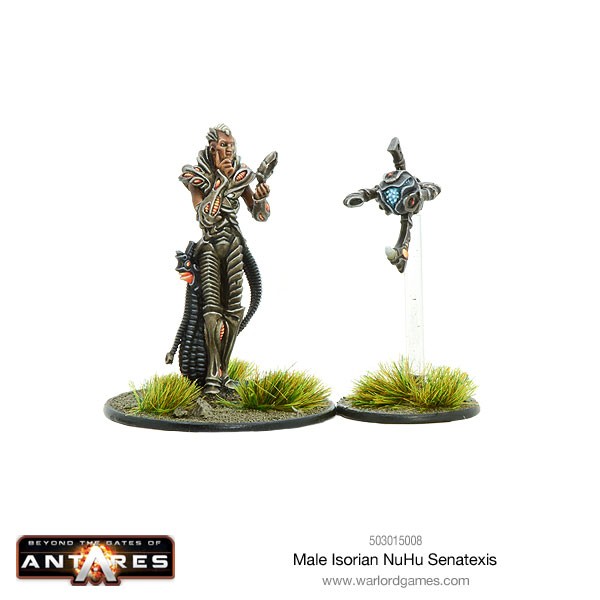 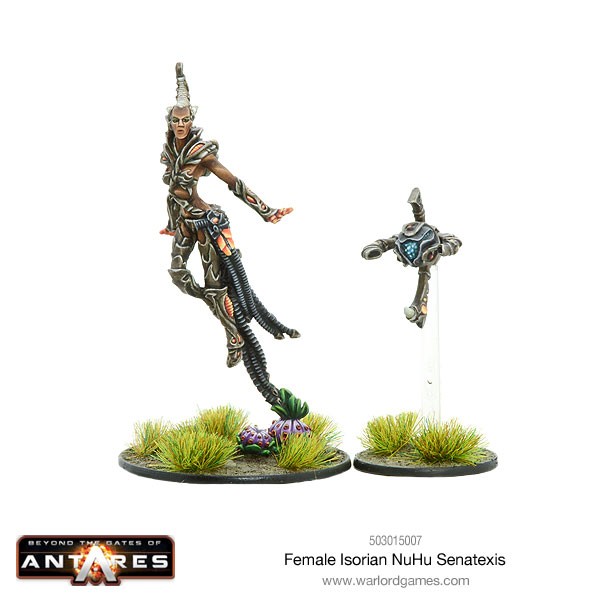 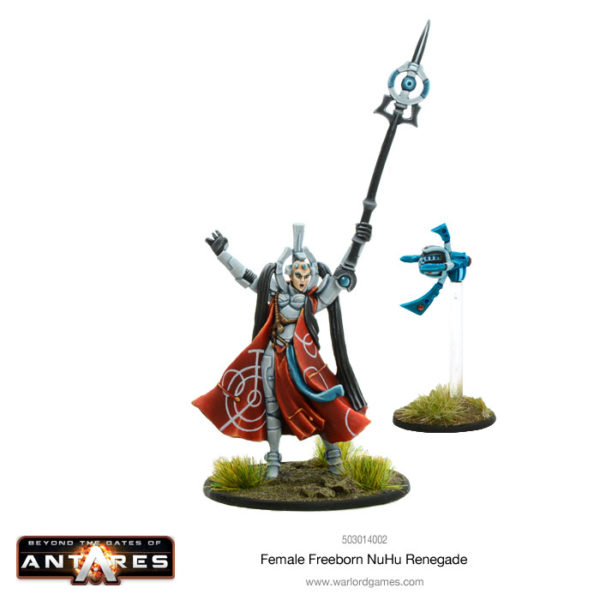 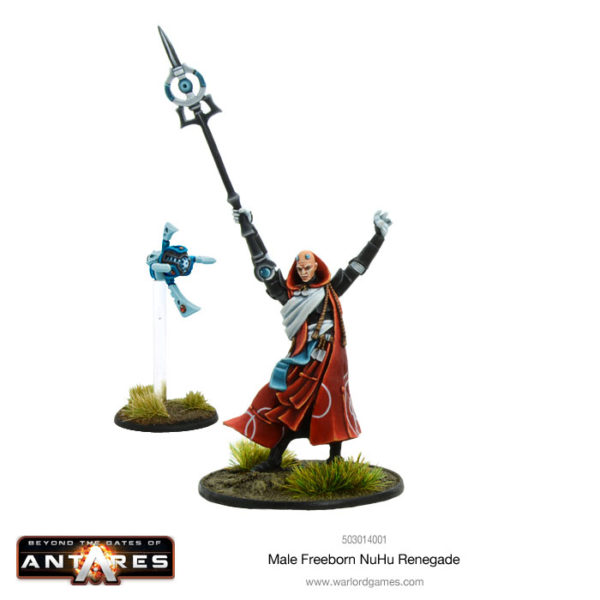 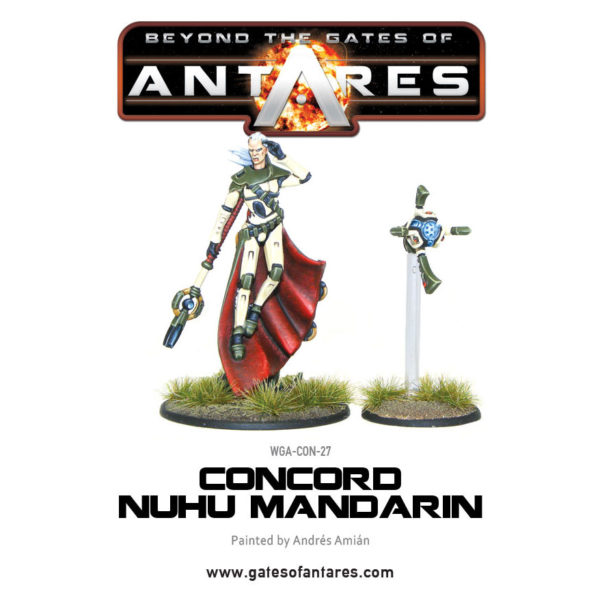 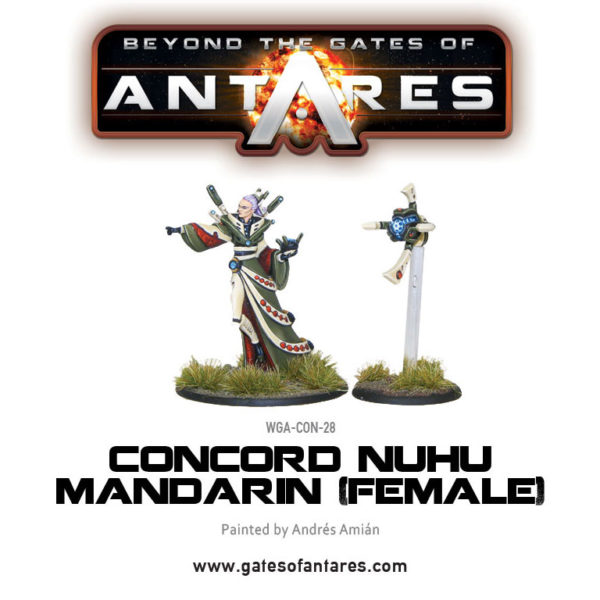 Beyond the Gates of Antares594 Concord88 Focus3 Freeborn70 NuHu2