We’re taking a look at boarding enemy ships in Black Seas, an invaluable technique for securing the contents of a hold, or the ship itself as a prize.

There were two chief techniques of boarding in the Age of Sail. The first, and one most pertinent to Black Seas was to bring two ships close enough that a crewman could actually step or leap from one’s own gunwale to an enemy’s deck. This could be achieved with the assistance of grappling hooks and lines to secure the two ships’ relative positions.

The second option was to have a boarding party on a small boat, row them alongside a larger ship and have them clamber up grappling hooks or footholds embedded into the ship’s outer hull. A variation of this technique is a cutting out boarding. This tactic relied on both stealth and surprise so was often employed at night. These techniques were popularised and extensively used during the Napoleonic Wars and would heavily inform future naval boarding tactics. 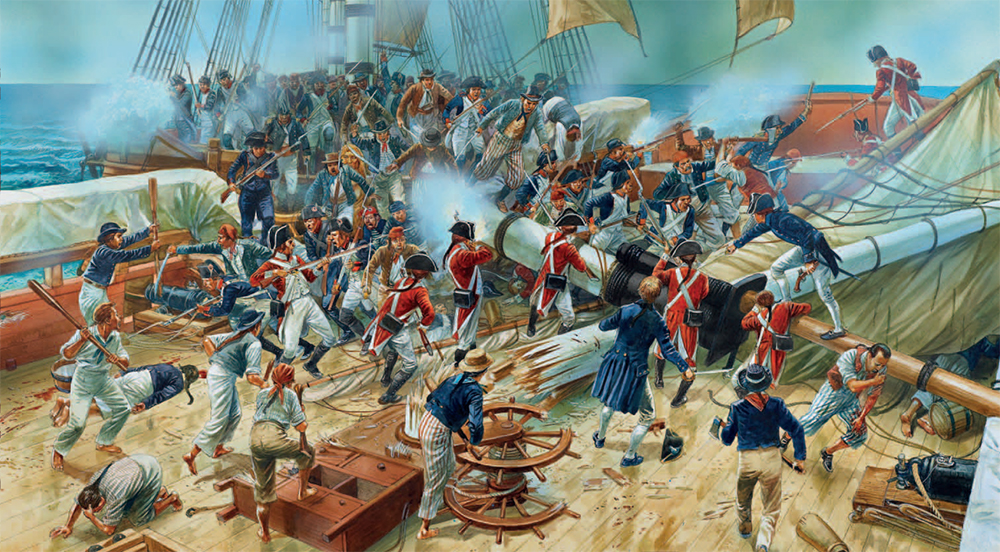 Boarding in the Age of Sail proved more dangerous than history had previously demonstrated. Boarders were now tremendously exposed in comparison to their forebears. Aggressors and defenders were subject to such ranged weaponry as grenades, pistols, blunderbusses and muskets. Until the early 19th century, sailors preferred to use flintlock rather than matchlock, for fear that a lighted match posed a danger to a vessel.

For extreme close-quarters engagements, they may have used cutlasses, bayonets, boarding axes or pikes – the latter used as a defensive weapon to keep boarders at a preferable distance. Boarding axes were often essential, not solely used in a melee but used to dislodge grappling lines and break down doors and barricades where a foe might have secured themselves.

There is only one recorded case in history of a ship’s captain successfully capturing an enemy vessel whilst losing his own. This was John Paul Jones’ capture of HMS Serapis at the Battle of Flamborough Head in 1779. His assault was launched from the sinking USS Bonhomme Richard – quite the reversal in fortune.

Provided that a vessel and its target are both travelling at no greater speed than Battle Sails and that they are no further than 3″ apart, then a boarding action is possible. A skill test is required; if passed both ships become stationary and grappled. Grappled ships are unable to fire, as the preoccupation of their crews with the imposing boarding diverts their attention entirely. 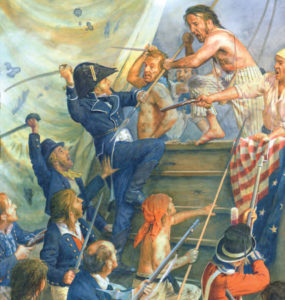 When a grappled ship activates, battle rages. Remember that a ship’s points value is indicative of both the ship itself and its crew, so a percentage of this value (representative of strength) is used to determine the number of dice for the boarding action attack. A successful roll will inflict two points of damage to the enemy ship (4 for a critical). Should the loser of a round of fighting now be at less than 50% of its initial ship points, it will need to pass a skill test in order to prevent a surrender – though if the ship is below its break value, this test automatically fails.

Though grappled ships are unable to fire on one another, this does not render them safe from other vessels. Any damage from other ships firing is applied to both (or all) grappled vessels. The only recourse for a grappled ship is to fight back or attempt to disengage – the latter requires a skill test, though if successful the ship can only move at light sails and will be unable to fire as the crew scramble back to their positions.

There are a number of different ways a fleet admiral can be prepared for the possibility of a boarding action in a game, whether they be the initiator or defender.

A particularly wily captain wishing to board an enemy vessel will have preloaded their broadside guns with grapeshot, which, whilst severely limited in range, can be extremely devastating and provides a bonus to the initial boarding action in a turn.

A number of upgrades exist to assist in your boarding actions. The grappling hooks and privateer upgrades boost your ability to initiate a grapple, whilst grenades and trained marines give bonuses to hit during boarding actions. A vessel can also be equipped with swivel guns to inflict bonus damage prior to the first round of a boarding action and/or a ship’s surgeon to prevent damage inflicted in the close-quarters melee.

If you’re particularly keen not to be boarded and keep the enemy at bay, the boarding nets upgrade makes grappling your ship more difficult, for a relatively inexpensive price.

Another interesting, and unorthodox, use of the boarding party supposedly occurred in 1806, off the coast of Madagascar. Captaining a captured Privateer french vessel, the Bon Fortune, John Myers encountered La Brave, a vessel with a reputation for capturing smaller ships by weight of numbers. Myers’ solution was to lower the ship’s only boat into the water prior to the action, loaded with small arms and hide his men.

The crew of La Brave piled onto the Bon Fortune, but as the ships drifted apart, Myers’ crew piled into the boat and rowed furiously over to the larger vessel, overwhelming the four crewmen left behind. Now in control of the larger, more heavily armed ship, Myers forced the surrender of La Brave’s captain. He now commanded two vessels!

If this has whetted your appetite for some high seas action then the ideal starting point is the Master & Commander starter set, netting you 6 brigs and 3 frigates, as well as the full rules and everything needed to play.