We are just a day away from arguably the largest historical wargames show in the USA, as the Fredericksburg Expo & Convention centre once again opens its doors to over 3,000 gamers, modellers and collectors  – Historicon 2016 and the superb limited edition figure are a go!.

Into the Valley of Death.

As in previous years, Warlord Games has produced the exclusive show miniature – based on George MacDonald-Fraser’s scoundrel ‘hero’ Harry Flashman at the Charge of the Light Brigade, Battle of Balaclava 1854.

Suffering from the effects of the heady concoction of fear and the previous evenings over indulgence in champagne, Flash once again finds himself in peril when he is unhorsed at the head of the glorious charge of the Light Brigade at Balaclava. Springing to his feet, our hero whips out his sabre and, er, offers it to his captors as he splutters “Friend! Don’t hurt me!”.

New One Off Special Deal! 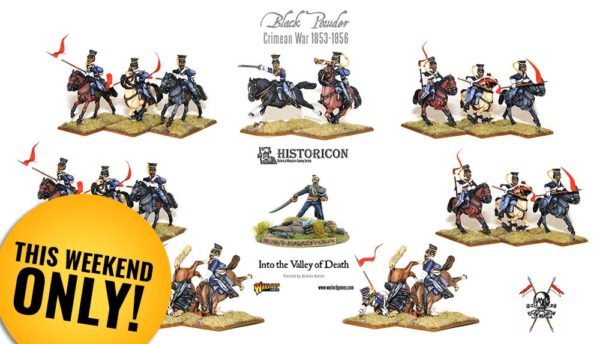 This special edition figure and the 17th Lancer deal will only be available during the Historicon weekend. Those of you lucky enough to make it will be able to pick up your special hero there, but what of the deal and those of you who can’t attend? As with previous years, the event organisers have kindly allowed us to make them available on general sale via our website whilst Historicon is live (July 14th-17th).

This limited figure, and the 17th Lancer Deal with him in it, are strictly on a first come first served basis from the Warlord Games Online Store so be sure to get yours early.

Flying over from Warlord HQ in Nottingham UK on his transatlantic expedition is Andrew Chesney. ‘Ches’, as he’s more commonly known,  will be around to talk about all the new and exciting projects Warlord are working on. He will be sharing his time between the games in the main hall and the retail stand.

Also attending the event from Warlord will be sculptor extraordinaire, Wojtek who will explain how he managed to get all that fine detail into his models…and who knows what else he might squirrel out of the studio to show you folks?

As always, if there is ANYTHING at all product wise that we don’t have on the day we will be happy to send it out FREEPOST when we get back to the office.

So if you want to see gloriously painted miniatures fantastic displays of scenery or just get a snap shot of history, be sure pop on down to Fredericksburg and join in on the excitement!

Exhibitor hours are from Noon – 6 PM on Thursday; 9AM – 6PM on Friday and Saturday; and 9AM – noon on Sunday.
The World’s largest historical miniature convention with 3,000 – 4,000 total attendees, offering a large exhibitor hall to accommodate more exhibitors – see you there!