We were contacted recently by Chris Goddard – a member of the Beasts of War community, and avid historical wargamer – about a project that’s due to launch next weekend, and it rather got our juices going… 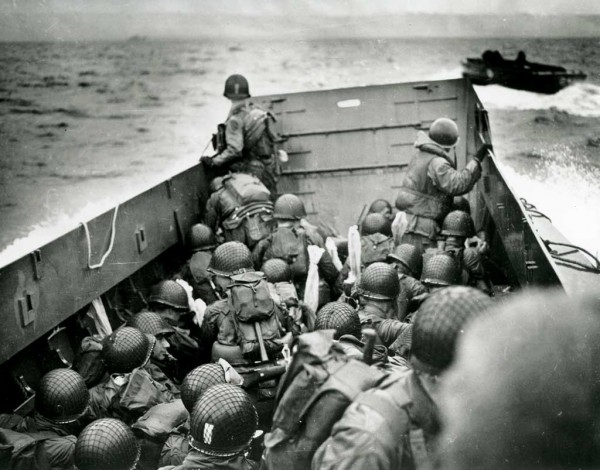 About two months ago a discussion ignited among some of the more historically-minded forum members of the Beasts of War website, beginning with the contributions and sacrifices of men and women of the various armed services of our international community. This soon coalesced into the courage of the men participating in the battles of Normandy in June 1944 (regardless of the uniform they wore), which had clearly struck a chord with many of us. Perhaps just in passing, I made the suggestion that we coordinate a series of commemorative wargames all around the world, each gaming group or club recreating part of that “Longest Day.” Before I knew it, I’d been named chief of what became known as the “Worldwide D-Day Challenge” (WWDDC), a project in which we now invite all you to join.

Put most simply, the WWDDC invites gaming groups all around the world to select a particular engagement, battle, skirmish, assault, or firefight that took place on June 6, 1944. Almost any rules system is acceptable, already we have groups from the United Kingdom, United States, and Continental Europe recreating corners of D-Day in six different systems, including of course, Warlord’s fantastic Bolt Action. All of these games will played on or about June 6, 2015, the results pooled together into one “big picture” result. In effect, we’d be playing one titanic wargame, perhaps one of the biggest in recent memory.

Of course, organizing a dozen gaming groups on both sides of the Atlantic has hardly been easy. Fortunately, I have the assistance of another wargamer almost as crazy as I am. James Johnson is a writer, historian, and former US Marine who’s 30-year wargaming career allows him to help stitch together this Frankenstein’s monster of different systems into a cohesive, engaging, and historically respectful tribute to that pivotal day in June 71 years ago. Another source of invaluable help will be my wargaming wife Victoria, who’s steadily turning our living room into a Normandy war room wall-papered with maps of all the games comprising the project.

I approached Warlord’s Steve Yates with regards to potential support of the WWDDC – and after telling me that I was mad, he wished us well and badgered his boss to take a look at our project (being kind enough to disregard our straightjackets). Now we come to you, wargamers of Bolt Action, asking you to join our cause.

We’re looking for players of Bolt Action who’d be interested in organising a D-Day themed game. To join the project, just please reach out to me (I am @chrisg in the Historical Forums at Beasts of War). You needn’t be the Perry twins, Verlinden or the best model builder in the world. All you need is a passion for Bolt Action and a desire to help commemorate D-Day . . . all while having gaming fun and having your group featured in a series of WWDDC web articles written by the aforementioned James Johnson.

So far, the WWDDC is comprised of the following wargames. The map below shows the location of these games in the context of the historical Normandy landings. 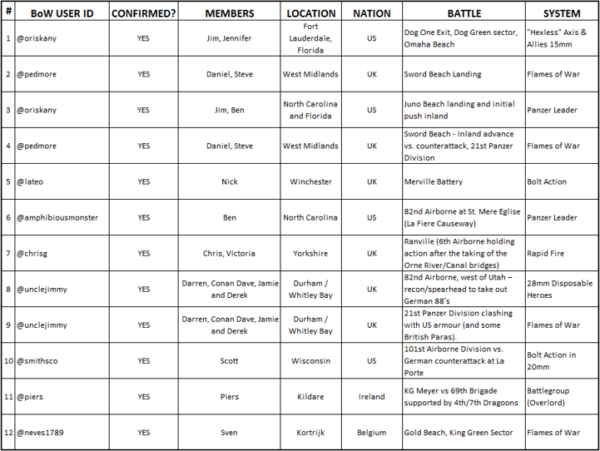 I am certain there are Bolt Action players out there who would want to tackle the challenge of seizing Pegasus Bridge, land with the Screaming Eagles of the 101st, slog up the slaughter of Omaha, or any of the other important actions that made up the incredible first day of Operation Overlord. We hope you will join us in commemorating those who gave their last full measure (again, regardless of uniform or what side they fought for), as well as the thousands of French civilians who fell during the liberation of their homeland.

So again, all you need to do is contact me. You’re in control so let me know what engagement you will be fighting from the D-Day landings.

One final note: many of the players and groups involved with the WWDDC will be making donations to veteran’s support groups in conjunction with their games. Speaking for myself, Victoria and I will be making a small donation to Combat Stress here in the UK, while James will be making a similar donation to the Wounded Warrior Project in the US. By no means are we saying this is a requirement or request of the WWDDC in any way, it’s just something we are doing as former members of the armed forces as part of our D-Day commemoration.

We hope our Worldwide D-Day Challenge has sparked your interest, and we look forward to hearing from you soon!