The Big Wing, also known as a Balbo, was a tactic proposed during the Battle of Britain by 12th Group commander Air Vice-Marshal Trafford Leigh-Mallory and Acting Squadron Leader Douglas Bader. The basic premise was to meet incoming Luftwaffe bombers in strength with between three and five squadrons. Squadrons under Bader’s command employed this tactic, dubbed the Duxford Wing. In its initial deployment, they claimed 11 enemy aircraft for the loss of one fighter.

Though the “Big Wing” did not enjoy many deployments defensively, it sharply demonstrated the mantra of safety in numbers, as aircraft losses diminished significantly when they were deployed in this fashion.

Scramble the “Big Wing” in Blood Red Skies. This bundle gives you 4 squadrons of Supermarine Spitfires, for a total of 24 aircraft. 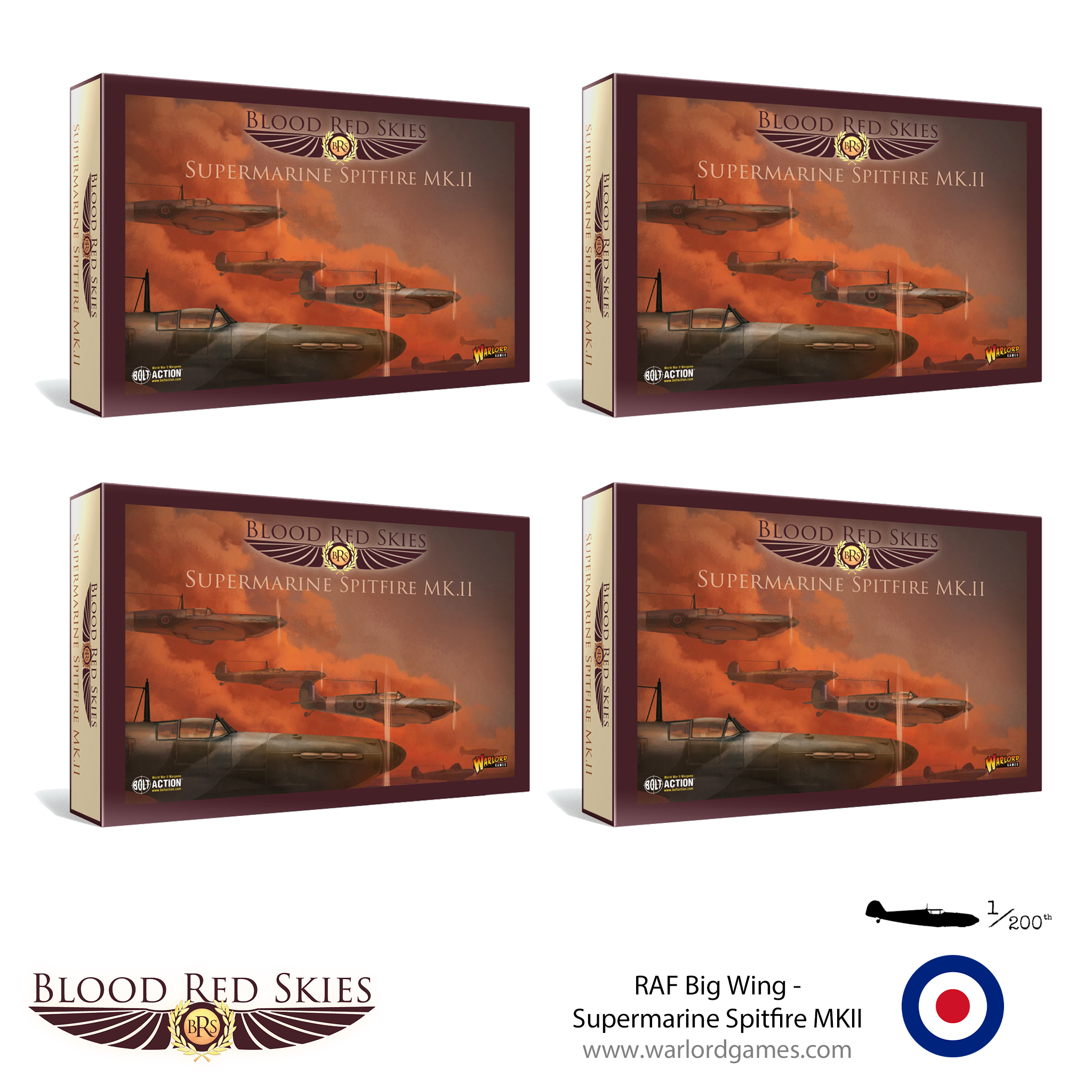 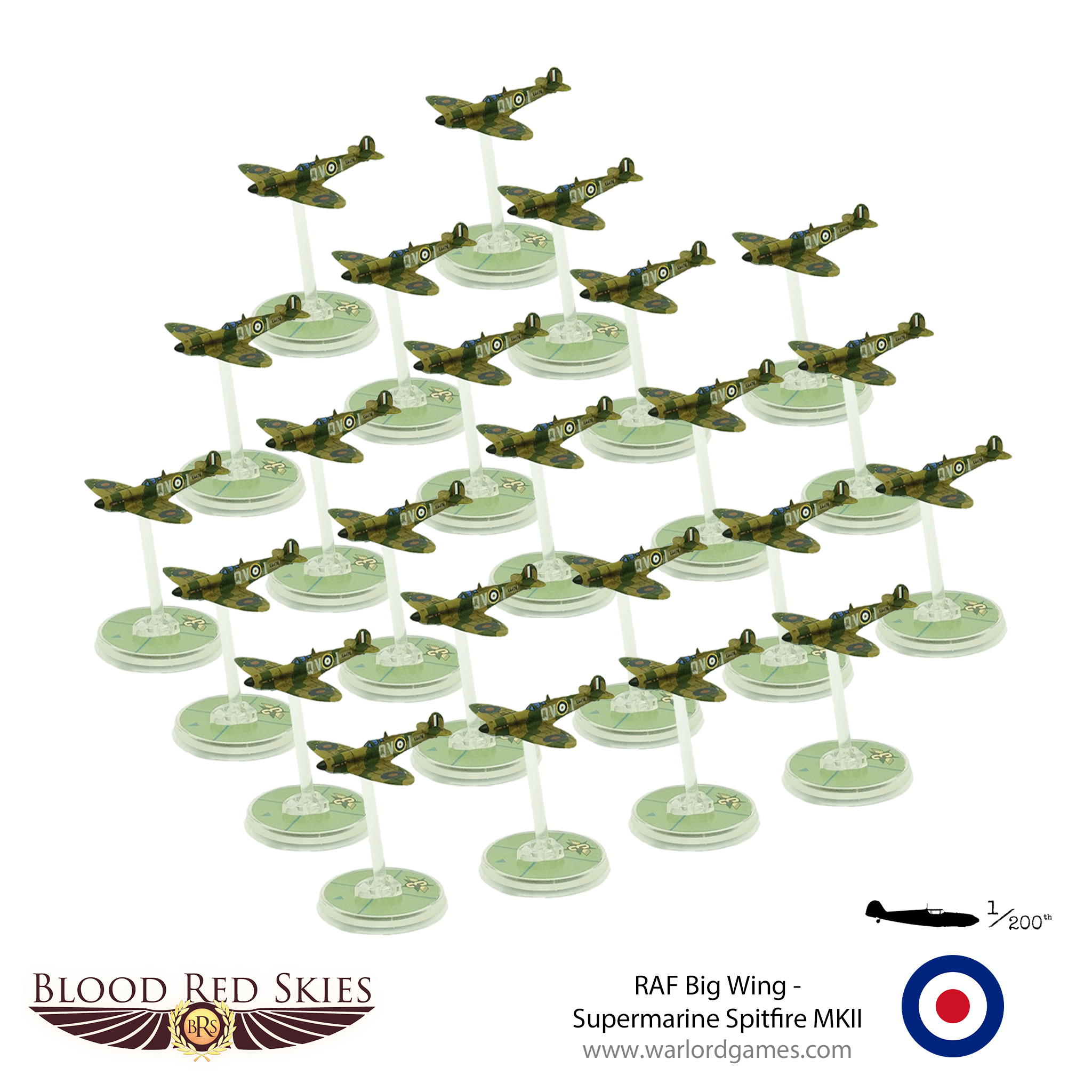 The official Luftwaffe Staffel was divided into three Schwärme (“swarms”) each consisting of between four to six aircraft, though this was subject to evolving tactics during the course of the War. It was not uncommon earlier in the war for Staffel to consist of a much larger number of aircraft.

Our Staffel of Messerschmitt BF-109s contains 24 aircraft, a formidable fighting force for re-enacting the Battle of Britain in Blood Red Skies. 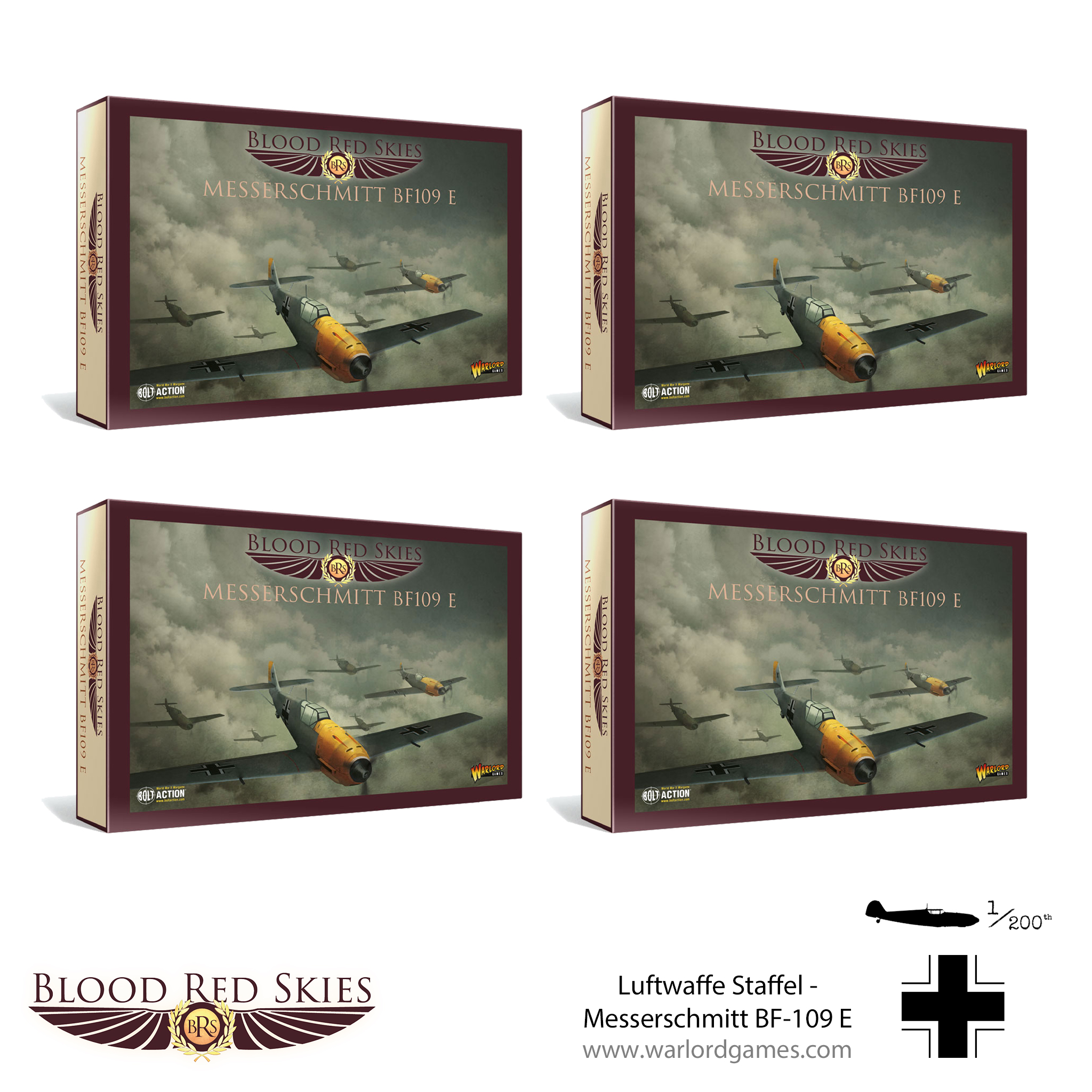 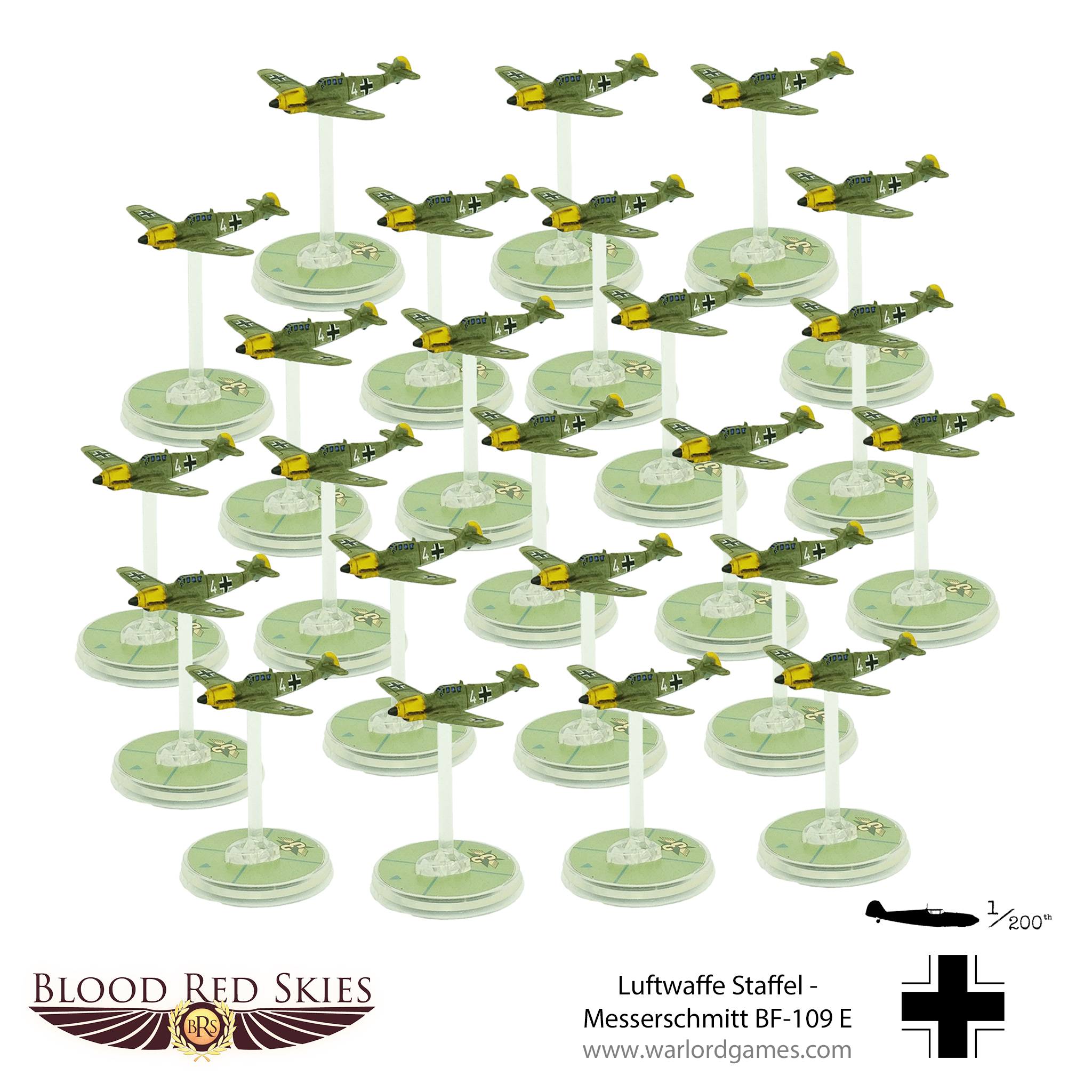 The Yakovlev Yak-1 was an extremely reliable and well-respected aircraft, despite the Axis incursion leading to some quality and production issues as the Great Patriotic War drew on. With an entire Aviatsionniy Polk of Yak 1s at your disposal, you’ll be able to field an appropriately daunting force in Blood Red Skies.

This bundle contains 4 squadrons of Yak 1s for a total of 24 aircraft. Prepare for epic battles over the Eastern Front. 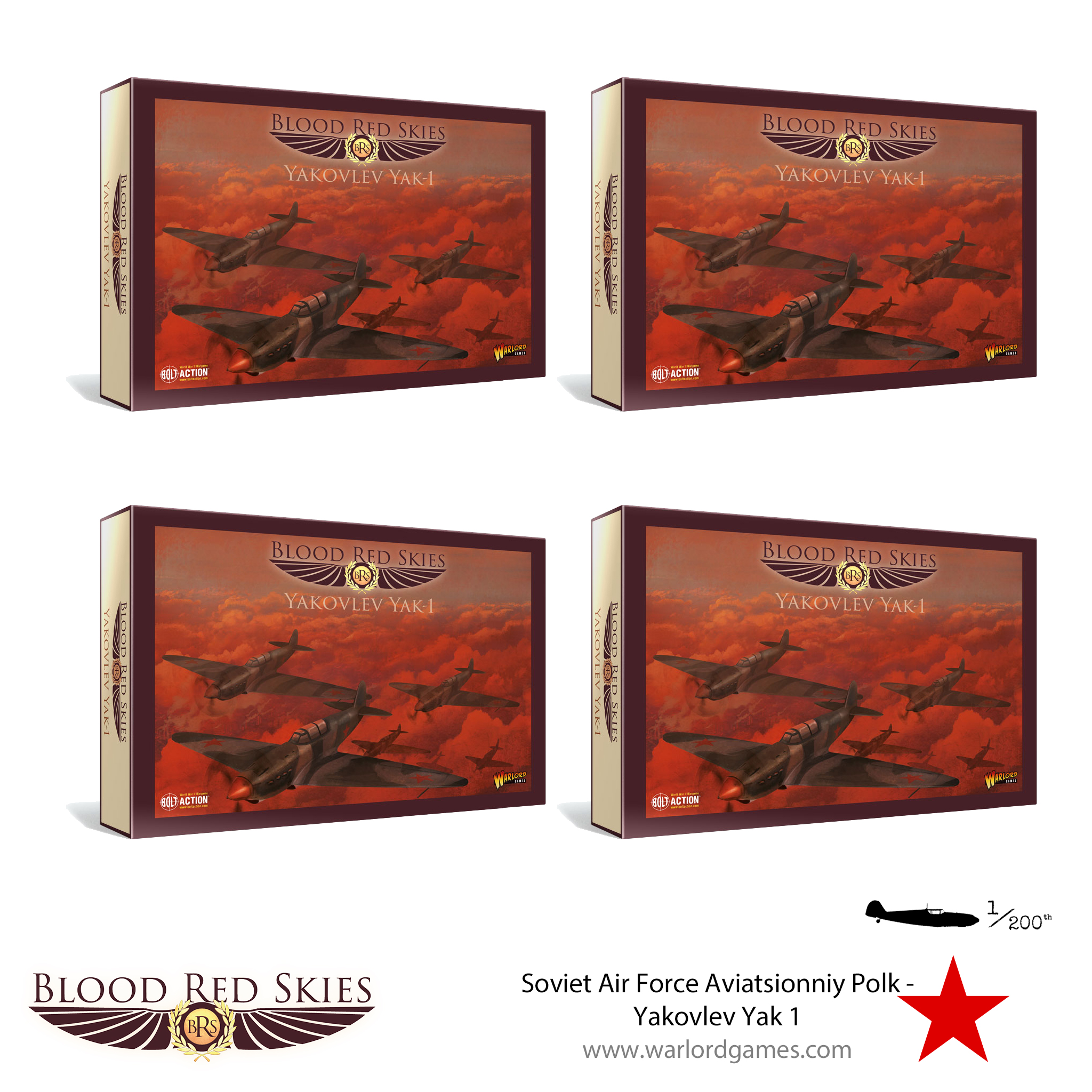 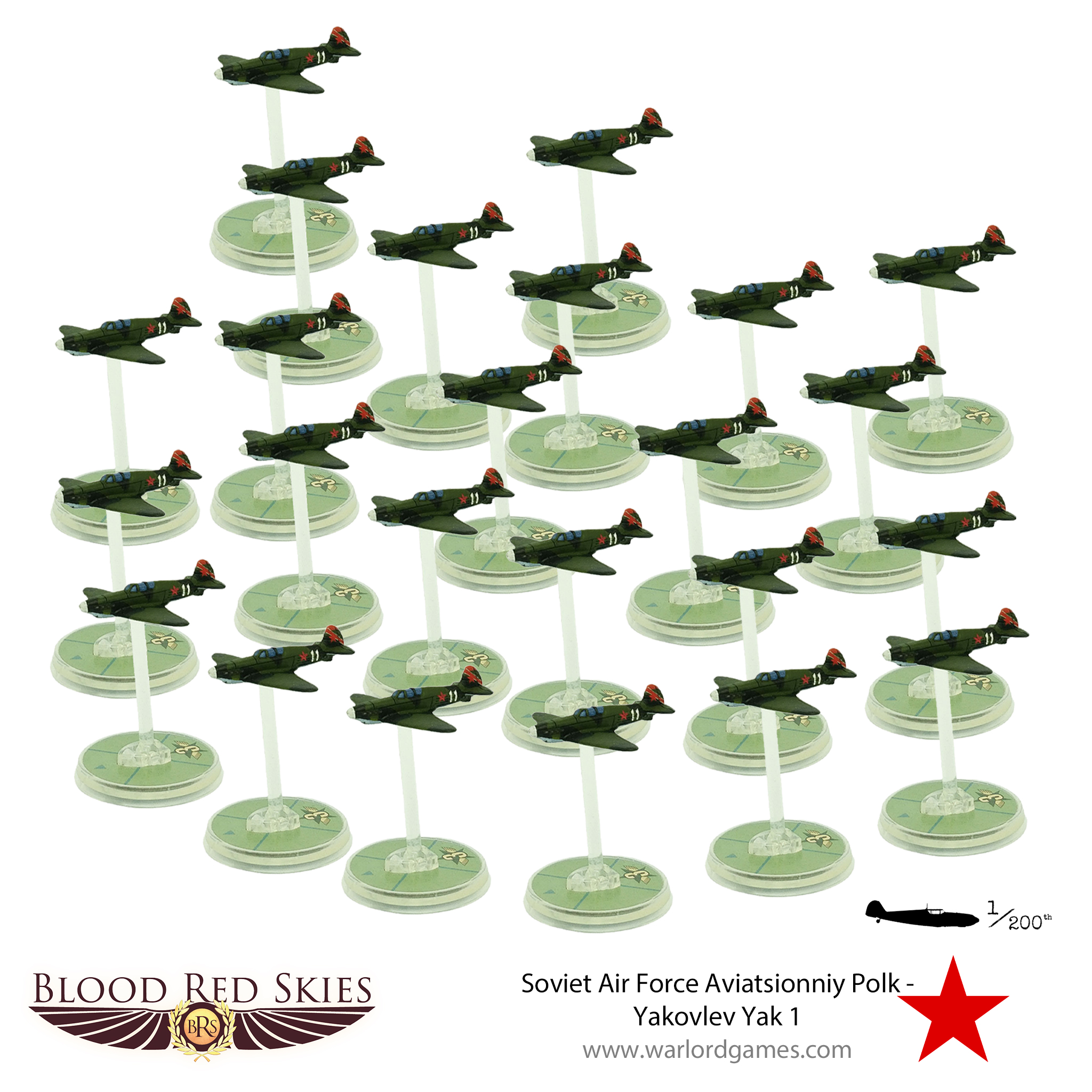 The P-51 achieved enormous success, supplanting the P-47 and P-38 as a most effective bomber escort in the European theatre. Combining their numerical superiority and flying characteristics, the P-51 was an essential cog in the thwarting of the Luftwaffe, resulting in the ability to conduct daylight bombing raids in 1944.

This bundle contains 4 squadrons of P-51 Mustangs for a total of 24 aircraft, a serious obstacle to the Luftwaffe’s flights in Blood Red Skies. 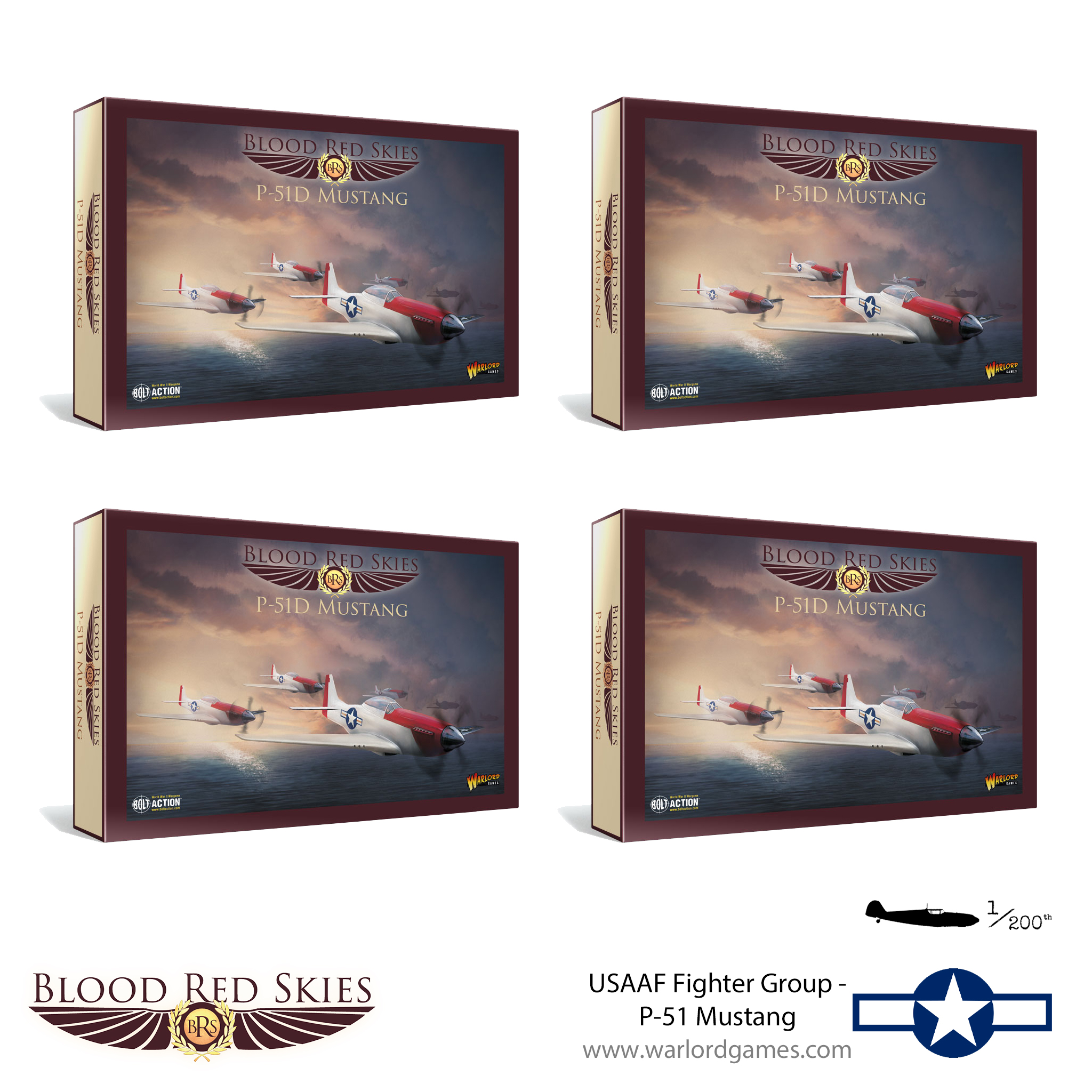 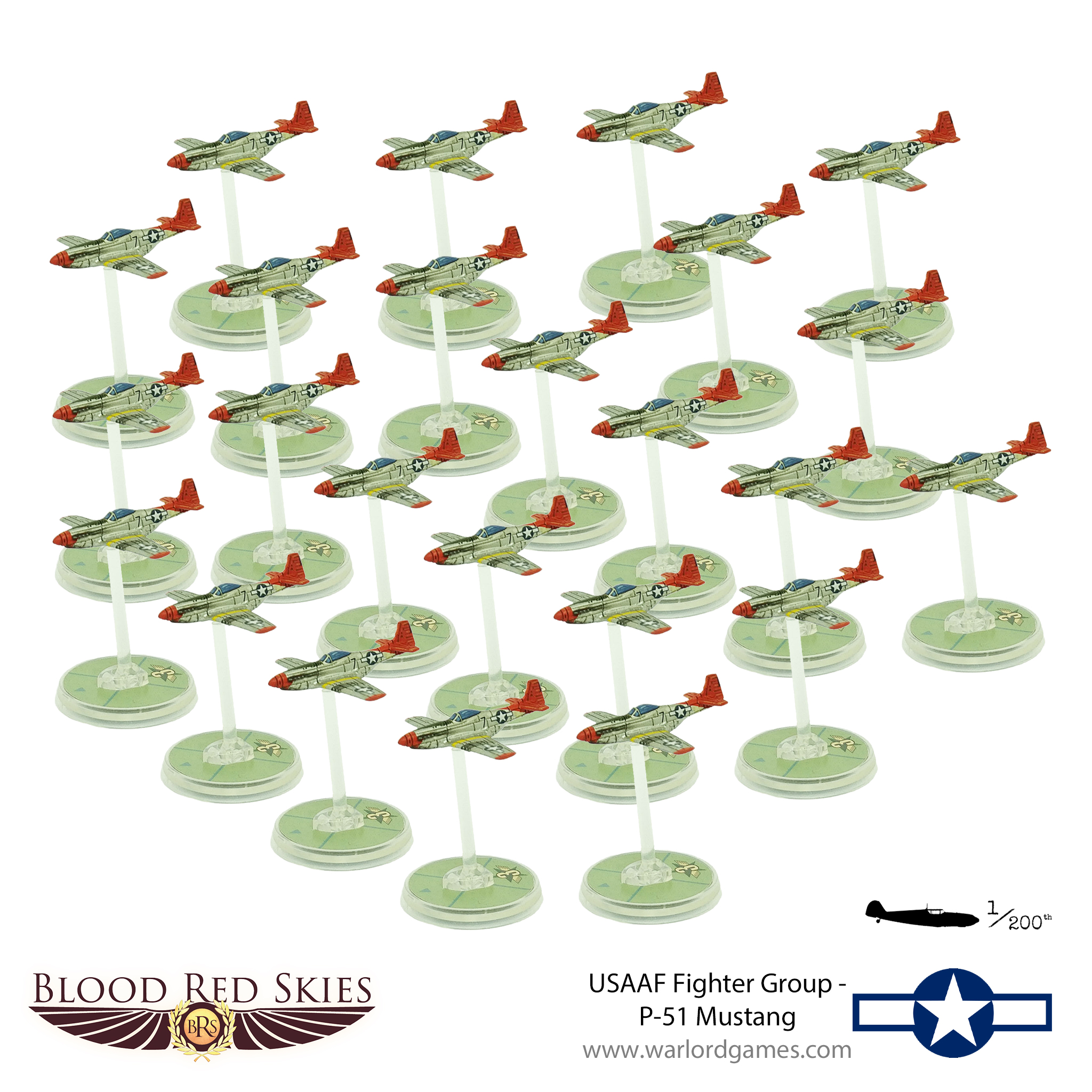 Prior to World War Two, the Japanese Army Air Service orchestrated a restructuring of its organisation. The resultant Air Combat Group (飛行戦隊 Hikō Sentai) was a single-purpose unit consisting typically of three Squadrons, divided into three flights (小隊 shōtai) of three aircraft each. Combined with reserve aircraft and headquarters, this meant that an air combat group would typically consist of around 45 fighter aircraft (usually fewer if the unit was dedicated to bombing or reconnaissance). Together with reserve aircraft and the headquarters flight, an Air Combat Group typically had 45 aircraft (fighter) or up to 30 aircraft (bomber or reconnaissance).

This bundle contains 4 squadrons of Zeros, for a total of 24 aircraft. Take the f(l)ight to the Pacific Theatre in Blood Red Skies! 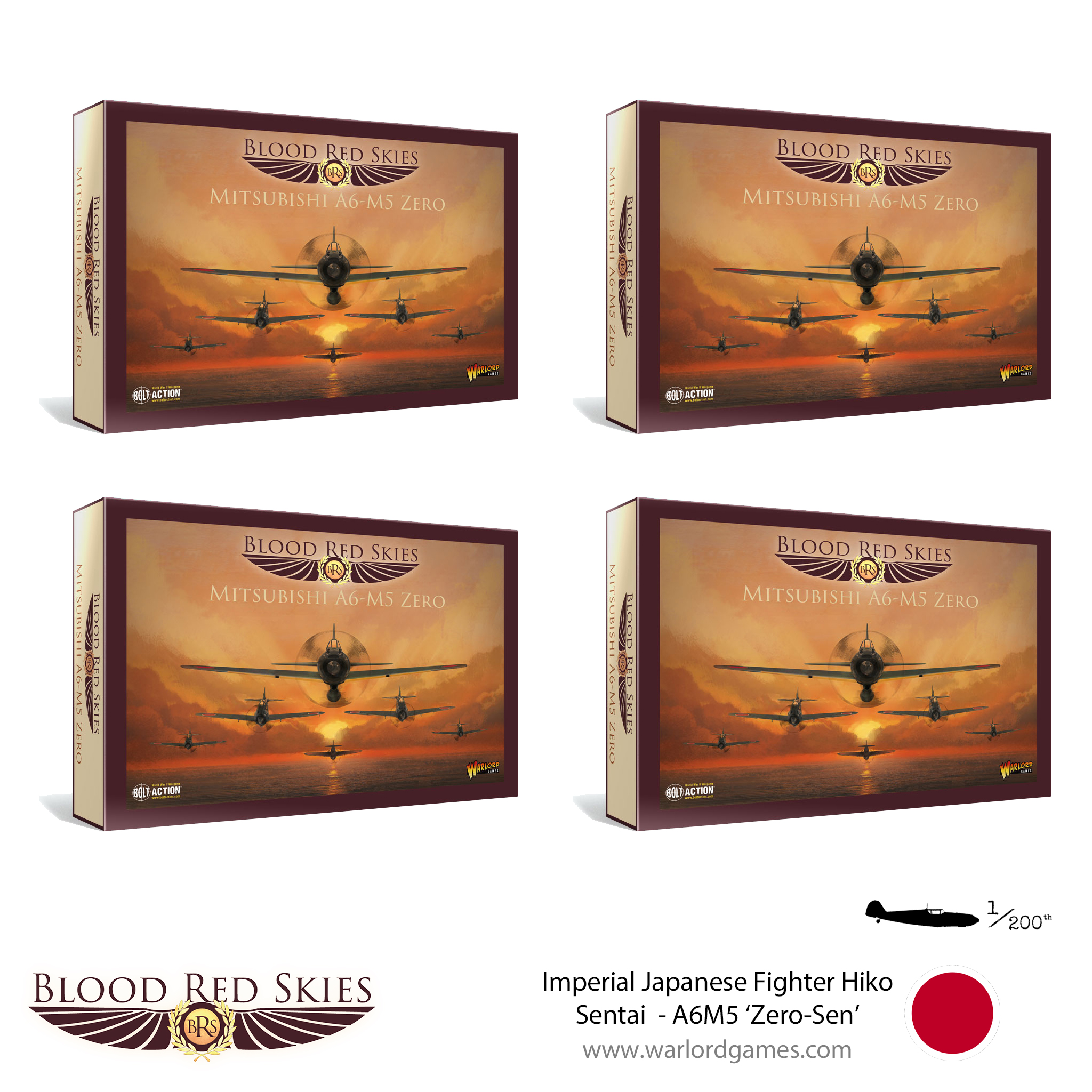 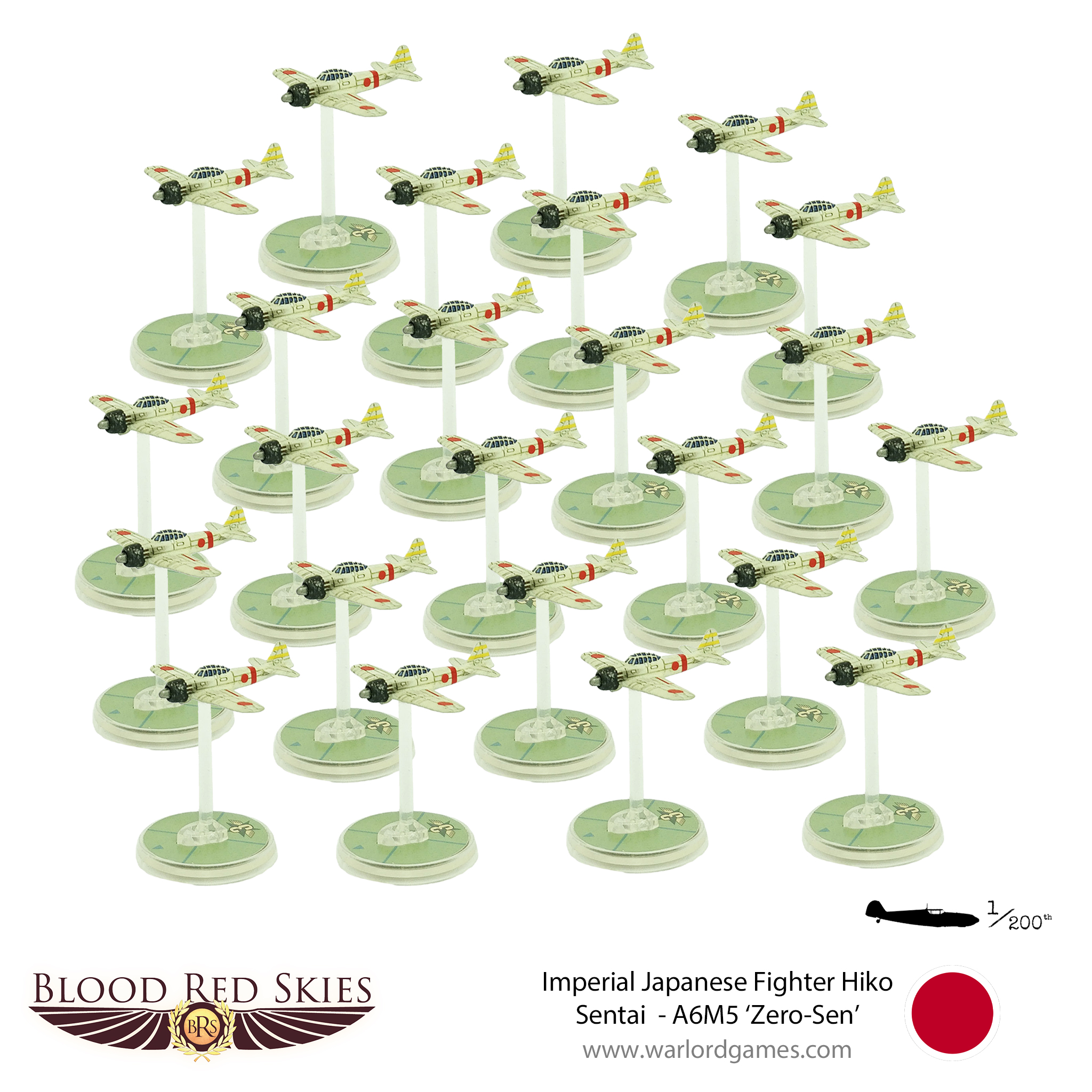 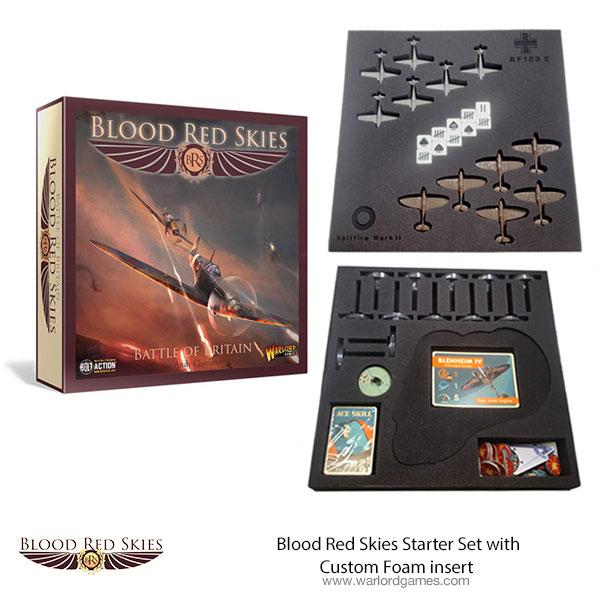 Dan can often be found contemplating the mound of unpainted minis building up under his desk. He has a tendency to roll lots of ones. He also has a tendency to complain about rolling lots of ones.
View Profile | View all posts by Dan Hewitson
Judge Dredd: Tourist’s Guide to MC-1
Blood Red Skies: Lev “Sokol” Shestakov