In this blast from the past, we travel back to the earliest of Black Powder days with a rather special ensemble… 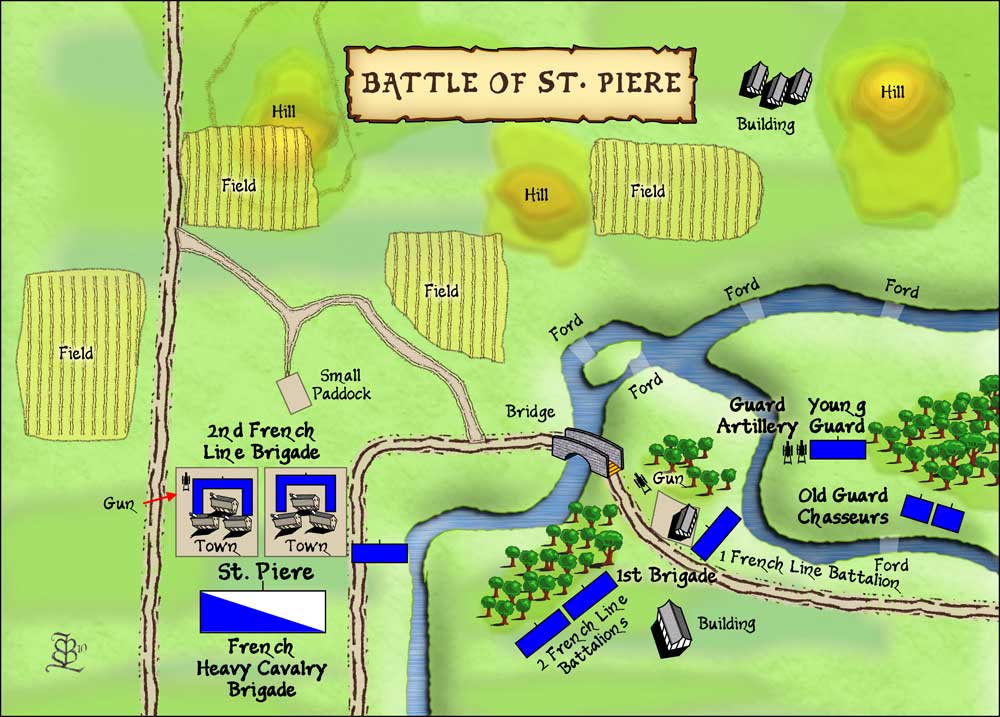 This game was based on a teaser taken from Charles Grant’s Table Top Teasers Vol 1 reproduced by Henry Hyde of Battlegames magazine – a fine source of scenario inspiration. 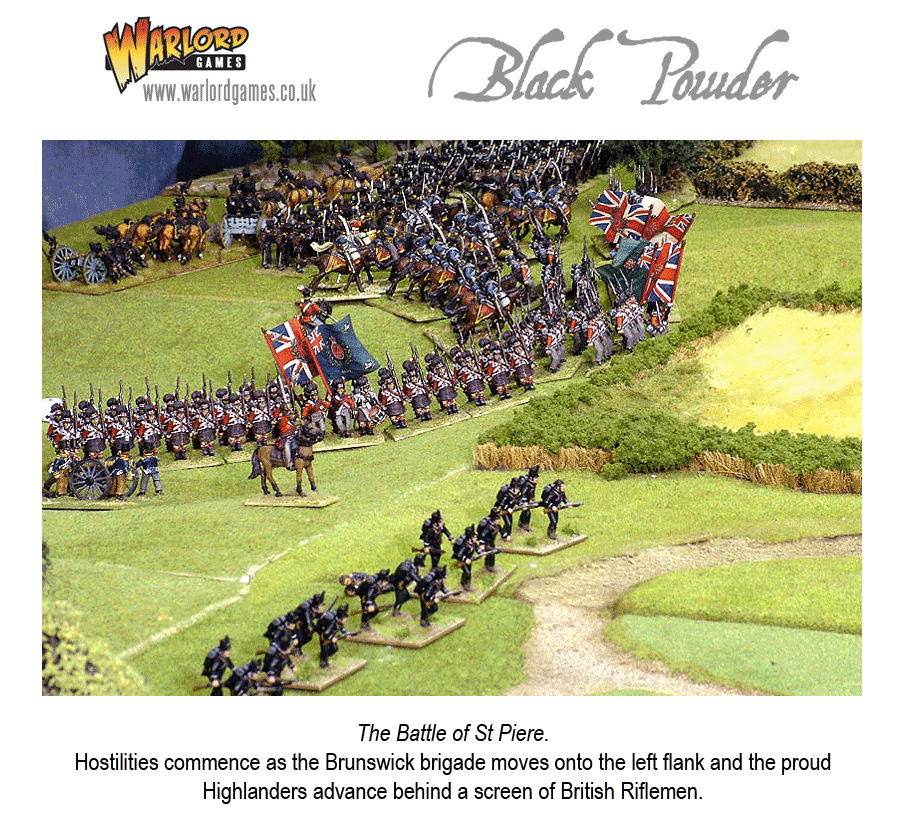 This particular scenario was ‘Turning the flank’, teaser no. 9. In the scenario, the defender holds a town and river line which is only crossable via fords and a bridge. The attackers have to cut the lines of communication, i.e. the road beyond the river and/or capture the town. The size of the forces were increased compared to those suggested in the teaser so as to produce a more ’man-sized’ game! The allies outnumbered the French nearly 2:1 as they were attacking. The French had the task of holding potentially all along the front (12’ of table!). 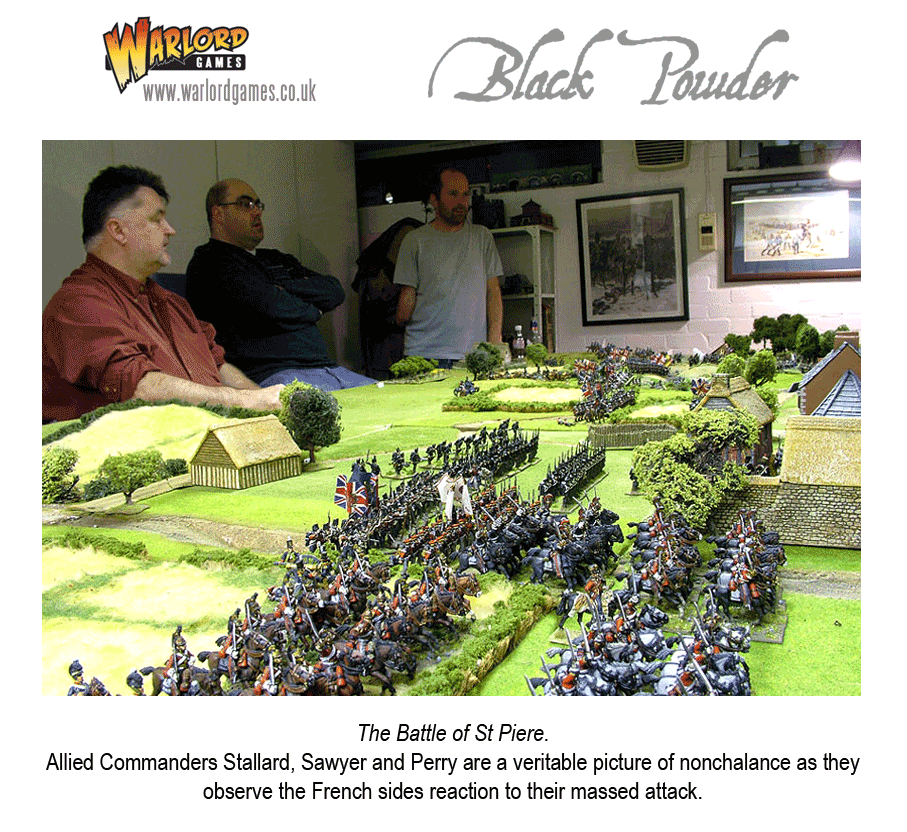 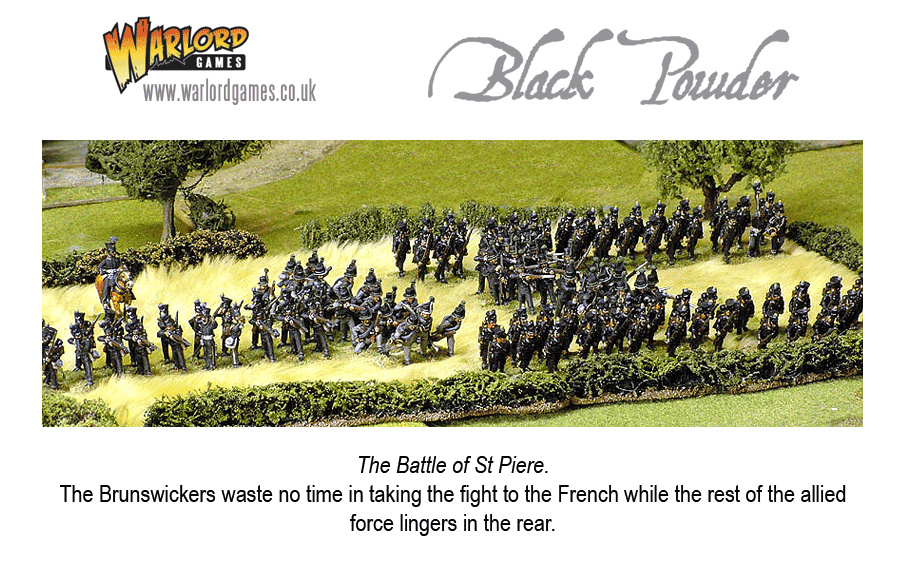 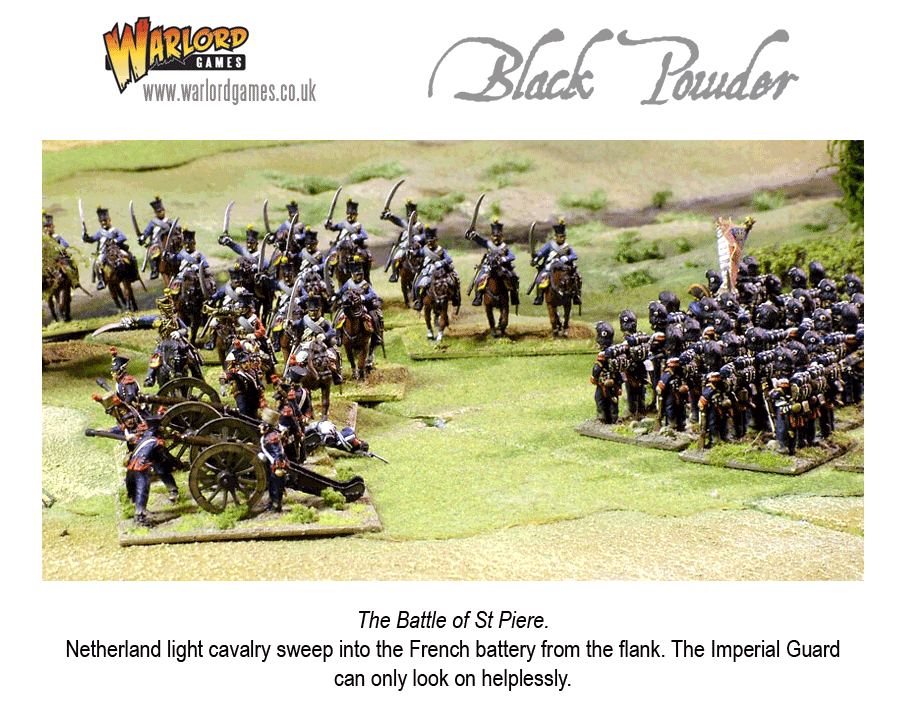 Rick and Peter decided the French 2nd brigade should hold the town and surrounding area, the Guards the right, defending two fords. The centre was held by the 1st brigade, with the heavy cavalry brigade stationed behind the town. Both these last two brigades and the two battalions of Guard Chasseurs were hidden at the start of the game, actually completely hidden from view in the room so the Allies had no idea what else was in store for them. This always brings about the right amount of tension for the opposing players and offsets their numerical advantage somewhat.

All the fords had to be scouted by the allies when a unit was within 12” of one it was revealed. We decided that instead of a turn limit to the game (as in the original scenario) we’d play until midnight (starting around 7.00) unless an objective was taken before. 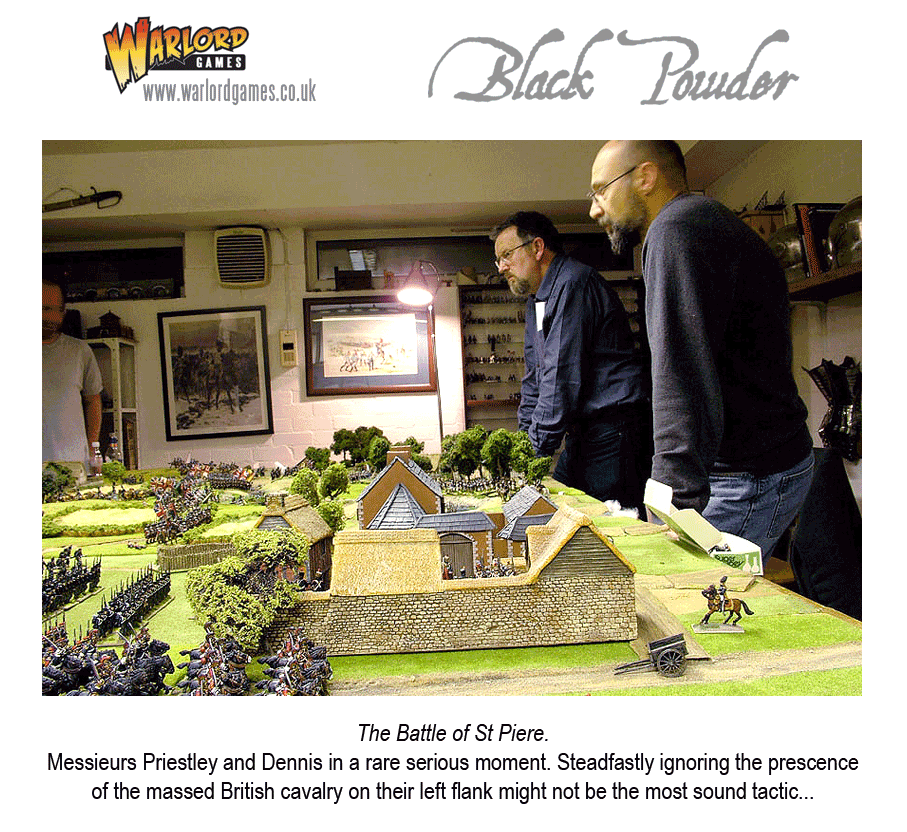 The Allied advance guard entered opposite the town and had the task of finding the fords, outflanking the enemy and cutting the lines of communication. Their advance was ponderous due to some very poor dice. In fact, when the main body of the Allies turned up (at the same entry point) one brigade, the Brunswick Light brigade overtook them heading for the river. As umpire, I allowed the main Allied army to deviate from the teaser’s scenario. They could re-enforce anywhere along the line, rather than just attack the town. 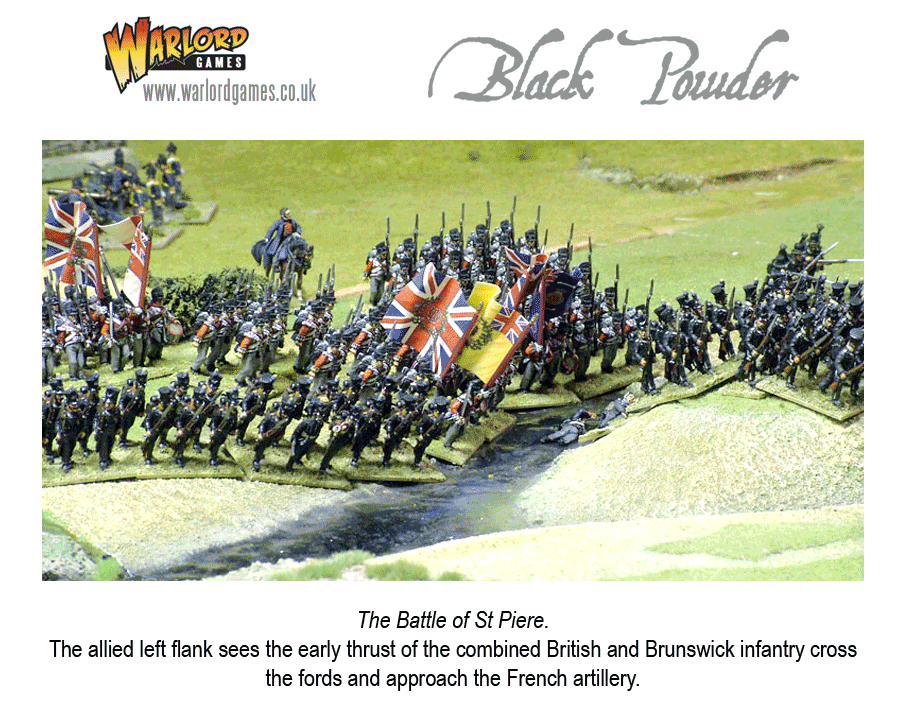 Unbelievably the head-strong commander of the French Guards advanced the single battalion of Young guards to the river line to hold a ford without any support! They suffered severely and were broken when Paul’s three British regiments advanced and poured fire into them. Around the same time, the head of the Brunswick attack was obliterated when the first battalion across the ford was canistered by the two batteries of Guard artillery. 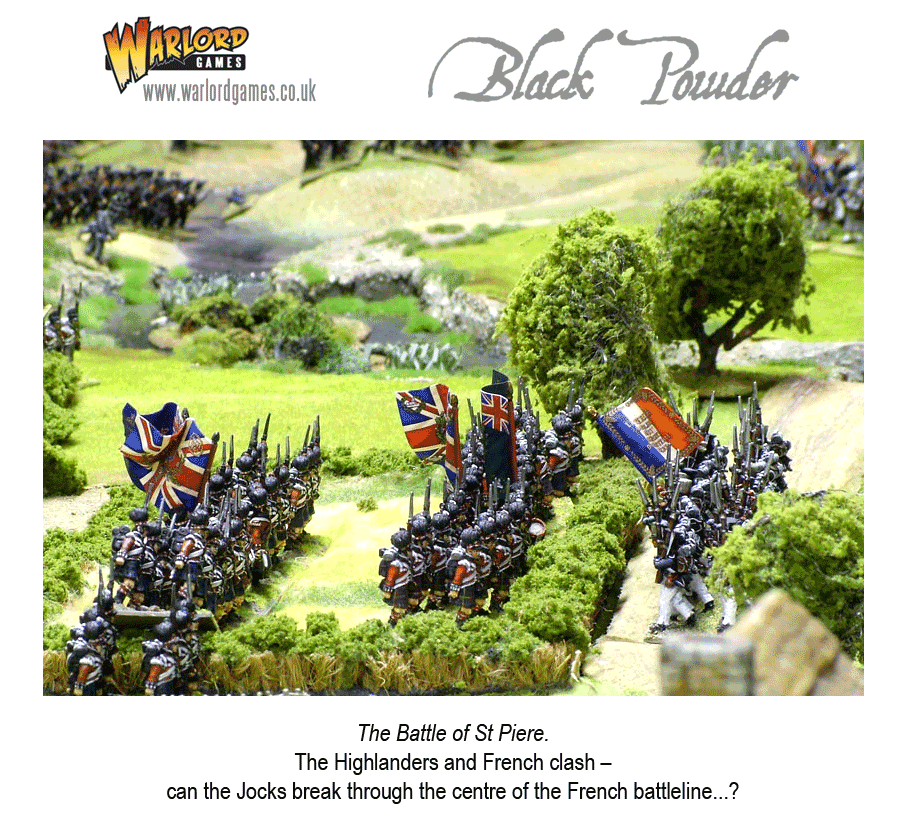 Although tempted to unleash his cavalry, Rick held back for as long as he could. Eventually, the British heavy cavalry brigade turned up and forced Rick’s hand. There ensued a classic heavy cavalry clash on the far left of the French line in which the British triumphed. 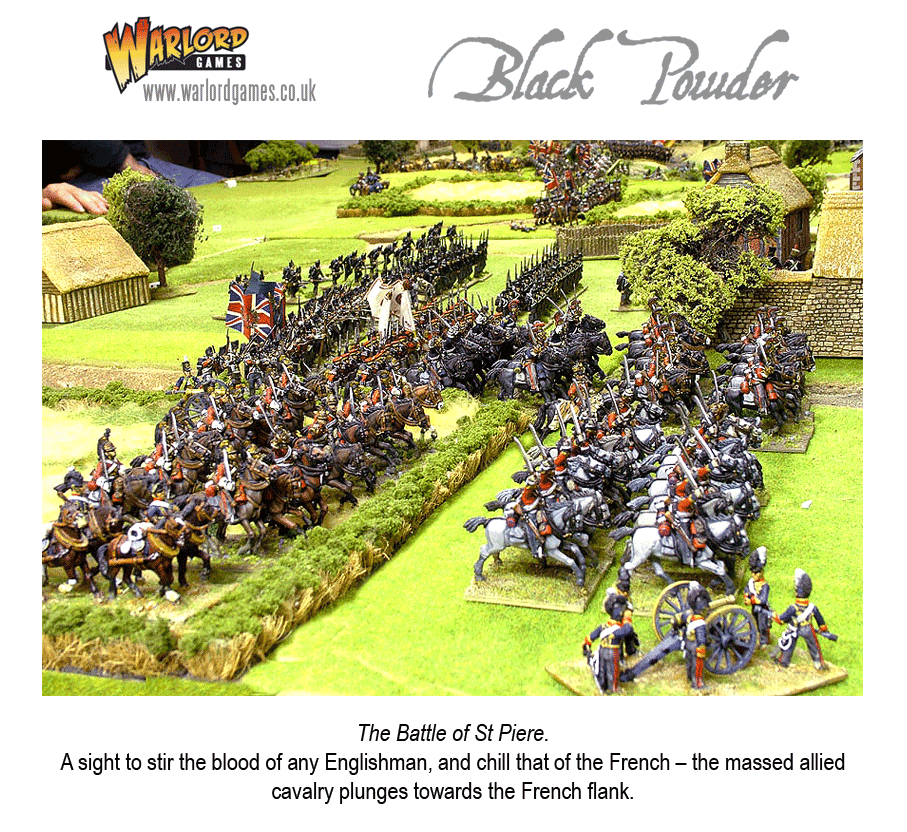 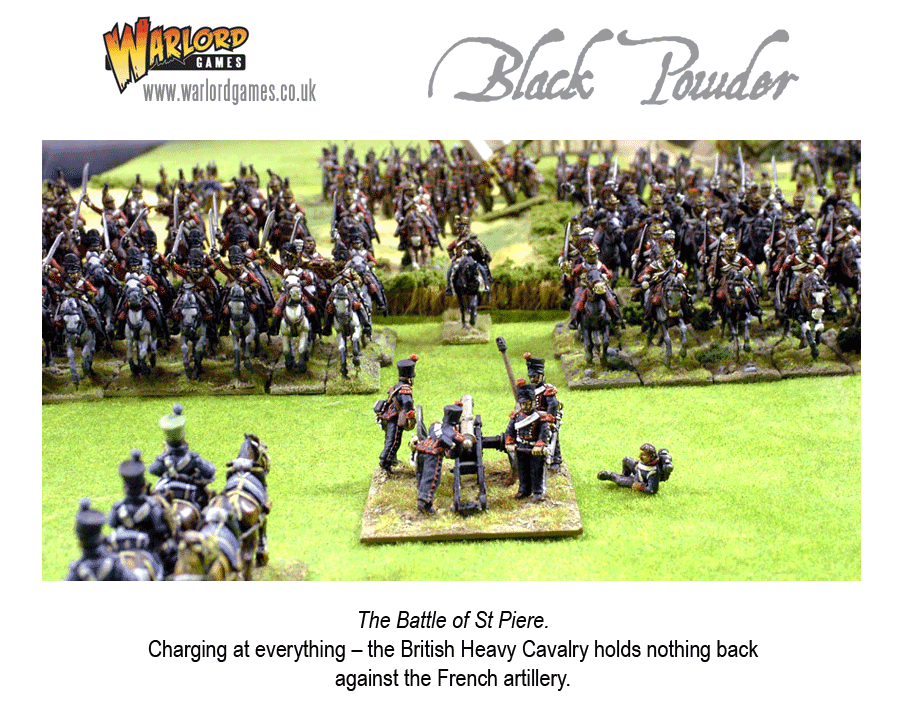 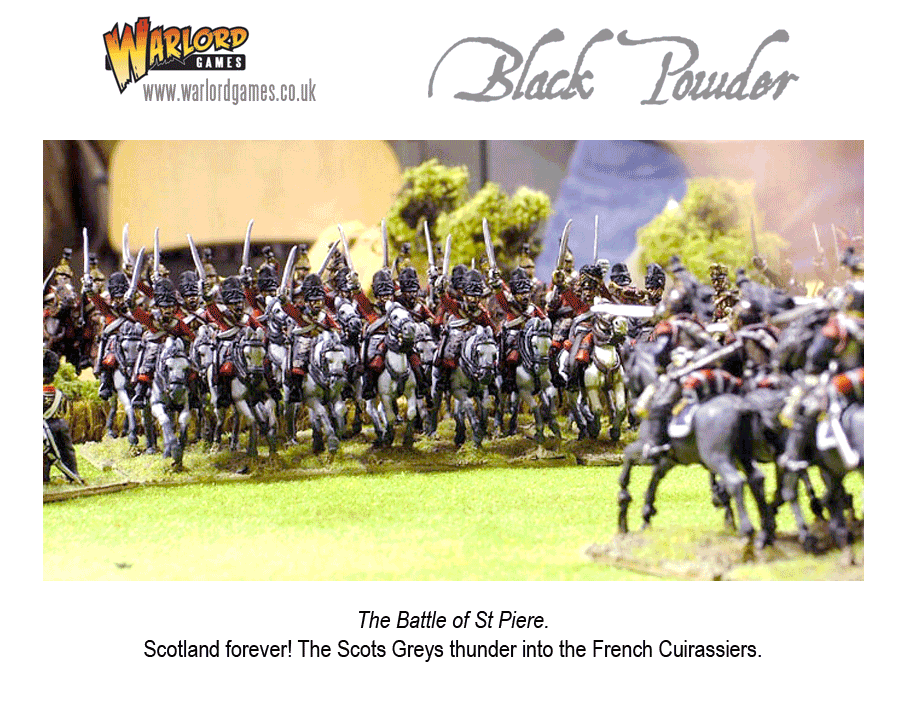 The pressure was building up all along the front with a heavy toll on both sides as the fords were carried one by one. Towards midnight Brunswick Jägers planted their feet on the road of communication and sealed the fate of the French. 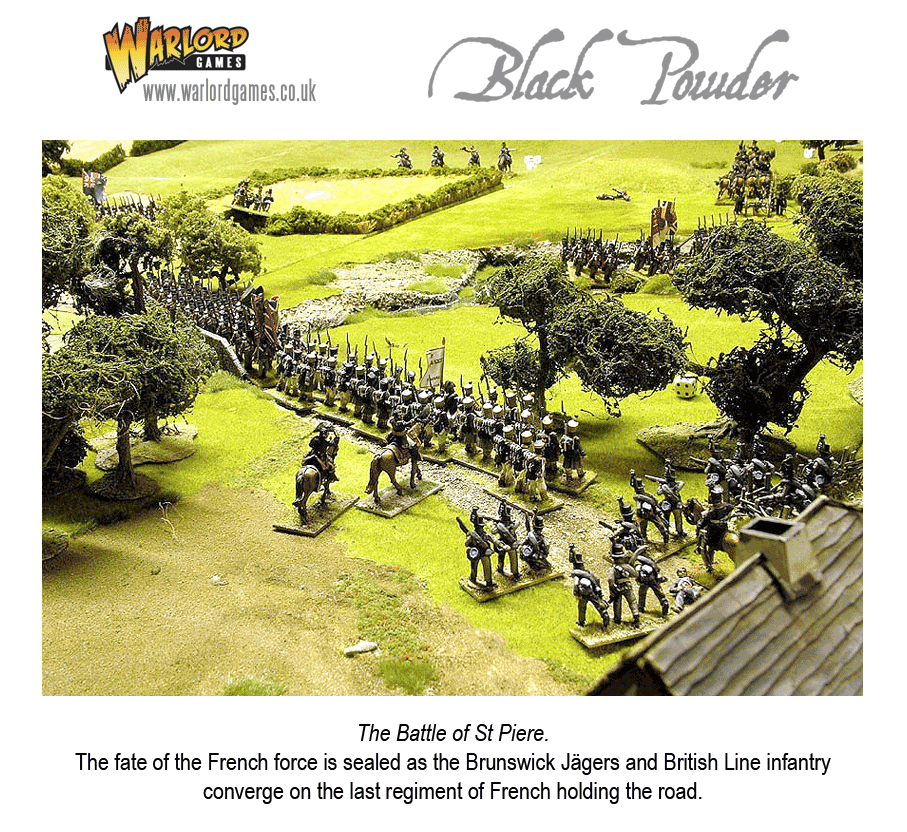 The teaser produced an excellent and close game which went right down to the wire.