For those of you looking to get started with the French-Indian War, we’ve got a brand new starter set for you – join the Battle on Snowshoes today!

This fantastic starter set takes you deep into the frost-rimed woods of North America, in pursuit of two of the French-Indian War’s greatest soldiers. Captain Robert Rogers and his elite company of green-coated Rangers have left their base at Fort Edward, delving through the snow-choked woodland towards Fort Carillion. 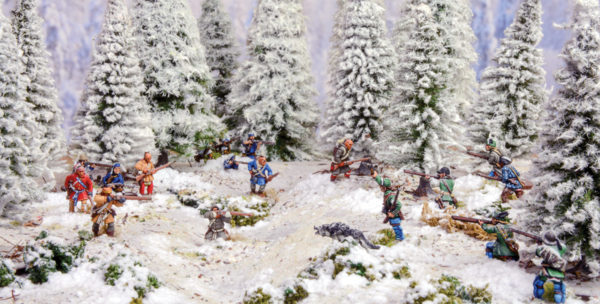 De Langy leads a company of battle-hardened French colonial marines, skilled in the same kind of warfare as Rogers’ Rangers. These two guerilla commanders and their native allies have skirmished back and forth across the frontier since the war began in 1754.

Rogers’ mission is to assess the disposition of enemy forces around Fort Carillion and report back to Colonel Havilland at Fort William. On this frosty March morning, with four feet of snow on the ground, these two forces are converging with dire consequences…

Tom spends most of his time buying books and painting miniatures. He enjoys putting animals on the bases of his miniatures and half-finishing side projects. Some say that he lives in a tower on top of some windswept northern hill with his wife and cow-patterned cat, Spaghetti.
View Profile | View all posts by Tom Mecredy
HMS Starling: with Walter Riley Jnr
Imperial Japanese Navy IJN No. 101-class landing ship