Background, Beyond the Gates of Antares, Concord, Work in Progress

Beyond the Gates of Antares players are in for a treat today with Commander Kamrana Josen – the first special character for the Concord. Check out the 3D digital render from sculptor Russ Charles and then read Rick Priestley’s background story for the Commander… 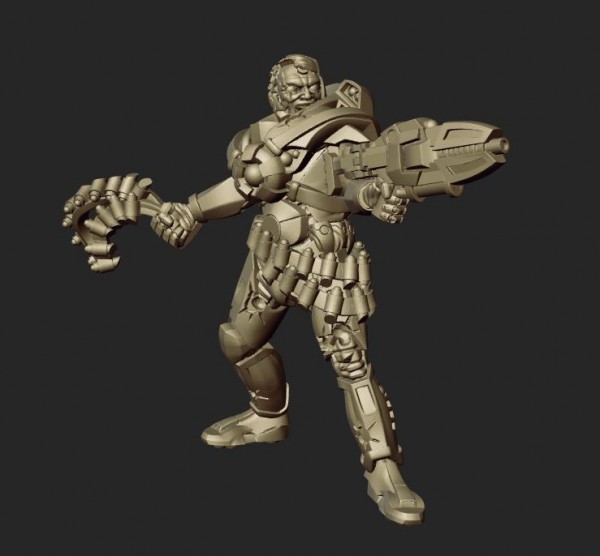 [Click on above image to view a revolving image]

Even in his youth Kamrana Josen had never been one to enjoy the easy life of the Concord – volunteering for exploration service in his twenties and taking part in armed missions to Tars Urgon, in the De’el campaign, and on the astreroid colonies of Ulk’ka G’neka. When the Vorl broke the seal of Aan Four in the Seventh Segment War, Josen was selected as one of the first Concord Commanders to lead troops into the old Aan Shard since it was plunged into thermo-plasmic chaos five centuries earlier. Josen’s company was in the first wave to make planet fall. He decided to land his ship darkside on Aan Four’s western continent to avoid contact with Vorl patrols. It was an unlucky choice – because only hours before the Vorl had managed to repopulate the planet’s sensors using remnant nano-spore.

A heavily armed Vorl AG unit intercepted Commander Josen’s company. Casualties began to mount. Before the first shot had been fired the Vorl threw a local suppression-shield around the area, making it impossible to get a message to the other Concord troops in the east. Josen’s company found itself pinned down by Vorl dug-in to the surrounding hills. As explosive plugs hammered into the rocky gully where they had taken refuge, Josen ordered his tech-support team to rig an overpowered hyper-light shield small enough for him to carry. Then, with the shield jury rigged to his battle armour, bandoliers of plasma micro-grenades, and his plasma carbine in his left hand, he launched himself at the nearest Vorl combat group. Exploding plugs ricocheted from his armoured shield, but soon he reached the terrified Vorl, shooting three grenades into the dugout where they were cringing, before finishing off the survivors with the carbine.

Unfortunately, the blast of his own plasma grenades had been enough to blow out Josen’s battlesuit’s blackout visor, but this did not deter him from advancing upon the second Vorl position. Despite suffering hits to his legs, Josen staggered towards the target, and once again a hail of plasma grenades struck the enemy position. He was so close that he was badly burned from the blast of his own grenades, and – thanks to the malfunctioning visor – practically blinded. Whilst his troops could only watch in amazement, Josen limped towards the final Vorl position, where the alien engineer with the suppression shield generator was cowering beside the Vorl Commander. With his battle armour’s sensors tuned to the acrid scent of the transgenic Vorl, Josen staggered into a hail of exploding plugs, relying upon his hyper-light shield to deflect most of the shots as he came with range of the grenade dispenser. Having seen what had already happened to their friends, most of the Vorl threw down their weapons and ran for it. Three more grenades soon reduced the shield generator to molten metal and the Vorl Commander to a bubbling smear of gelatinous goo, also melting off Josen’s right hand in the blast.

When his troops found him, half buried in a crater burned into the ground by his own grenades, they discovered that Josen’s armour had been penetrated twenty seven times. The Commander had lost his hand and suffered serious injuries to his legs and spine. He had also been blinded. With the local suppression shield knocked out the company was able to bring in reinforcements, and Josen was evacuated out of the fighting zone. He would spend the next three months of a six-month regeneration programme in a bio- tank, preferring to return to the fighting half-healed rather than miss out on further action.

If you’re a fan of Beyond the Gates of Antares, join the Facebook group to get early sneak peeks like the awesome Algoryn Scouter: 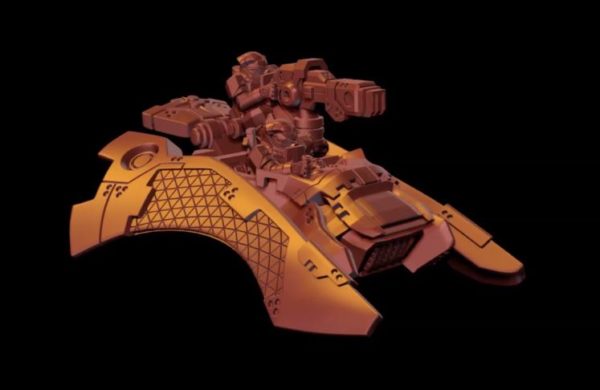 [Click on above image to view a revolving image]