Alessio Cavatore writer of the Bolt Action rules now brings you a fun set of scenario rules to get your inspiration flowing! 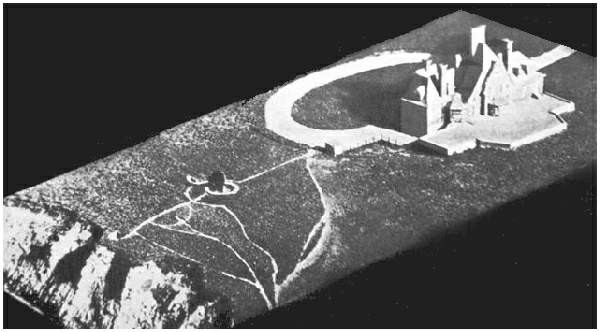 Night of the 27th February 1942. The men of ‘C’ Company, 2nd Battalion of the 1st British Airborne Brigade, led by Major John Frost, are jumping into occupied France.

Their objective is a radar station sited on the high cliffs of Bruneval, on the coastline not far from Le Havre. 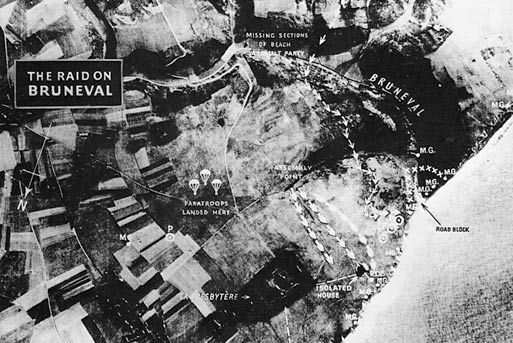 Their mission is to disable the radar and dismantle its controls in order to seize any important components that can, after being retrieved and studied by British scientist, help the British to improve their own radar capability and undermine the Germans’.

If any German technicians can be taken alive and also brought to Britain for interrogation, so much the better. However, nothing can get in the way of achieving the primary objective – all resistance must be swiftly disposed of. 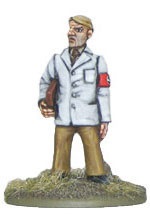 Technician from ‘Guarding the Chateau‘

Frost and his men have trained for this for months, they are only too aware that their mission has to be quick – drop, regroup, assault the radar station and nearby chateau, make their way with their precious bounty to the beach under the cliff, to be extracted by fast boats. Any delay would allow the Germans to bring in reinforcements on land, and extraction in daylight would prove too dangerous as the Luftwaffe and the Kriegsmarine could certainly wreak havoc on the evacuation force.

Will the resourceful and brave John Frost manage to achieve this dangerous mission? Or will the German garrison react too fast and kill or capture the Paras? The outcome is up to you!

This scenario is fought between an attacking force of British Paratroopers and a defending force of German soldiers of equal points values.

The British player must select his force, divided in a minimum of two and a maximum of five platoons, from the following selector. One Platoon must be led by Major Frost instead of a Lieutenant. At this stage of his career Frost is simply represented by a Paratroop* Major (see rules below), but feel free to use his rules from page 73 of Battleground Europe. 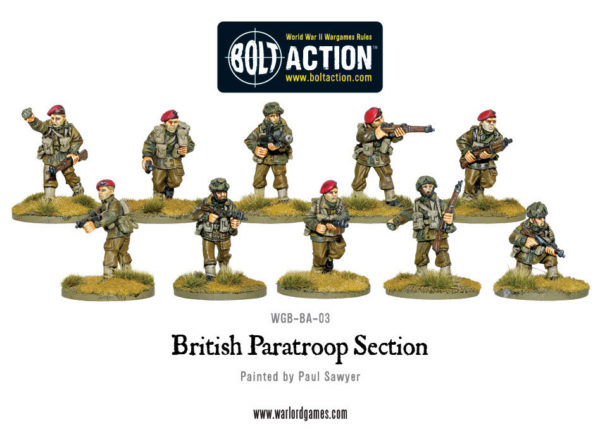 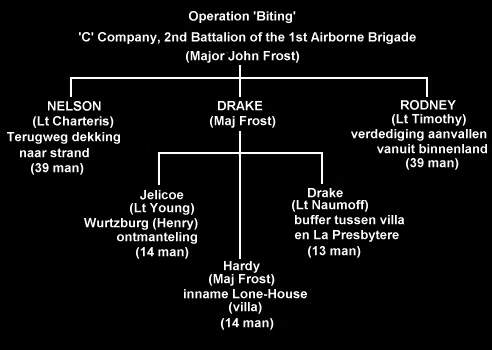 Paratroop* – Any specialists who were attached to the Paratroopers had to meet the elite unit’s exacting training and physical requirements. All units in this selector MUST be taken as Veteran. In addition, all units (except for Paratroop Sections) MUST spend an extra 1 point per man in the unit, giving them the ‘Stubborn’ special rule:

If a Stubborn unit is forced to take a Morale check, they always use their full Morale value, ignoring any pin markers (remember that Order Tests are not Morale Checks!). 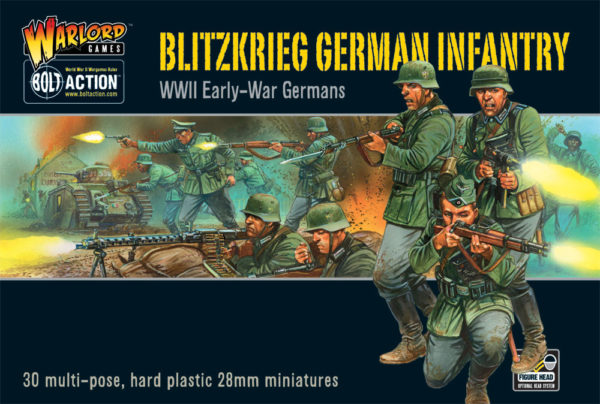 The German player must select his force from the following selector:

No German unit in this selector can be taken as Veteran. 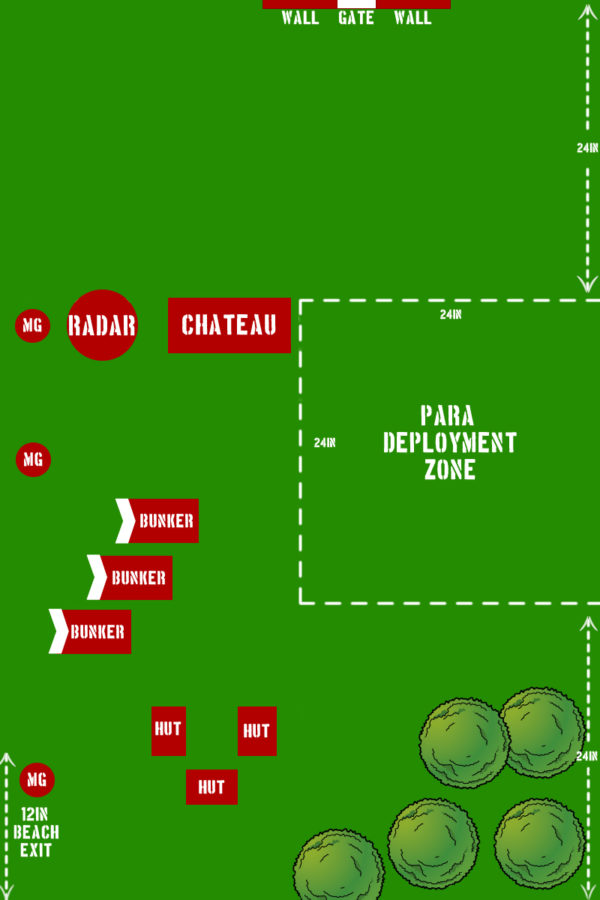 The British deploy in the area shown in the map, except for one Platoon (that cannot be led by Frost), which is left in Reserve.

Snipers, observers etc. pre-deployment rules, as well as any Outflanking are not permitted in this scenario.

The British must move a Paratroop infantry squad into the Radar station. This squad must spend an entire turn in the station being ordered to Rally – this represents them dismantling the radar and capturing German technicians. Once this squad exits the radar station, it is carrying a marker, as described in the Top Secret scenario in the Bolt Action rulebook (page 115), which represents vital radar components and prisoners. This marker must be moved out of the beach exit for the British to win.

The game continues until the marker is moved out of the beach or the British force is annihilated.

If the unit carrying the marker manages to move into contact with the table edge at the beach exit zone, shown on the map – it exits the table and the British win the game.

If a German unit ever gets the marker, or if the entire British force is annihilated, the Germans win the game. 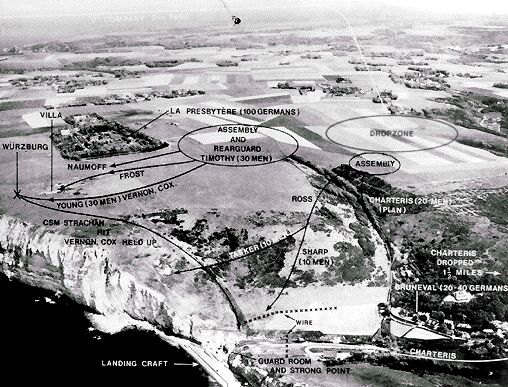 The gaming surface is set up as close as possible as shown in the scenario map.

The scenario takes place at night, the rules for night fighting are here (and no you cant use the night vision equipment, it is 1942 you know!):

The German units in Reserve can only begin rolling to come in from the beginning of turn 3. When a German unit in reserve becomes available, roll a die:

1-4: it must enter the game from the gate in the North edge of the table (or across the low wall, which of course counts as an obstacle).

5: it must enter the table from anywhere along the Eastern table edge.

6: it must enter the table from the south edge in the entrance marked as South Reserves on the map.

The British units in Reserve can only begin rolling to come in from the beginning of turn 4. In addition, they suffer an extra –1 modifier on their Reserve roll, and always enter the game from the South Reserves entrance.

To represent the vast numerical superiority of German forces around the area, in this scenario, when a German unit is destroyed, it is set aside and then at the end of the turn it goes back in Reserve at full strength.

At the end of each turn, the German player may also remove any of his units that are already on the table and put them back in Reserve, at full strength and with no pin markers on (i.e. a new unit). This represents the original squad deciding to ‘play possum’ for the duration of the night raid, melting in the darkness ‘til morning.

If an infantry unit is placed back into Reserve, and there is an empty transport in reserve, the unit can be placed inside the transport.

Now you know your mission its time to prepare your troops and also your battelfield! Check out these extras and be inspired to great feats of heroism. Good luck soldier! 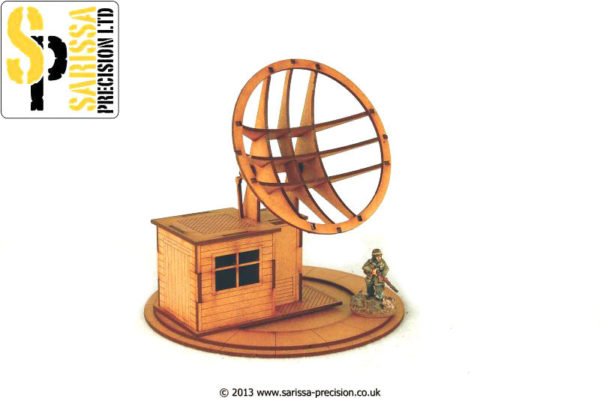 As the scientists work at deciphering Radar information and develop new technologies can your Commando units infiltrate the perimeter and snatch the scientist, or will they be able to set timed explosives and destroy the facility? 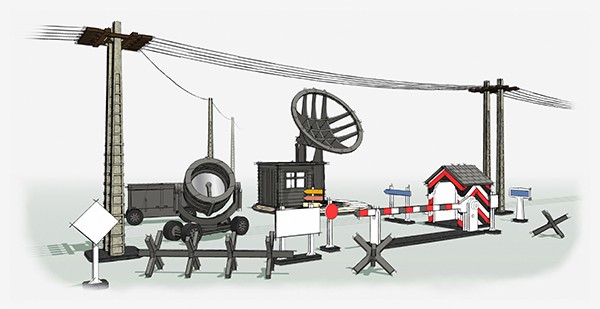 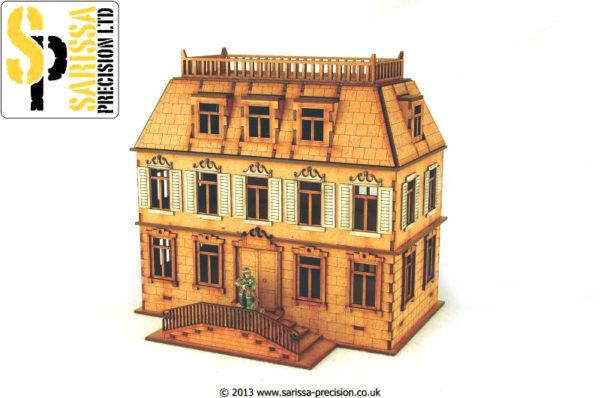