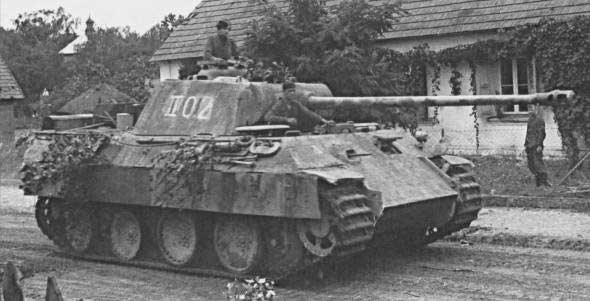 The Panther was the main battle tank of the German army and was one of the best all round tanks of the war. Sharing the same engine of the larger Tigers, the Panther was lighter, meaning it had greater manoeuvrability and speed. The sloped frontal armour gave it more protection from head on assaults, however being lighter had its drawbacks, the side armour was much thinner, making it vulnerable at close range. The 7.5cm KwK 42 L70 anti-tank gun was the bane of Allied tanks, and excelled at long range firefights.

German Medium Tank Platoons would tend to comprise of 5 tanks, with one designated as the commander. 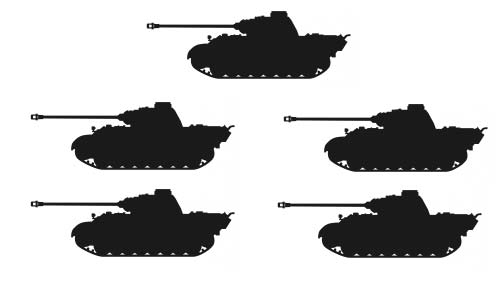 Overall thoughts: Its frontal Armour rating of 10 stops most incoming fire, allowing it to use its Super Heavy Anti-tank gun to devastating effect. Just keep the enemy off the flanks.

Best target: The heaviest vehicle the enemy can bring to the table!

Most feared foe: Being outnumbered by a number of lighter vehicles that can out-manoeuvre the Panther and get to its weaker Medium Armour on the sides.

Most memorable action: During a very large Tank Wars battle one lucky Panther took on and killed four Shermans, only to be immobilised in the process.

The Plastic Panther kit goes together quickly – the kit comprises two sprues and is supplied with an easy-to-follow assembly guide that gives step-by-step instructions that mean your tank will be battle-ready in no time.

The standard kit can be accessorized in several ways, with a quick trip to the Armoury – Decals, Stowage, German Tank Crew, and Alternate Head Sprues will all add to the character and uniqueness of your tank.