With the highly detailed building and furniture ranges from 4Ground arriving here at Warlord, we asked the guys that made them how they used the terrain in their Bolt Action battles. This nifty set of house rules (no pun, etc…) was promptly returned, and we decided to share them with the rest of you: 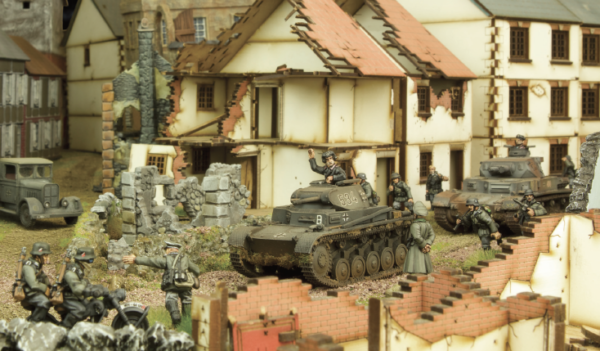 Moving into buildings:
Usually in Bolt Action when a unit runs into a building you consider the whole squad to be immediately on the ground floor (see pg 100 of the main Bolt Action book). With these 4Ground house rules when a unit moves into a building they need to receive and complete a normal run order (eg. 12” run) into the building through openings, following rooms and corridors as they go (in other words all distances within a building are actually measured and units cannot move through walls if they do not have openings).

It is possible that some models from a unit that have entered a building can be forced to end their move outside of the building, due to maximum movement distances. If any of the models from a unit are outside of a building they follow the standard rules for shooting (see pg 37 and pg 39 of the main Bolt Action rule book, as regards to half the models in a unit in terrain etc). Once part of a unit (this could be a single model) is in the building all models in that unit can move throughout the building using the standard advance order, but the unit can only go up and down floors following the stairs, ladders or openings caused by damage. Once all models from a unit in are in the same building they always count as in formation no matter the distance as long as they only occupy no more than two stories at any one time (note if a single model has not entered the building all models must be in formation). When a unit leaves a building they must end their move in formation. 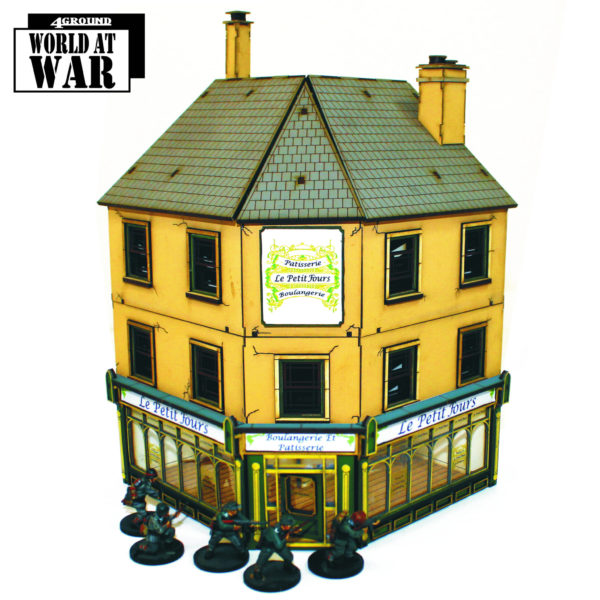 Assaults in buildings:
Usually in Bolt Action when a unit assaults a unit within a building they use a run order (see pg 104 of the main Bolt Action rule book). With these 4Ground house rules a unit assaulting a building must still assault through openings using a run order, they move up to their full move (12”) into rooms and corridors in the building until they reach a room or corridor (with their base fully inside) containing hostile models, this does not require base contact with hostile models.

All models on the same floor for each unit fight. Moving into a room with hostile models through an Advance or Run order counts as initiating an assault. In this instance this counts as assaulting a defended obstacle with both sides striking simultaneously. 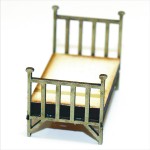 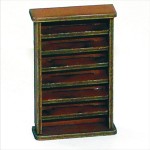 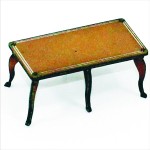 Now for the real fun bit – Furniture Barricades:
If a room has any furniture in it a unit within that room can use the furniture to barricade (we usually turn the furniture on its side against an opening to show this has happened – note one piece of furniture is required to barricade one opening). When a unit already in a building receives any order they may barricade any rooms that they occupy at the end of this order; to do this place furniture from any of those rooms in any openings of those rooms. These openings now count as barricaded. Openings that are barricaded give the unit in the room hard cover from shooting rather than soft cover (they still have the extra protection rule, 6+ to damage) and if they are assaulted whilst behind a furniture barricade they strike first rather than simultaneously.

After an assault against a barricaded opening has been resolved the furniture barricade counts as destroyed and is permanently removed from play, the opening no longer counts as barricaded. 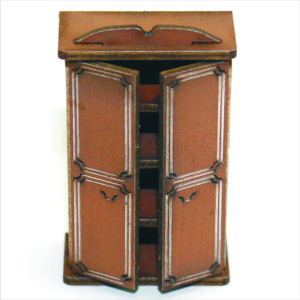 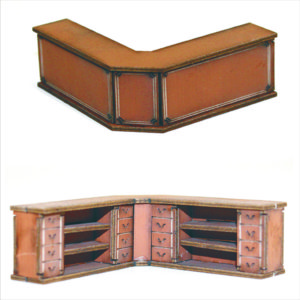 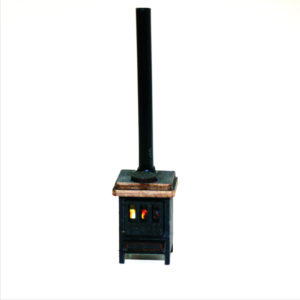 Shooting From Buildings:
When shooting from building openings use the standard rules in the Bolt Action Rulebook (see pg 102).

Plunging fire:
Usually in Bolt Action (see pg 102 of the main Bolt Action rulebook) a model on an upper floor using a heavy weapon scores the extra +1 penetration. With these 4Ground house rules if a model is on the second storey they can claim the plunging fire bonus (+1 penetration) if their target is within 6” of the building, 9” if they are on the third storey and 12” if they are on the fourth storey. For every storey after the fourth, plunging fire may be claimed every 3” there after (eg. sixth storey would be 18” for plunging fire). 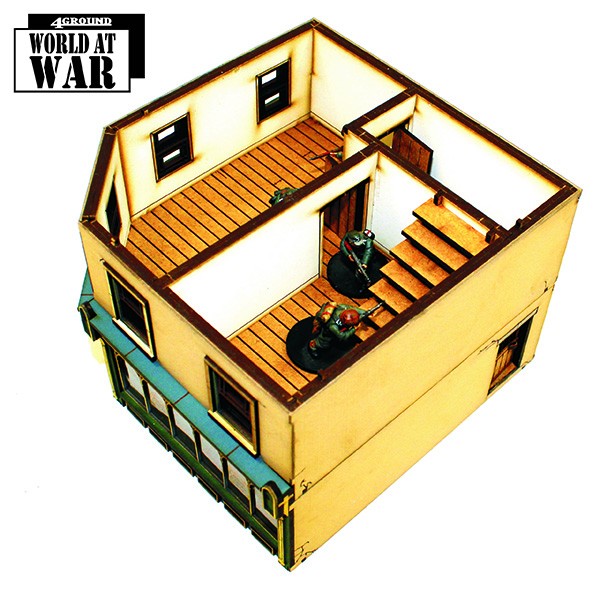 Shooting at Units in Buildings:
In these 4Ground house rules small arms still shoot at openings, but only models in the room or corridor with the opening targeted can be shot (see pg 102 of the main Bolt Action rulebook).

HE follows standard rules in the book. 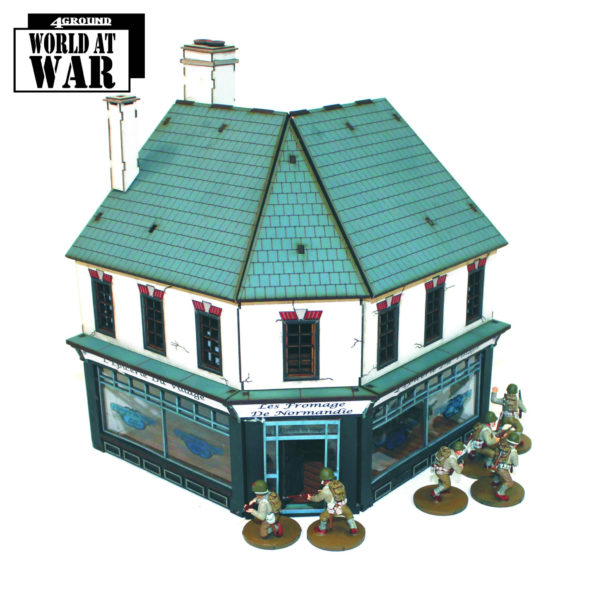 Mouse-holing:
Developed by the Canadians during the battle of Ortona in Italy during the Second World War. With these 4Ground house rule any unit armed with anti-tank grenades can make a mouse-hole, to do this a model from the unit must start in base contact with the wall already and receive a run order, the creation of the mouse-hole costs 6” of movement. To indicate a mouse-hole place a 4Ground breakthrough opening marker on the wall centrally under the models base, this now counts as an opening for movement and shooting purposes in the usual way, in effect these conjoined buildings have now become one building. The unit can then make a 6” move into the building. Any units that are assaulted by a unit mouse-holing do not count as defending an obstacle. This can be used to assault room to room in the same building. This process allows troops to assault conjoined buildings, building to building, without going through doors and windows. 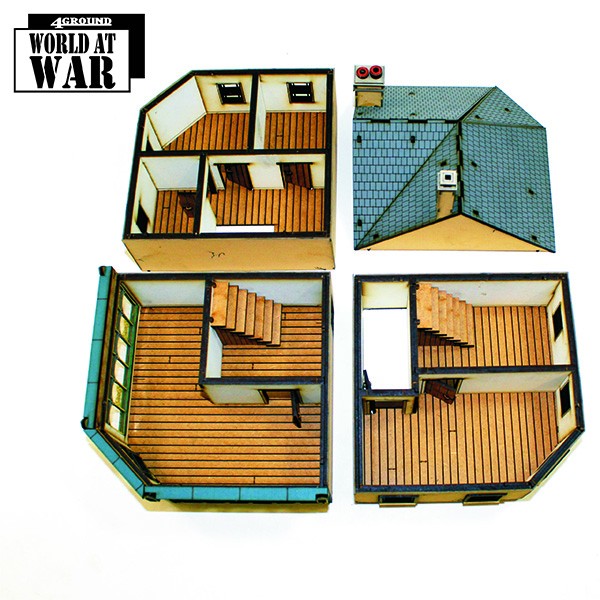 Back Blasts:
With these 4Ground house rules weapons with the shaped charge special rule (other than PIATs) used in a room or corridor can injure the user and friendly models in the same room or corridor. To represent this, when a model within a building shoots a weapon with the shaped charge rule (other than PIATs) roll 1 damage dice per figure within the same room or corridor as the shooter, as if they had been shot and remove that number of figures (so veterans die on a 5+, regulars on a 4+ and inexperienced on a 3+). No matter if the model with the weapon is removed as a casualty they still took their shot, so roll to hit and penetrate etc. as per normal. During the war veteran troops learned quickly that to fire weapons that created back blasts in buildings was almost as deadly for themselves and their comrades as it was for their enemy. Some veterans had learned to have the exhaust end of their weapon directed outside of the room they were in, even going so far as firing from a room with two corner windows, the muzzle of their weapon pointing out of one window and the exhaust out of the other.

I hope you enjoy experimenting with these house rules and by all means adapt them to work with your own terrain and gaming group. Best to check with any tournament organisers before hand as well – Have fun, Cad – 4Ground 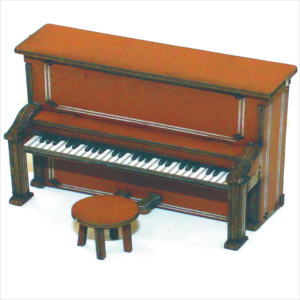 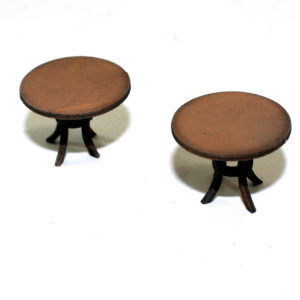 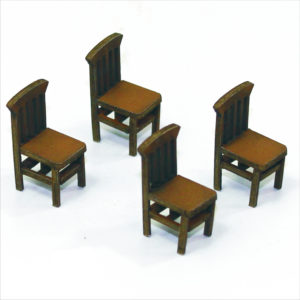