Bronze Age expert Nigel Stillman continues his series of articles on King Hammurabi of Babylon, his wars against neighbouring city-states including the Elamites and his final defeat at the hands of the Hittites. Click here for Part 1 – The Rise of Babylon.

WARS OF THE AMORITE AGE

From the fall of Ur in 2004 BC until the sack of Babylon by the Hittites in 1595 BC there were seven major wars, mostly in the time of Shamsi-Adad I and Hammurabi, sometimes being fought concurrently on different fronts and including many campaigns.  These were:

The Isin and Larsa War in which these cities contended for supremacy.

The Subartian War between Subartu under Shamshi-Adad I and Yamkhad-Aleppo, allied with Mari.

The Elamite War in which Hammurabi of Babylon and his allies prevented Elam swallowing up Mesopotamia.

The Larsa War of Hammurabi in which Hammurabi of Babylon defeated and annexed Larsa creating a united Babylonia.

The Eshnunna War of Hammurabi in which he extended his rule over the last powerful kingdom to defy him in Babylonia.

The Mari War of Hammurabi in which he conquered Mari by defeating his former ally and last great rival Zimrilim.

The Syrian-Hittite War in which Hattusili I and Mursili I defeated Yamkhad and went on to break the power of Babylon. 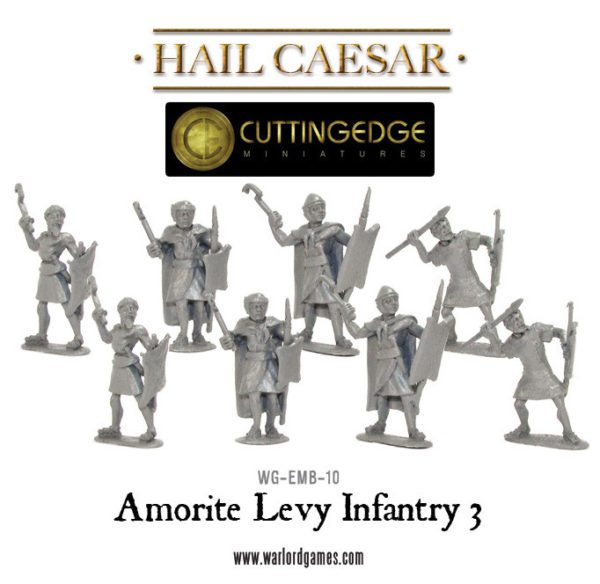 ARMIES OF THE AMORITE KINGDOMS

The armies of the Amorite Kingdoms were made up of troops raised from the landholding peasants, city-dwellers and local nomadic tribes and many allied contingents raised by local kings or city governors.  A document will usually refer to such units as the Babylonians, Ashurites, Eshnnnans, Khana, Sutu, Turukku, Suheans or Beniyamina and so on, with strengths of 100, 200, 600, 1500, 2000 or 3000 men. These should be seen as regional regiments, rather like a Roman document from Hadrian’s wall might list cohorts of Thracians, Gauls, Frisians etc.  The regional name indicates to the commander at the time what sort of troops they are and how armed.

Initially; their forces were based on later Sumerian military organisation and troops described as ‘of the land’ refer to those raised from the settled citizens and peasants according to age-old methods.  These troops included regular soldiers augmented by territorials and conscripts called up in time of war (which was usually continuous.) equipped by the palace (the government) from its workshops.  Added to these troops were tribal contingents recruited from nomadic or partly settled Amorite tribes within the kingdom, as well as mercenary warbands from further afield such as Gutians and Hurrians, and later Umman-Manda and Kassites who provided chariotry.  Alliances between kingdoms resulted in allied contingents lent to front line rulers by powerful kings who could spare troops such as the kings of Elam, Babylon or Subartu (Old Assyria.)  The reliability of some contingents was therefore often questionable because of the rapidly shifting alliances.  Nomad tribes might just move from one kingdom into another.

The troops raised were regarded as heavily armed or lightly armed; in other words heavy or light brigades.  The cities and the surrounding land providing the former, while the nomadic tribes usually provided the latter.  The heavier troops included infantry armed with long or short spears, various kinds of armour and big or small shields, as well as royal guards and troops armed with axes or bows, and some two wheeled chariotry drawn by four asses or a few faster chariots drawn by two horses.  Mounted scouts and couriers were a vital part of the regular forces.  Light troops were irregular infantry armed with bows, javelins, slings, throwsticks, little armour and sometimes bucklers.  It seems from the texts that the heavily armed troops fought in closer formation than the lightly armed troops, who were more flexible in their actions and useful for ambushes.

Boats were essential for transporting troops up and down the Euphrates and Tigris and some kings like Hammurabi and Yarimlim had huge flotillas (Yarimlim had 400.)  These would be transports and warships each capable of holding 100 men.  Siege towers, ladders and siege engineers were often deployed, and Mari was a centre for constructing siege gear and all kinds of armaments under Yashmakhaddu and Zimrilim (the same overseer ran the workshops under both regimes!)

Ilku – Military service in return for land holding (do it yourself – death penalty for sending substitute!)

Tuttitu and Irtu – Leather cross-strap armour and round bronze breastplate.

Nigel’s account will continue next week, while you can find more information on wargaming with an Amorite army of this period here. To pick your army, check out our Amorite Kingdoms range.