No one is exactly sure whether the Amorites were native to the whole region west of Mesopotamia, or more specifically the part that corresponds to northern Syria west of the Euphrates. We do know that from the end of the 3rd millennium BC – about 2100BC onwards – they descended upon the lands of the Akkadians and Sumerians in great numbers. They were probably driven eastward by draught resulting from climate changes in their native land, and they came in search of grazing for the cattle herds that were their main source of livelihood. These roving warrior bands became such a nuisance that one of the last Kings of the Third Dynasty of Ur built a huge wall between the Tigris and Euphrates, 170 miles long, to try and keep them out! Contemporary records speak derisively of an uncultured people, ignorant of agriculture, without permanent settlements of any kind. However uncultured they might have been, they were obviously fierce fighters – and numerous!

With the collapse of the Akkadian/Sumerian cities around 2000BC the Amorites poured unchecked into Mesopotamia. They settled amongst the native population, rising to power over them in many cases, taking over existing settlements and establishing their own Amorite dynasties. From this period of anarchy emerged new Amorite Kingdoms. The succeeding four hundred years are sometimes known as the Amorite period of Mesopotamian history (c.2000-1596BC). The new rulers organised their realms quite differently to the earlier centralised states of the Akkadians and Sumerians. Lands that had previously belonged to the temples or the crown were distributed to a new class of landed gentry. The old temple-based systems of obligatory labour and tithes were replaced with a free citizenry. Where the King and High Priests (often the same person) had previously controlled trade and the distribution of goods, now these things fell into the hands of independent merchants and artisans. This economic and social revolution changed the course of Near Eastern civilisation – heralding the beginning of the Middle Bronze Age (roughly 2000BC-1500BC). In many other respects the culture established by the Akaddians went on much as it had before, the Akkadian language continued to be used – albeit with an admixture of Amorite (itself a western Semitic language) and records continued to be written in the cuneiform script. New gods – such as Marduk – arrived with the Amorites, but old Akkadian and Sumerian gods continued to be worshipped in their age-old temples. 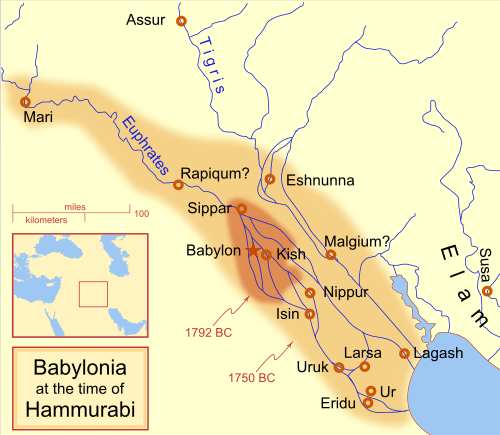 When it came to warfare the greatest change from previous centuries can be seen in the evolution of the chariot. Technological developments gave warriors stronger, lighter and more efficient wheels. Chariots began to look like what we think of as chariots rather than the earlier four wheeled battle-cars and carts of the Sumerians. The horse began to appear in the Near East during the later part of the Amorite period, replacing the Onager used by the Sumerians. Chariotry would become the prestigious, elite and decisive weapon of warfare. Warfare between the rival states, and between these states and barbarous neighbours, continued as it always had. The most powerful states to emerge from the ruins of the old Akkadian cities were Isin, Larsa and Assur. Mesopotamia remained a region of small, independent city-states of varying degrees of wealth and influence.

Although a settlement at Babylon had existed before the coming of the Amorites, it was an undistinguished place of no real significance. The Amorites founded the city of Babylon in 1830BC. It would become the biggest city in all of Mesopotamia and the centre of the most important and powerful of the Amorite kingdoms. The most well known ruler of Babylon during this period is Hammurabi. In 1728BC Hammurabi inherited a small realm that included several local cities, but which was no more important than other surrounding states. The most powerful of his rivals was Elam to the south east, which had invaded Mesopotamia and taken over many of the cities to the south of Babylon. Hammurabi mustered allies from the north and defeated the Elamites. In a series of further campaigns the kingdom expanded until it encompassed all but the northern Tigris region of Assyria. The Babylonians eventually overcame even their northern rivals after a series of border wars. The victory can’t have been entirely complete, however, because the Assyrian King continued to rule as a tributary of Babylon. The Babylonians never sought to occupy or absorb Assyria, and following Hammurabi’s death the Assyrians quickly asserted their independence. 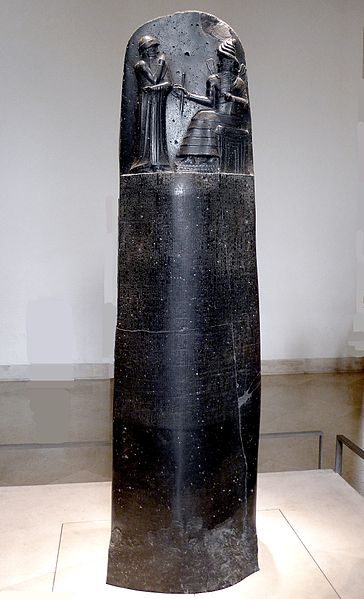 Although Babylonia came to represent the might of the Amorite Kingdoms, in reality its dominion lasted only a short time. After the reign of Hammurabi the empire he had created began to disintegrate. The patchwork of small, independent kingdoms began to reassert itself. Amorite Kingdoms stretched as far as Syria, including Yamhad, which was centred upon modern day Aleppo, and Qatna, which lies to the north of Homs. Mari, strategically placed on the Euphrates, also remained a powerful city under the Amorites.

The Amorite period came to an end with the sack of Babylon by the Hittites in 1595BC after which new peoples rose to the fore in Mesopotamia. These included the Hurrians in the north and the Kassites, a tribe from the Zagros mountains to the east. Under the Kassites Babylonia ceased to be a land of rival cities and occasional empires, and became a nation for the first time. The Amorites continued to rule of the lands to the west, notably Canaan and Syria, where their language continued to be written until the end of the millennium.

This is the army of Babylon under Hammurabi which drove the Elamites back from Mesopotamia and established an empire that stretched from Mari to Ur. Chariots are now a firmly established part of armies of the Near East. The option to field Sabum Kabitum as spearmen reflects earlier Akkadian tactical practice and allows us to field an army from before the rise of the Amorite dynasty of Babylon (c.1894 BC). Sabum Kabitum means ‘heavily armed’ and describes the regular, trained troops who had something by way of armour. Sabum Quallatum means ‘lightly armed’. By Hammurabi’s day Babylonian troops fought with shorter spears and javelins in the Amorite style. This list can also be used for the succeeding Kassite period that emerged after the sack of Babylon by the Hittites (c.1585 BC). It will also serve to represent any of the Amorite Kingdoms of which Babylon was the largest and most powerful: for example, Isin, Larsa, Eshnunna, Ashur, Mari and Yamkhad. 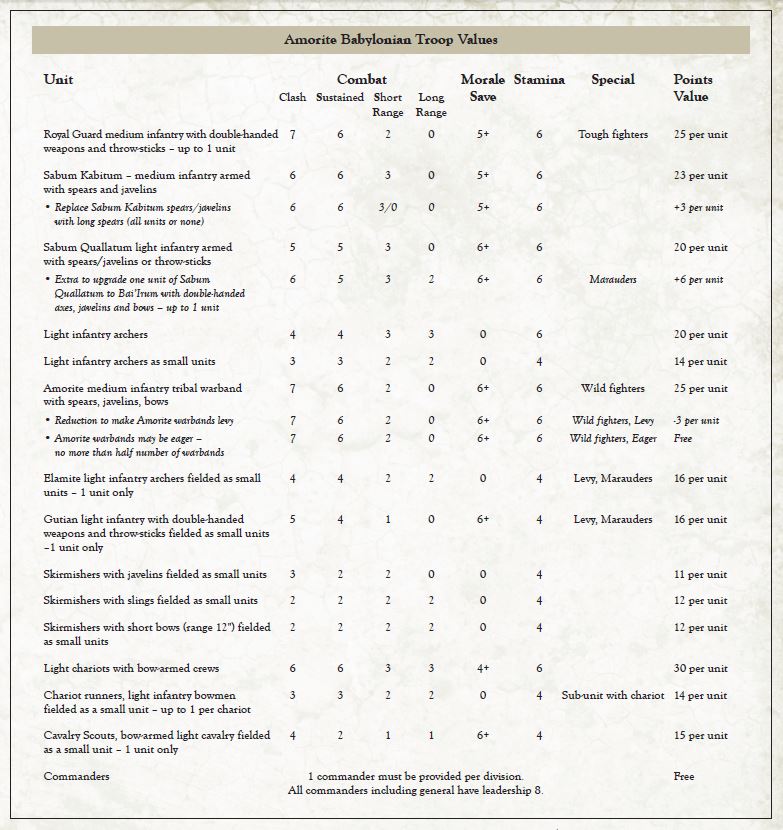 You can see our growing range of miniatures suitable for the Amorite Kingdoms here.