Head to head: Panther Ausf A vs M26 Pershing

Happy new year everyone! Today I’m going to be looking at a pair of fearsome vehicles from the late war period, the German Panther Ausf A, and the American M-26 Pershing. For those interested, there is some footage on Youtube filmed outside Cologne cathedral in March 1945 between a 3rd Armoured division Pershing and a Panther, however the footage is quite graphic if you do go to watch it. 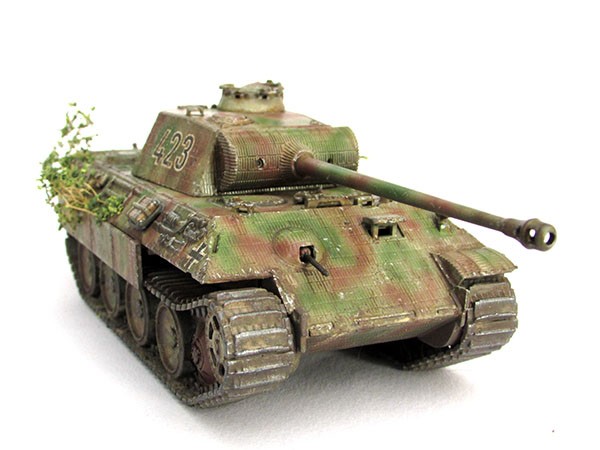 Development of the Panther began in late 1941 as existing German medium tanks, the Panzer III and IV were starting to edge towards obsolesce in the face of new and comparatively advanced Soviet armour, notably the T-34 with its blend of well protection speed and firepower being revolutionary when first encountered. 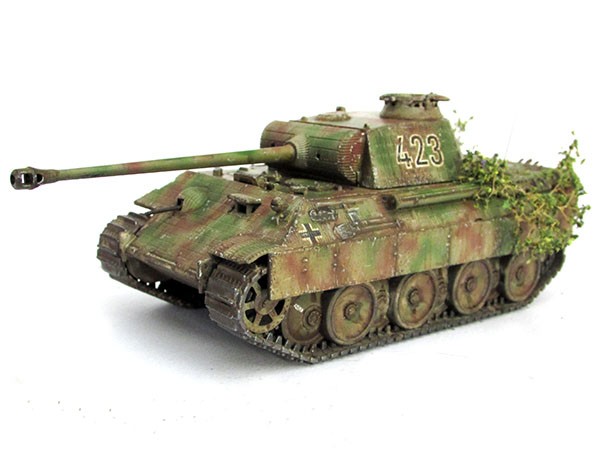 As with most German designs, competing prototypes were created, one produced by Daimler Benz, and the other by MAN with the brief being to create a well-armed vehicle with sloped armour and good mobility whilst weighing between 30 and 35 tons. Two prototypes were presented at the beginning of 1942, with Daimler Benz’ vehicle very much mirroring the T-34 whilst MAN’s design was a much larger design, and utilised a similar suspension system to the Tiger 1. MANs turret was also much larger than the Daimler Benz offering, and this was deemed a considerable bonus as fitting the planned 75mm L70 high velocity anti-tank gun along with a 3 man turret crew was proving difficult with the Daimler Benz vehicle. After nearly a year of trials, the MAN designed proved to be the superior machine, and in late 1942 a production order of 1000 vehicles to be delivered by early 1943 was placed. 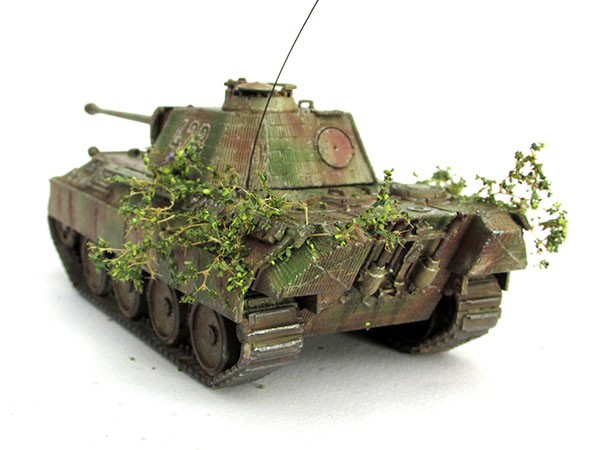 The Panther was an advanced and relatively complex vehicle, and required specialist production facilities. With the frenetic pace of development and introduction to service, production was slow, and fairly low numbers of vehicles were produced initially, and those that were built had significant teething problems, with reliability being exceptionally low, and the vehicle was also prone to catching fire. 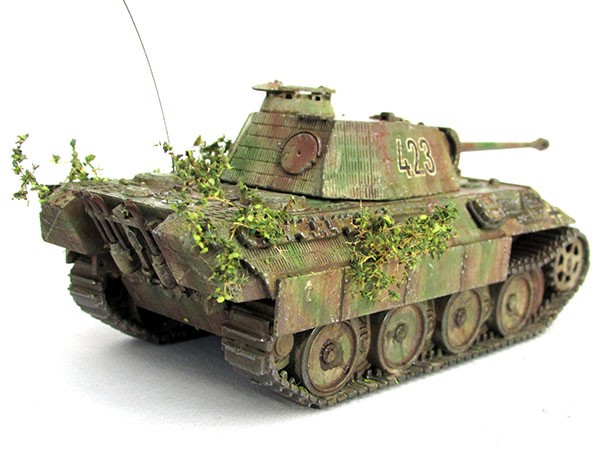 However, these were fairly rapidly ironed out, with the D version being the initial production vehicle, followed by the Ausf A (due to initial pre-production vehicles initially being classed as the A version and later renamed), with the final production variant being the G type. These later vehicles managed to combine excellent armour, firepower and mobility, along with decent reliability, and ease of production (by German standards), with production continuing until the very last days of the war, and even some vehicles being rebuilt post war from factory components for examination purposes. 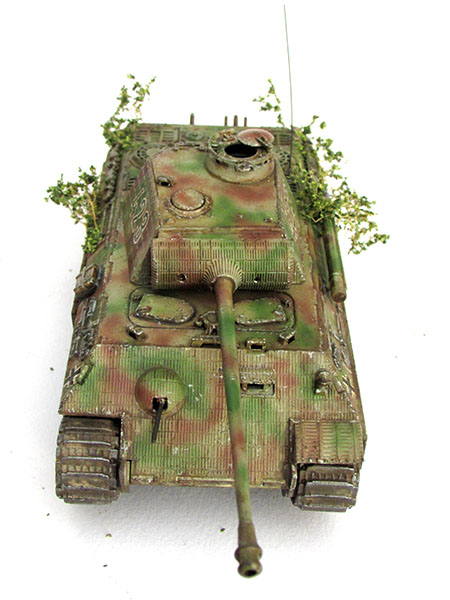 In combat the Panther was a fearsome opponent, very capable especially for the defence warfare the Germans found themselves engaged in, the Panthers first combat deployment was at the 1943 Battle of Kursk, and whilst the serviceability proved problematic, those vehicles that did see combat were recording kills of T-34’s at distances in excess of 2000m. 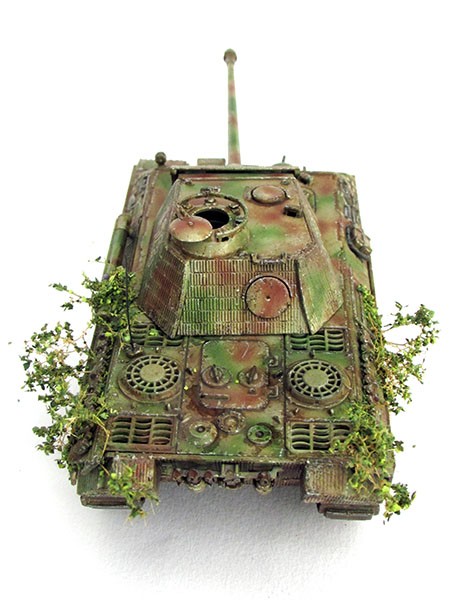 Following on from this initial deployment of the D series vehicle, production soon switched to the A series in July 1943, with better armour and also many improvements to the tank to improve reliability and efficiency, notably a new commanders cupola and machine gun mount in the hull. Panther A’s were especially common during the fighting in Normandy, though could be found everywhere the German army fought, and the vehicle served with both SS and Heer panzer divisions, as well as the Hermann Goring Panzer division.

No Panthers ever went to Africa, however they served in Northern Europe, Italy and on the Eastern Front, and the vehicle also saw limited post war service with the French and Romanian armies, which served with both nations for some years until replaced with more suitable designs.

The Panther in Bolt Action 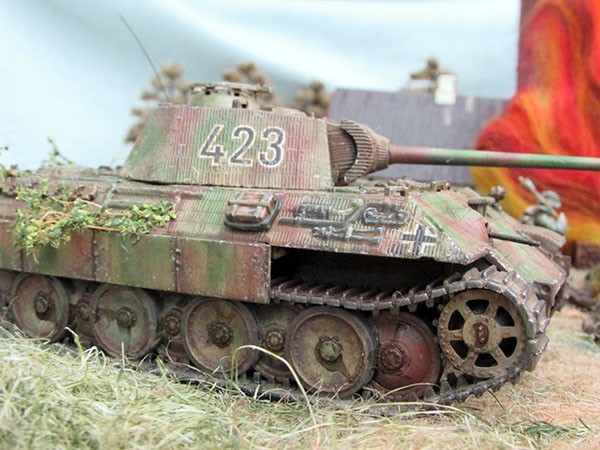 The Panther in Bolt Action falls somewhere between a medium and a heavy tank in terms of use on the board. One the one hand, from the front it has heavy armour 10+ and a super heavy anti-tank gun as armament, however from the side and rear it is treated as any other medium tank.
Additionally, the points cost of the vehicle is comparatively cheaper, where a regular Tiger costs 395 points, the Panther comes in at 355. 40 points may not seem like much, but can make all the difference in force composition and list building stages. 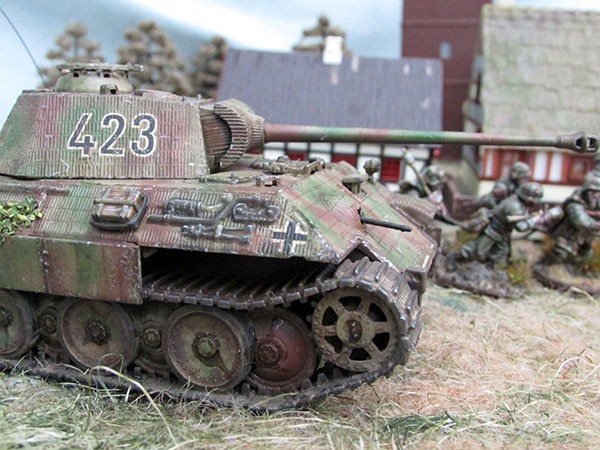 In addition to its heavy frontal armour and good gun, the Panther also has coaxial and hull MMG’s, with the super heavy anti-tank gun being able to put out a 3” template if needed too rendering the vehicle surprisingly effective against infantry too, although this is not perhaps its best use. For an additional 15 points you can fit the Panther with a pintle mounted machine gun, however using this renders the vehicle open topped… Personally It’s not an upgrade I’d take, and I’d rather put the points into something else in my force. 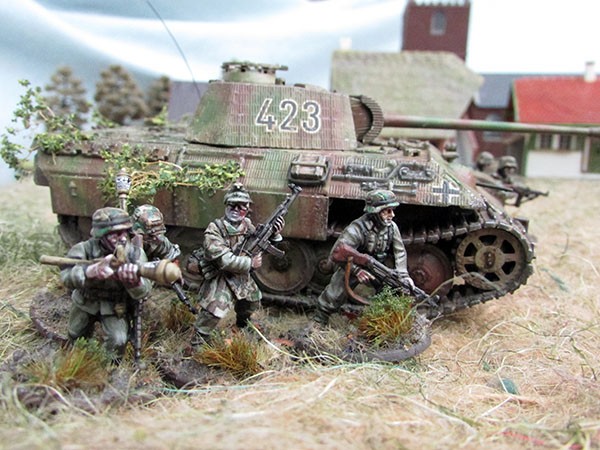 Tactically, in a conventional game of Bolt Action the Panthers effectiveness is largely dictated by terrain density, the sparser the terrain the more likely it is to have targets to hunt with its very long ranged weapons. You can be in effective range long before most of the likely opposition, and generally without moving too. If having to prowl through terrain, finding something to destroy, keep some support around the Panther, as it’s weaker sides and rear are suddenly very vulnerable, and being a large vehicle these are easily exposed too. 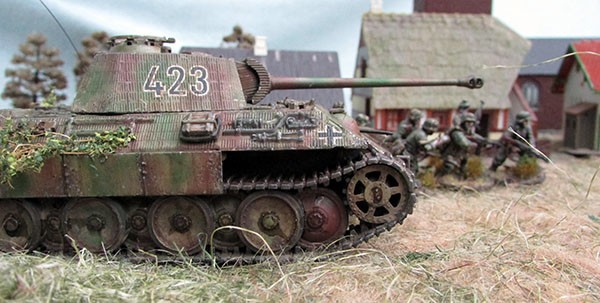 Finally, the Tiger Fear rule again plays into the Panther remaining at range, and in open terrain, as the more units that can draw line of site to it the better. Ideally, the best position for the vehicle is on an open flank, where it can position itself whilst keeping its sides safe, however the odds of this happening and your opponent allowing this to happen, are probably pretty slim…

At 355 points you’ll have to be very careful what else you add to the force when playing at the 1000 point mark, personally I tend to use regular units rather than veterans as I like the extra numbers and freedom of extra weapons that this allows, although the resilience of veterans certainly has its place in a small elite force supporting the Panther. 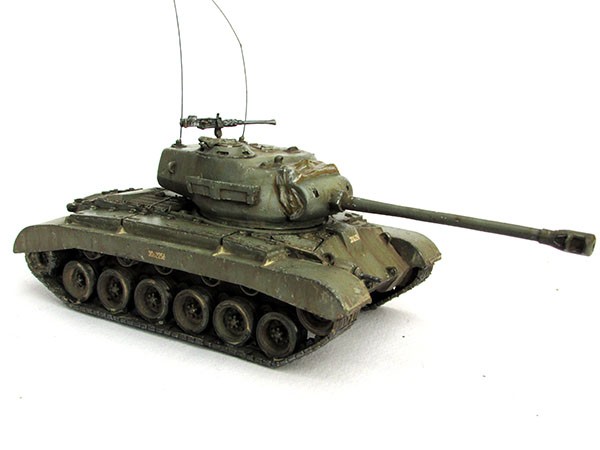 The M26 Pershing is an American medium tank weighing around 47 tons, that was both well-armed and armoured, and was among the last American vehicles to enter service during the Second World War, although it would go on to see service for many years post war. Despite this late entry to service, the development of a heavy tank with a large gun had begun even before the outbreak of war, with the universal tank concept of the late 1930’s being the distant ancestor of the Pershing. 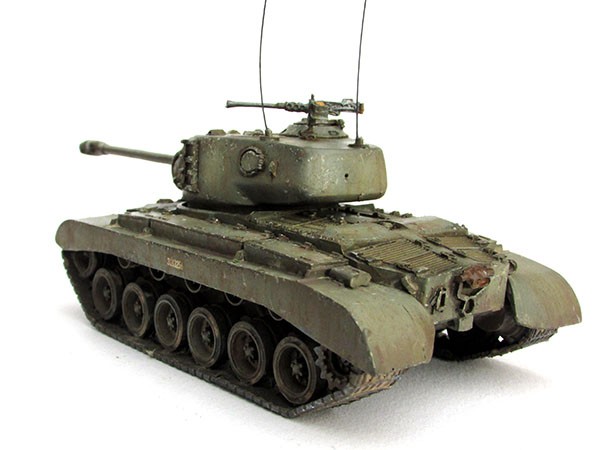 Development of the vehicle that would become the M26 began in 1942 with the T20 prototype, which was being developed as a successor to the M4 Sherman currently entering service, this design proved not to be enough of an improvement over the Sherman, and so the design was further developed in 1943 into the T23, which featured a 76mm gun and a new turret, which would also be fitted to later production Sherman tanks. These vehicles did enter service in a limited training capacity, however supply and reliability issues meant they were never deployed outside of the United States. 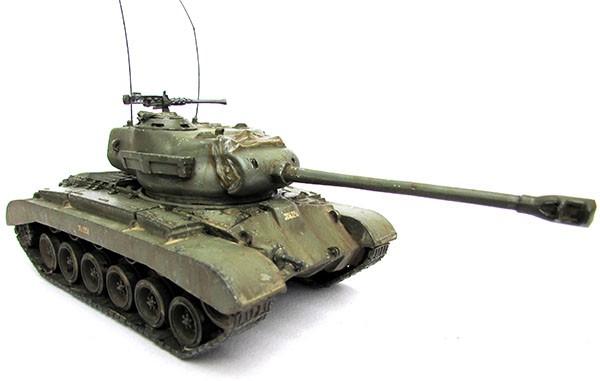 Again, this design still didn’t offer up much more than the Sherman delivered, and so by 1944 the T25 had been developed, This retained the HVSS pattern suspension of the M4 Sherman, however had 4inch thick frontal armour and a large turret armed with the M3 90mm gun. Reliability and performance capability issues meant that further refinement of the design was needed, and so a new torsion bar suspension was developed, and by early 1944 the vehicle that was to become the M26 Pershing was ready for production. 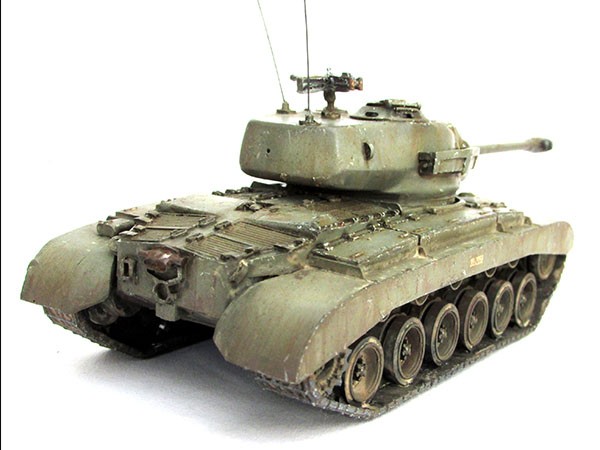 What happens next is unclear, and somewhat shrouded in mystery, as whilst the Pershing didn’t enter into service until early in 1945, it could have seen service far earlier. Some arguments state that army command were unwilling to adopt the new vehicle, citing disruption to production and logistical systems already in place, and that despite the Shermans short comings, these were not severe enough to warrant introduction of a new tank. 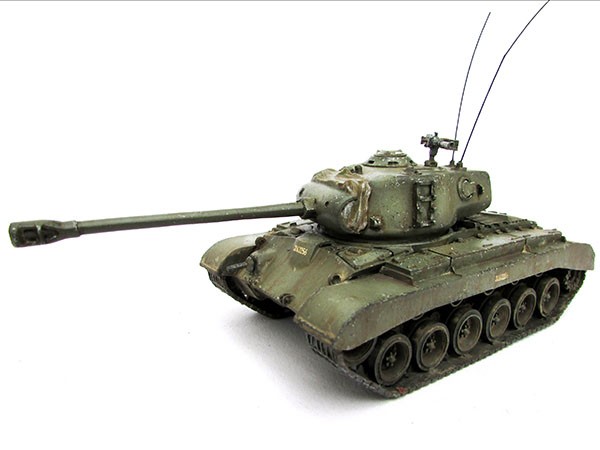 Additionally, the US tactical doctrine at the time still did not see the role of tanks being to combat other tanks, and that this was a task best suited to the tank destroyer arm, and that to have a heavily armed and armoured vehicle would be an unnecessary complication, again tying in to the logistical concerns. 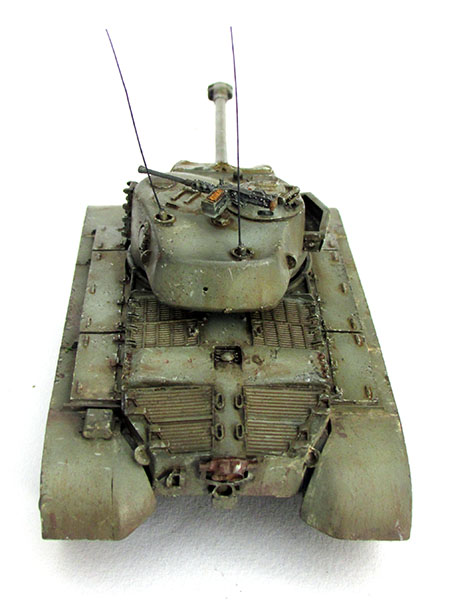 Despite these issues, the Pershing was eventually accepted into full service, and served with both the 3rd and 9th armoured divisions in the final 3 months of the war, seeing limited action, though it proved a very capable vehicle when it did face German armour. 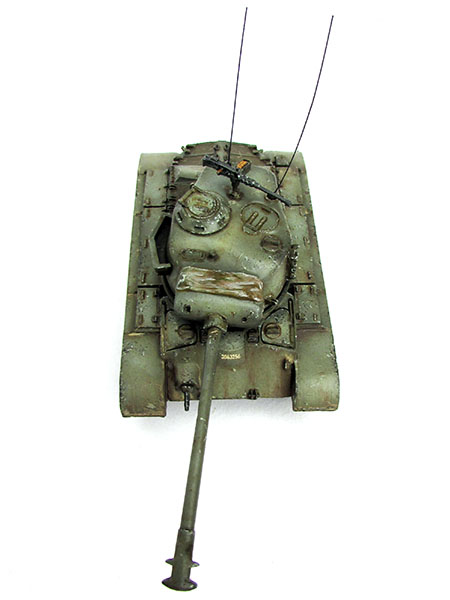 The M26 also supported the assault on the bridge at Remagen, though by the time the fighting was concluded the bridge was too damaged for these heavier tanks to cross. By 1945 around 300 vehicles had been shipped to Europe, though only a limited number of these saw action. Some vehicles may also have been shipped to Okinawa for the invasion of Japan, though these did not see action. 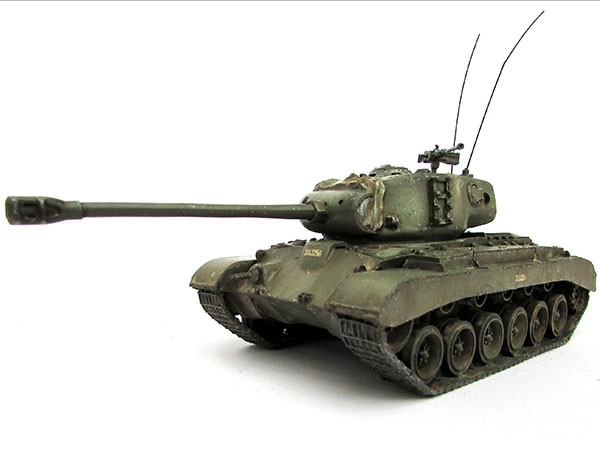 Post war, the M26 saw extensive use in the arsenals of several NATO countries, notably France, Italy and Belgium, with Italy and Belgium retaining their M26’s into the 1960s. The M26 also served with distinction in Korea, where it fought against T34/85’s and was found to be a vastly superior tank. Gradually however, the m26 was replaced by the M46, itself an updated version, of the M26, and this in turn evolved into the M47, and eventually on into the M60, all of which used similar suspension components and can trace a linear evolution to the M26, making its post war impact especially noteworthy. 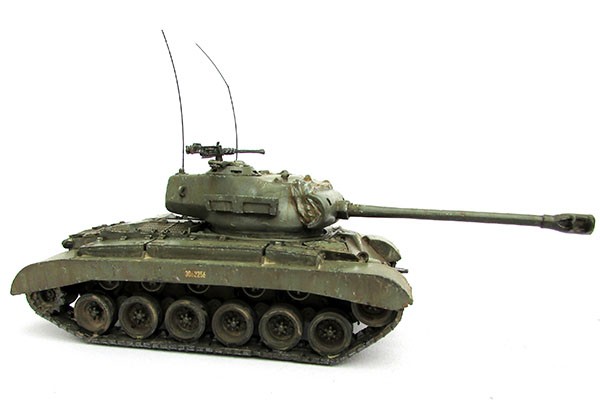 The M26 Pershing in Bolt Action 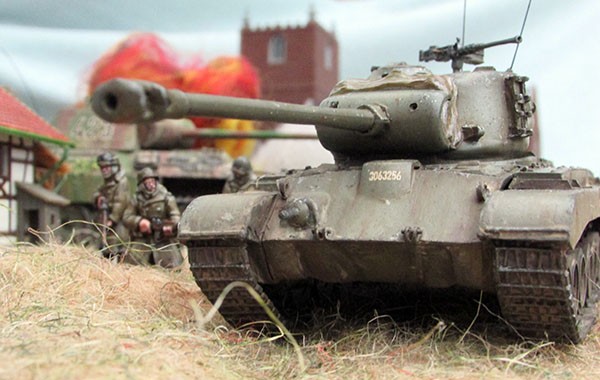 The Pershing in Bolt Action is very much the stereotypical heavy tank, featuring heavy armour 10+, a super heavy anti-tank gun, as well as both coax and hull medium machine guns, and costing 395 points at regular, and being available as inexperienced and veteran levels too. 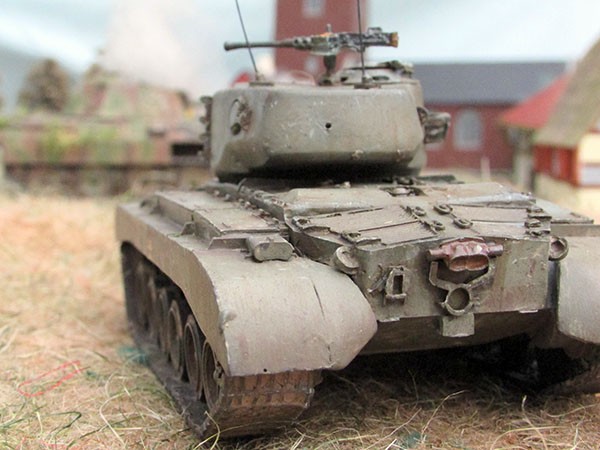 The Pershing may also have a pintle mounted HMG added for +25 points, however as with the Panther this renders the vehicle opened topped. It does mean you can put out 13 machine gun shots at long range though if you feel it’s worth the gamble of extra vulnerability, and it’s also a hefty chunk of points, and something I’d probably not use myself, though I have modelled it on as it looks good! 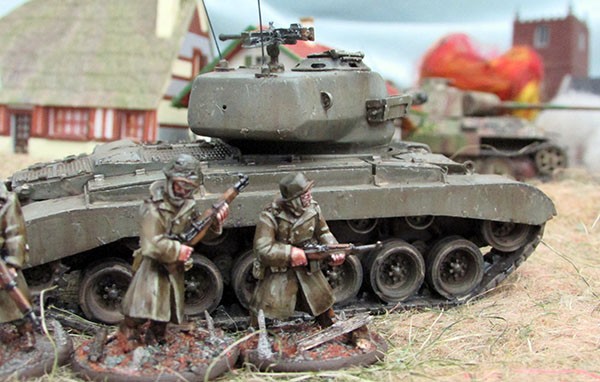 Whilst heavy tanks like the M26 are generally best used in a stationary position holding a flank, the Pershing can use gyrostabilisers when taken as veteran. This allows it to ignore the to hit modifier for moving and firing, and allows your tank to spear head an advance and act as mobile cover or aggressively hunt enemy armour. 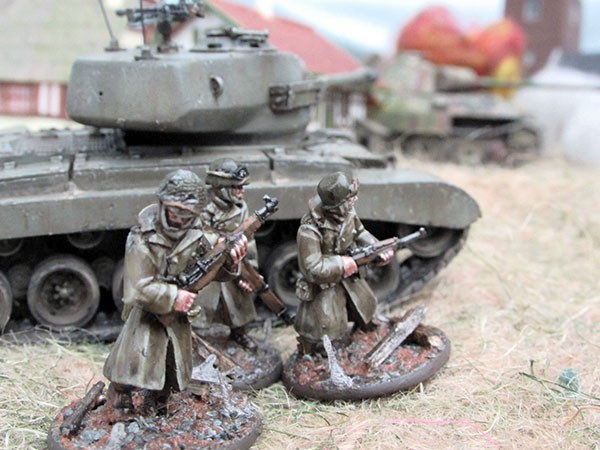 This will put the Pershing at close to 500 points however, so would perhaps be better suited to a game of tank wars, or backed up with masses of cheap infantry to surge forwards and claim the objectives, as US forces don’t suffer quite as much as other nations do when fielding inexperienced infantry due to their semi-automatic rifles allowing them to ignore the penalty for moving and firing, which also gives them a nice pairing with the aggressive M26. 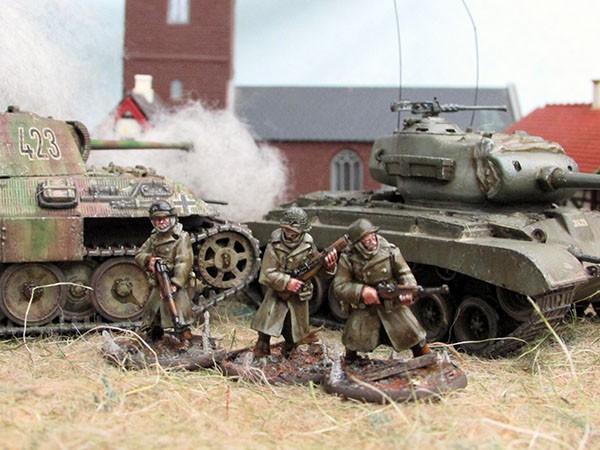 These tanks in store! 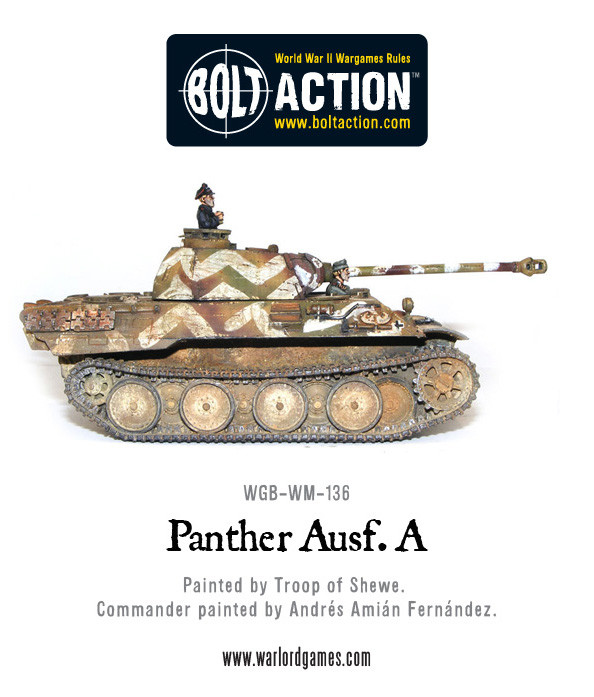 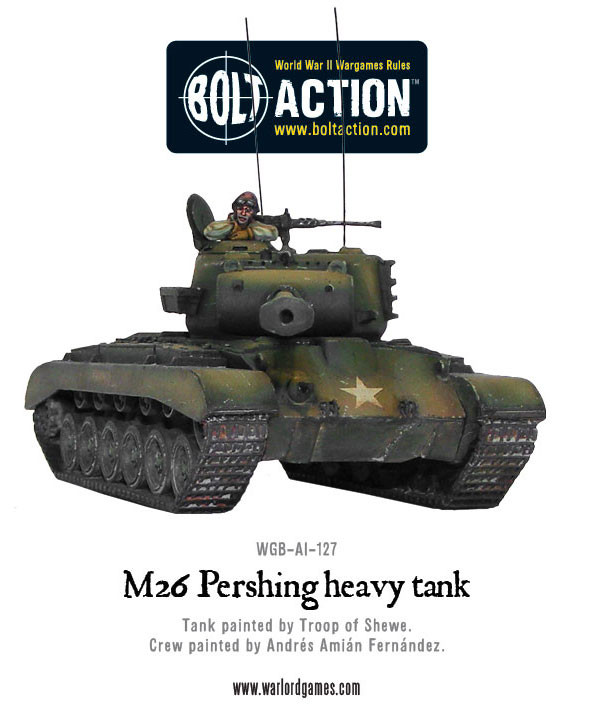