In 1940 Britain and her empire stood alone. She had to re-equip as soon as she could to take on the Axis might. Whilst excellent weapons were being churned out by Britain’s factories, local folk with the best of intentions stepped in to lend a hand, sometimes it even helped…

The Holman factory in Cornwall made compressed air machinery and developed a rather Heath Robinson device that would propel a standard mills bomb grenade up to the height of 600 feet, where hopefully it would explode scattering lethal shrapnel into attacking enemy dive bombers! 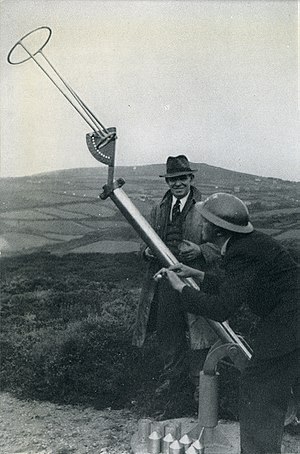 A later version used the boiler steam straight from the engine room and was even cheaper to deploy.

4500 of these crazy devices were produced and fitted to all manner of vessels, naval and merchantmen. They seemed to be a mixed blessing …yes it was comforting to have Something to fight back with, but on the other hand, what goes up… 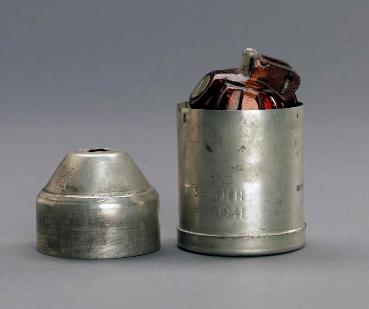 The Holman Projector Grenade and container – the container falls away after launch allowing the grenade to arm and explode with a puff of smoke and shrapnel.

There seems to be plenty of evidence of bored crews firing beer bottles and potatoes at passing friendly ships which at least gave them training opportunities, but it would seem that their best effect was to make the Luftwaffe think they had some sort of proper anti-aircraft gun on board so watch out… A good crew could shoot 30 bombs in a minute!

Did you know?
After being so disparaging about this weapon it would seem that up to 12 enemy planes may have been brought down by this device throughout the war and many other planes were driven off. The merchantman Highlander even claimed two planes shot down by Holman fire off the coast of Scotland!

The Holman Projector In Cruel Seas

This nifty little weapon won’t do a lot more than scare off your opponent and thus has the following rules:

As a standard weapon, it has a range of 10-30cm and causes 2D6 damage (no criticals). Use the regular rules for hitting the target.

A ship fitted with a Holman Projector can opt to fire out of sequence whenever overflown by attacking aircraft. Just after all other flak has been fired, 1D10 is thrown, a hit scored on 1 and will mean the plane is so spooked that he will turn for home. Even if the result was not a 1, the plane will have an additional -1 to its To Hit roll.

However, on a roll of a 10, any single ship within 30 cm of the projector and under the aircraft’s flight path will take damage from the falling missile & debris, immediately roll D6 damage (no critical).

The Japanese navy had a similar device using a mortar barrel if you wish to equip your vessel just count it as a Holman for effect and cost. 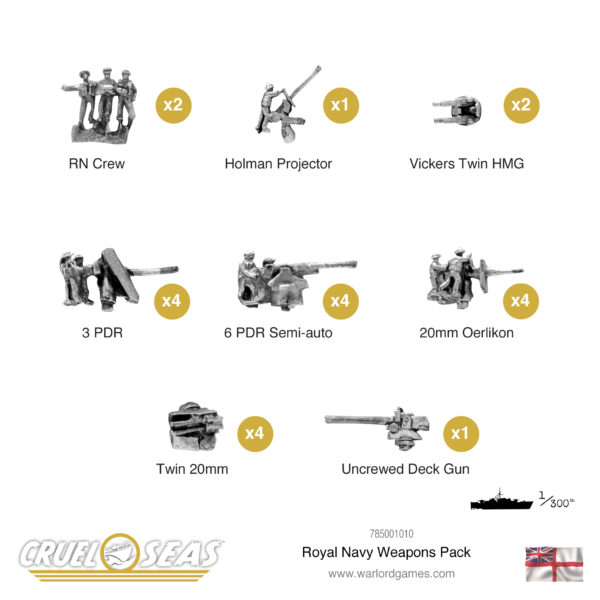