In part 2 of our series on collecting our Pacific armies we are taking our forces up to to 500 points, with the knowledge that we will be playing a four player game with these armies. So without further ado let’s see what’s been painted this week. 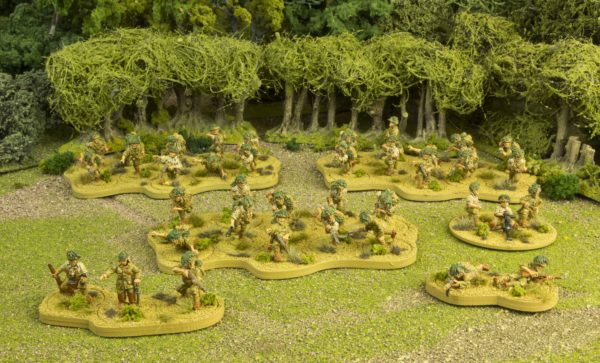 Ches: It didn’t take long for me to decide what I wanted to add to my force to get it up to 500 points. I wanted it to look like a good representation of an actual platoon so more infantry would be needed. Another 10 guys would do the trick, 2 of which would split off and form a sniper team.

I also wanted to upgrade my starting units. The two 10 man squads would both get an LMG. This would help me put down a serious amount of fire to keep the US army at bay.

To that end my last addition was an MMG team. The extra dice in the bag would help in the game and obviously more firepower is never a bad thing. Now all that was left to do was to get a time and place sorted to play our first game! 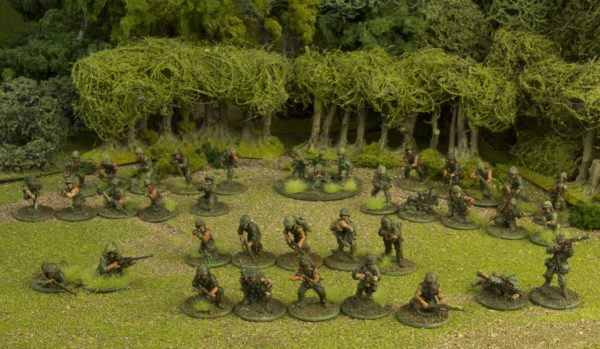 Bill: After my initial write up I decided the best way to add to my force was to include more infantry units rather than adding armour at this stage. I chose an additional 10 man marine squad with only one Thompson like the other squads.

I have read that the marines adopted a fire and move tactics to besiege the Japanese islands with teams laying down heavy fire whilst others moved into better positions to repeat the process. To try and replicate this I added a .50 cal HMG team – surely enough to stop all but the toughest of enemies I would face.

I then wanted a unit with the potential to cause a devastating result so I chose a sniper team, picking off an enemy NCO or even the LMG in a squad would mean a lot at this level. In 500 points every casualty counts! 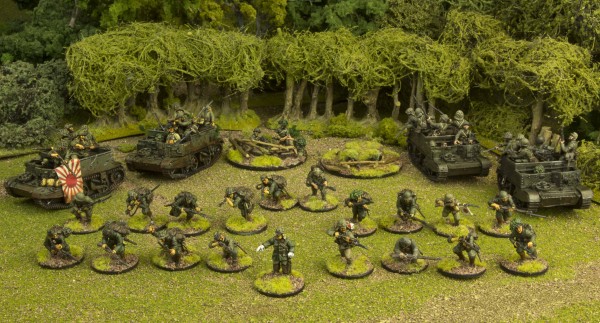 Daz: To five hundred and beyond!

Knowing I’d danced loosely over the mark last round I decided two things. 1) Read the rules and 2) stay within the lines. First was to reinforce the grenadier platoon with five more chaps and another mortar in their borrowed transport at 75pts.

To give a little bit of pinning prowess and to pick off those pesky flamethrower units I plumped for a sniper team at 50pts. Giving me 125pts left, looking at my current force I’m a little light on hitting power and given the theme of my raiding force a heavy tank would be out of place.

A flamethrower of my own would put pay to anyone severely dug in and a machine gun team would help rack up the pin markers on the enemy. Now, where are my loaded dice (kidding!)… 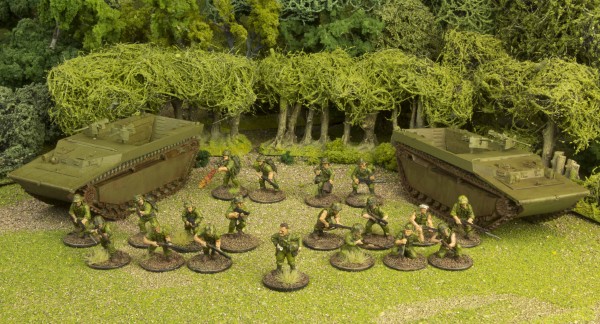 Richard: As mentioned in the previous stage, I want to utilise as many of the iconic pieces of equipment used in the Pacific campaign as possible – and now that we’re at 500pts, I can afford a few more toys.

With my additional 250pts allowance, I’ve drafted-in some of my favourite AFVs – the LVT Buffalo. With those evocative scenes from countless movies and documentaries, of great fleets of LVTs coming ashore, I knew I had to include them in my army – and with a large transport capacity, and a pair of MMGs – you can’t go far wrong.

To round-off this stage of the project, I’ve chosen an MMG team – the ubiquitous 30cal, paying homage to USMC hero, Gunnery Sergeant John Basilone. When I first saw the miniature that we produce to represent gunner from the USMC 30 cal MMG Team Redeploying, it immediately reminded me of Basilone grabbing hold of the white-hot barrel of his Browning machine gun and lugging it from position-to-position – another iconic image from the Pacific campaign.

The gloves are off as all out warfare is declared. We’ll take you blow by blow through our first battle with our newly created forces!