An Introduction to ‘Duel in the Sun’

Alessio Cavatore introduces us to ‘Duel in the Sun’ – available to order today!

The initial series of supplements for Bolt Action (i.e. the “Armies of…” books) has ended with the Italy and the Axis book. After the unique and self-contained Tank War supplement, we are now publishing a new series – which we refer to as “Theatre books”. The first one was Battleground Europe, then Ostfront, then Germany Strikes, then Empires in Flames and last but not least the soon to be released Bolt Action: Duel in the Sun, the African and Italian campaigns. In this article I’m going to explain in a little more detail what you’re going to find in each section of this new book.

The first section of the book concentrates on the early stages of the war in North and East Africa. Introducing additional/alternative rules for Italian, French and British forces in those theatres, as well as unique terrain special rules. Also in there you will find several scenarios to fight operation Compass and daring small-scale raids by the Free French and Long Range Desert Group. Additional units are introduced like camelry (!) and rules to field an Indian Division reinforced platoon.

This second section depicts the bitter fighting in the mud-logged ravines of Greece and then the fall back of the Allied forces onto Crete, to finish with the massive German airborne assault on the island. Scenarios and additional rules to recreate the battles of operation Marita and operation Mercury – specifically the battle of Tempe gorge in Greece and the assault on Maleme airfield on Crete. Included rules for Maori infantry sections (and hard-as-nails NZ Cpt Charles Upham!) as well as a complete German Fallschirmjӓger reinforced platoon! The Axis players should enjoy complete air superiority possibly for the last time on the Western front.

Duel in the Desert 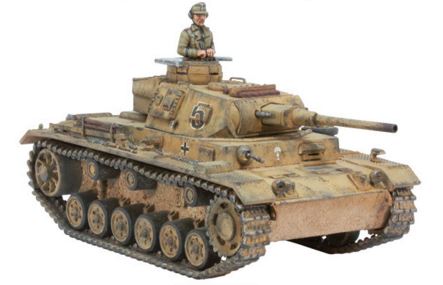 This is, I believe, the ‘core’ of the book, focusing on the alternating fortunes of the Afrika Korps and its Italian allies against the 8th Army with all of its mixed nationalities from both Europe and the Commonwealth fighting together. Operation Sunflower, the siege and fall of Tobruk, operation Crusader, operation Theseus, and finally the decisive battles at El Alamein that, in Churchill words, might not have been the beginning of the end, but certainly were the end of the beginning.
Rules for Rommel’s command, night fighting, minefields, limited supply etc. will allow you fight either static battles like the ‘siege of Tobruk’ scenario and dynamic ones like skirmish in the sand or Operation Lightfoot. In terms of additional units, the most exciting are certainly the SAS infantry sections (including rules for Paddy Maine!) on the Allied side, and the Ramcke Brigade (led by Ramcke himself!) on the Axis side. 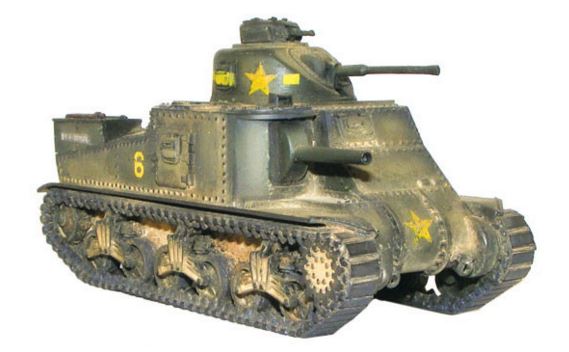 The US enter the war! This section deals with Operation Torch, from the first rehearsal of an amphibious landing against an enemy held coast with the invasion of Vichy France held western African territories to the steep learning curve of the Americans as they faced the battle-hardened Axis forces in Tunisia – Kasserine pass, El Guettar, Longstop Hill… a series of scenarios where the Allied forces fighting their way to Tunis will have a taste of what expects them in the broken, mountainous terrain of Italy. Also, the rules for the Hermann Goring division, both in its African campaign and then its Italian campaign incarnations.

Starting with operation Husky, play through the invasion of Sicily, and then Avalanche into mainland Italy, the fighting in Salerno, Anzio, against the Gustav and Gothic lines, the bitter struggles at Monte Cassino and the remorseless resistance war in the North of the peninsula. Fight with American or British forces as they race up the Italian peninsula against the stiff German defense. Rules for veteran US infantry, late war Italian paratroopers, as well as characters such as Mad Jack Churchill, Otto Skorzeny, Charles ‘Commando’ Kelly and Dan Inouye. Importantly, in this chapter are guidelines about how to collect Italian forces after the surrender of the Italian Kingdom – choose to field either Allied-equipped Italian troops on the Allied side, Repubblica Sociale troops alongside the Germans, or Italian partisan armies.

This appendix collects generic rules for minefields, both airborne and amphibious assaults and night fighting, as well as new rules that are far more specific to this sector, like multinational forces and desert warfare (both terrain and environmental effects).

And to conclude, here’s a message from the book’s author:

Having visited the edge of Egypt’s western desert region, I find it difficult to fathom how, over seventy years ago, thousands of men endured many interminable months of warfare in such inhospitable conditions. That they were prepared to fight on, regardless of the endless sand and the pitiless heat, is a sure testament to human bravery and resilience.
On a slightly different topic, one opportunity I could not miss after writing this supplement was converting a unit of British Somaliland Camel Corps for the early war in East Africa. I’m hoping that although they won’t get much use on the table top, every owner of this supplement will have a camelry unit as one of the centre-pieces of their Bolt Action collection.
Thanks to Alessio Cavatore for giving me the opportunity to work on Duel in the Sun, and to everyone at Warlord and Osprey for the marvellous job they’ve done at producing the beautiful book you’re now holding.

Thanks Dylan, and thank you guys for reading – enjoy your battles around the Med.
Alessio

Order your copy and get your FREE special figure of Sydney ‘Digger’ Robinson today: 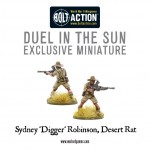 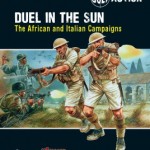 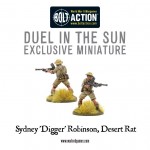