We previously featured a brief history of the US Army’s 100th Battalion and 442nd Regimental Combat Team, from writer Robert Morrison. You can read that article here. This time, he provides new rules for using the illustrious and highly decorated Nisei in your games of Bolt Action.

Once attached to the 133rd Regimental Combat Team, the 100th Infantry would have access to their support assets, however due to the mountainous terrain which they fought through in Southern Italy, only the lightest weapons found use and even transport assets were useless. Some historians have noted that the American troops had to contend with terrain that was too difficult even to use pack mules. Further, because the 100th had its own integrated mortar assets, they were able to deploy greater numbers in support of smaller groups. To reflect these assets and limitations, a 100th Infantry Battalion force should use the following selector:

The platoon cannot include an Air Observer. On the other hand, all infantry units have the Initiative Training army special rule from Armies of Germany to represent the extensive leadership training the 100th undertook, and any infantry unit may be given the Stubborn special rule for +1 pt per man.

The 100th Infantry was lacking typical regimental assets and fought most of the Italian campaign without support, but at Lanuvio they were supplemented by forces from 34 Division for Task Force Singles. Further, they were well-trained and extremely determined soldiers, but fought almost exclusively on foot due to the rugged terrain in southern Italy. To represent such a force, use the following theatre selector:

The platoon cannot include an Air Observer. On the other hand, all infantry units have the Initiative Training army special rule from Armies of Germany to represent the extensive leadership training the 100th undertook, and any infantry unit may be given the Stubborn special rule for +1 pt per man. 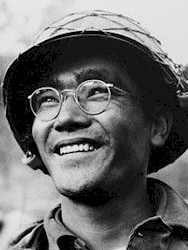 Private Awakuni was the first member of the 100th to score a vehicle kill, destroying a German recon car at extreme range in the early days of their march through Southern Italy. He built on this reputation as a “Tankbuster” while fighting at Cassino, where he advanced alone under heavy fire to destroy a German assault gun. 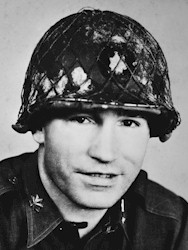 Major Lovell trained with the One-Puka-Puka from day one and was well loved by the men under his command. Further, he took great pride in his men and readily defended their names against any who would talk ill of the Japanese-Americans. 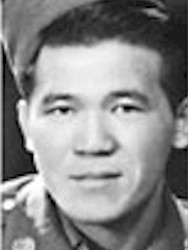 Hiroshi Yasotake proved to be more than your average BAR gunner during the breakout from Anzio. Here he single-handedly captured a German gun nest and covered his squad’s flank by firing down on advancing German soldiers. He then engaged in a duel with a German machine gun nest over 700 feet away, eventually winning the day.

Team: He is not a team in himself, but any one team that has the option of upgrading a rifleman to a BAR gunner for +5 pts may instead upgrade the rifleman to PFC Hiroshi Yasotake for +15 pts.

The Battle of Sant Angelo d’Alife was a prime example of the type of fighting the 100th Infantry engaged in before Monte Cassino. Due to the mountainous terrain, which the German defenders used to their advantage, American units had limited access to heavy support and had to fight against well-fortified positions.

The German defenders may set up half of their force within 12” of their table edge, which should feature fortified farm houses and dug in positions. These units are hidden. The remaining German forces are hidden in the farmhouses spread about the table. To reflect this, the German player secretly records which farmhouses units are deployed in. The German player may deploy his minefield anywhere in the farm fields.

The American attacker sets up at least half their units within 12” of their own table edge, with those not set up at the beginning being held back in reserve.

Limited Visibility:
Because the assault takes place at night and the Americans have no aerial recon to rely on, those German units hiding in Farmhouses are placed on the table until an American unit ends its move within 6”. At that point the German player may deploy as many farmhouse units as he would like.

Objective
The attacker is attempting to capture the valley, while the German forces are trying to halt the advance.

Victory!
At the end of the game, calculate which side has won by adding up victory points as follows. If one side scores at least 2 more points than the other, then that side has won a clear victory. Otherwise, the result is a draw!

Captain Young Oak Kim’s daring recon raid to capture German soldiers for intelligence is the stuff of legend. Five lightly armed Nisei snuck of the Anzio beachhead, past enemy frontline outposts and into the rearguard using nothing more than wheat fields and drainage ditches for cover. Once there, they took two prisoners at gunpoint and snuck back to their own lines, risking capture and death at every turn. This scenario is meant to be a quick skirmish, either as a warm-up before the main event or for when time is limited and you still want to get in a game of Bolt Action.

Opposing Forces
This scenario is played between a squad of German soldiers and a squad of Americans. Each side may pick a single Infantry squad, with the Germans choosing from those available in the 1943-44 Defence of Italy selector in the Armies of Germany book and the Americans choosing from the 100th Infantry Battalion reinforced platoon selector.

Set-up
In this scenario, the Americans are trying to infiltrate the German camp to capture prisoners for interrogation. The scenario should only a 4’ x 4’ table (or half of an 8’ x 4’ table) The terrain should consist of low cover, such as fields of wheat, ditches and low walls.

The German players may deploy their models anywhere on their sector of the table. The American player must deploy all their models from their table edge but start hidden.

Special Rules
Rear Areas:
Because the action takes place behind the front lines, units are not maintaining strict discipline. As such, they are not required to remain within 1” of another model in their unit.

Limited Visibility:
Due to the nature of the terrain, as long as the Americans do not execute a run order, the Germans will not spot them further away than 6”. If a German unit moves within 6” of an American model, that model is immediately revealed and can be fired upon by other Germans. However, if an American model can move within 3” of a German without being spotted, that German model is considered captured. The models move together as a team but can no longer shoot.

Objective
The attacker is attempting to capture troops for intelligence, the defender is patrolling their rear areas.

Game Duration
The game ends when either the Americans return to their table edge or are wiped out.

Victory!
If the Americans return to their table edge with a German prisoner they win, if the Americans are wiped out, the Germans win. Any other circumstance is considered a tie.

The Nisei in Bolt Action

The Nisei – 442nd Regimental Combat Team is now available for Pre-Order in our webstore. Replicate the daring actions of this most decorated fighting force in the Italian Campaigns on the tabletop. If you try out any of the above characters, theatre selectors, or scenarios, be sure to let us know what you think! 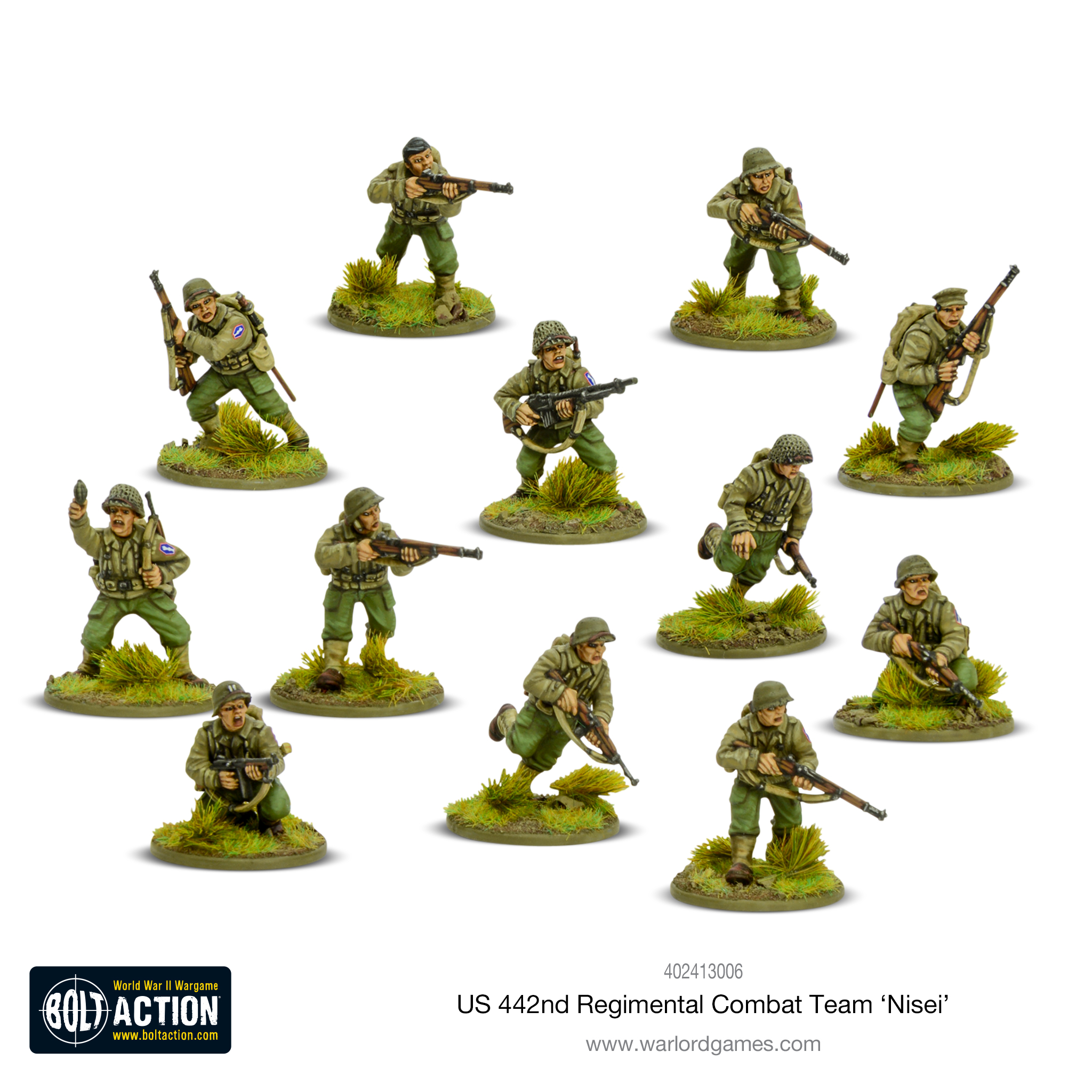 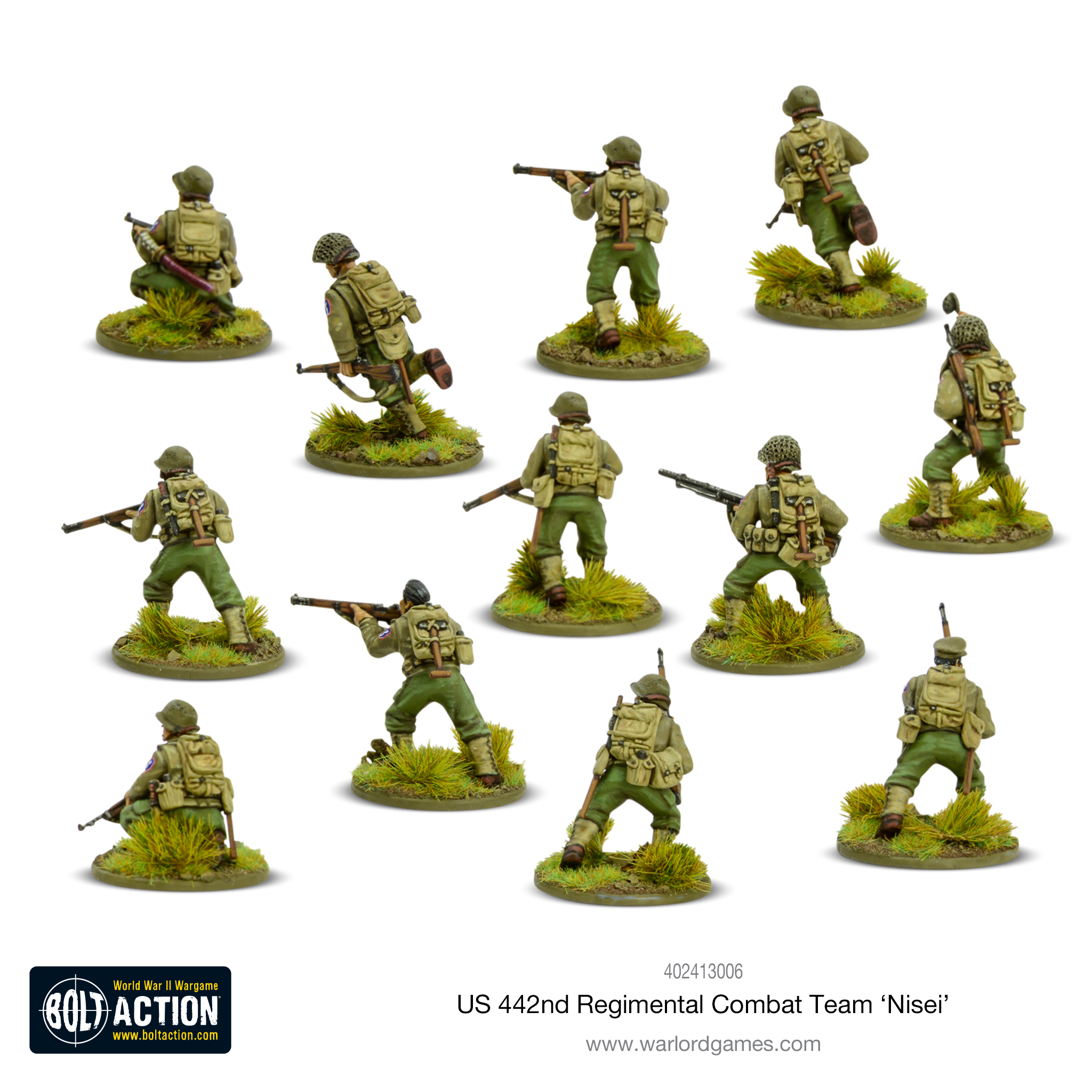 Dan can often be found contemplating the mound of unpainted minis building up under his desk. He has a tendency to roll lots of ones. He also has a tendency to complain about rolling lots of ones.
View Profile | View all posts by Dan Hewitson
Victory at Sea: Battle of the Komandorski Islands
Canines of War: Dogs throughout Military History