Algoryn, Beyond the Gates of Antares, Community

“The Concord forces were shattered, a lone soldier the only survivor, pinned by the degenerate Isorians, who themselves were unable to advance past Bartok’s forces, even as his glory squad fell back from the Tsan-Ra.
The Ghar commander grinned malevolently, as they had bled the Isorians, annihilated the Concord and smashed the drone both degenerate forces had coveted, with the only casualties coming from the weak, timid and ultimately expendable outcasts.
Whilst he and his Immortals had technically fled, no other knew of that truth, and by the time the battle had been reported to high command, the story of the battle would be suitably manipulated to serve the advancement of Bartok Vul, a tactic he would repeat as often as he was able whilst stuck on the hellish Defor, and after, until the vicious Ghar warolrd was as renowned as Karg, or even the traitor Fartok, before his fall from grace.”

So, the second month already! time truly flies! This month the assigned task was to assemble, start painting (or start AND finish painting if you possess Asher’s superpowers!) and play with our forces, and in true Noise Sector style we charged in loudly and proudly, and my Ghar have become as individual as I had hoped when I first envisioned the force.

When it comes to the building, painting and gaming with toy soldiers that is our hobby, I find myself most drawn to the building stage, the posing, twisting and manipulating the models until they fit some story i’ve dreamed up, and this was no exception.

The battlesuit models, being multi part plastic models offered me a vast sea of options and poses, even the option to (with some slight pushing and twisting) create a battlesuit in the process of falling sideways, no doubt struck by some gust of hellish wind! 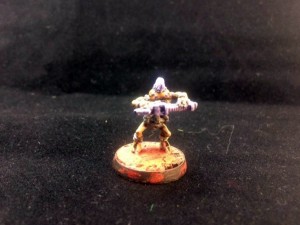 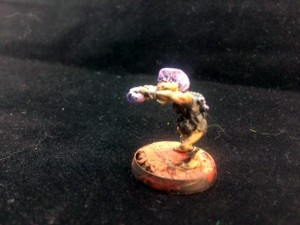 In contrast, the Outcasts, for the most part single pose metal models offered less choice, but again, with some bending and a touch of clipping and re gluing, still offer enough variety to ensure that almost no squad has two of the same models! 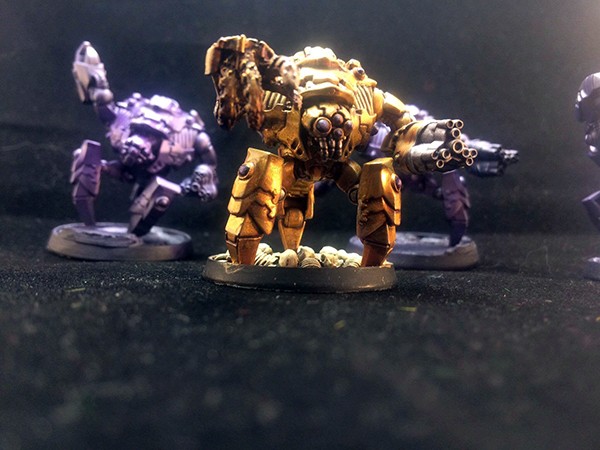 Of conversions, my favourite is Bartuk Vul himself, I wanted to change his claw to something a little more unique, and I turned to the House of War’s resident 3d printing wizard Riordan, and I soon had a 3d printed hand now pointing out the next target for the Immortals to drown in scourer cannon fire.

Since Defor is a hellish, acid and tar covered planet, and the outcasts are poorly equipped and their betters would hardly care enough about their welfare, I took up some greenstuff and a sculpting tool I gave my poor downtrodden masses in the large squad, with my favorites being the outcast missing an eye, and the one with half his mouth eaten away. 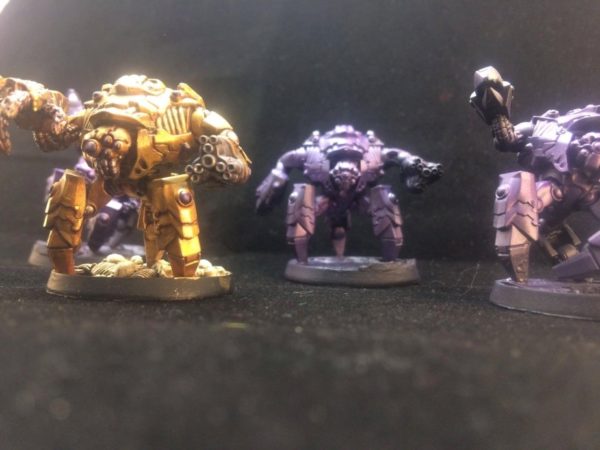 In terms of colour the only model I had a concrete idea for was Barduk Vul, an ostentatious bright gold Suit with Purple lighting, which in turn led me to look to Red, White or Purple as complementary colours to suit the gold, in the end, once Dan had showed me some metallic Purple paints, my mind was set and Purple became the Armour colour of my suits, and I extended it to the Outcasts as a spot colour, to better tie the force together.

With forces built, it was time to let loose the fury of battle and turn the sands of Defor an even darker shade of red.

First up was a game against Mitch’s Isorians in the ‘Hold the Line’ scenario, with my Ghar as the attackers.
Combat began with my whole army facing a single phase squad and the dreaded phase sniper, both with ambush orders, though some miraculous rolling on the sonic bombardment saw the phase squad down to half strength down and the sniper down, both and heavily pinned.
By the fourth turn however, My six man outcast squad had spent most of the game pinned, The phase sniper had reduced the large outcast squad by five outcasts each turn, and my Battlesuit squad fled, leaving me with no troops and Mitch on all objectives, a thorough defeat for my Ghar.

In this and the games after it, I’ve found small games of Antares are affairs of both chance and memorable moments, fate and fortune changing on the roll of a single die, or a string of lucky draws from the dice bag.
With so few order dice, every die you have is a precious resource, and every enemy die a high value target (although with a Block! In your arsenal, having less dice than your opponent can be a good thing when the distort die comes up)
as such, I look forward to expanding our armies and tearing our new playground asunder with the thunder of guns and the catastrophic explosions of plasma generators.

Check out their month 2 antics in these 3 articles, a Podcast, with updates over on their Facebook page:

Beyond the Gates of Antares594 Noise Sector3 The Antares Initiative23