And so it was that the freeborn shard confirmed my sneaking suspicious, that handsome dastard, Andy Hobday had in fact assigned both Australian groups to Defor, the planet which is basically space Australia entirely on purpose. Scoured by sulphurous winds and pockmarked with tar seas, erupting geysers of fire, mysterious crystalline entities and no water to be found anywhere, Defor is basically home, but slightly safer because of the lack of Drop Bears.

Naturally my immediate thoughts were the modelling opportunities that that this planet would provide me with. Having recently painted an army for another system that was fighting on a desert world, I had some ideas of where I was going to go. The first port of call was weathering. Fighting on Defor any unit would have a hell of a time, trudging through tar, being lashed by dust storms, their equipment would be dusty and worn. Of course, this was putting the cart well before the horse, as I hadn’t even received my army yet!

So I wait patiently, dreaming of battleworn, dust scarred weary warriors, fighting to protect the Prosperate.

Finally, the glorious day arrived! A package crammed with goodness arrived from warlord games! After a frenzy of unpackaging and stuck fingers, I had my 500 points of brave Algoryn assembled. 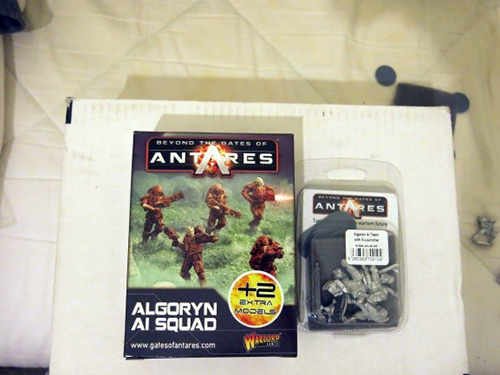 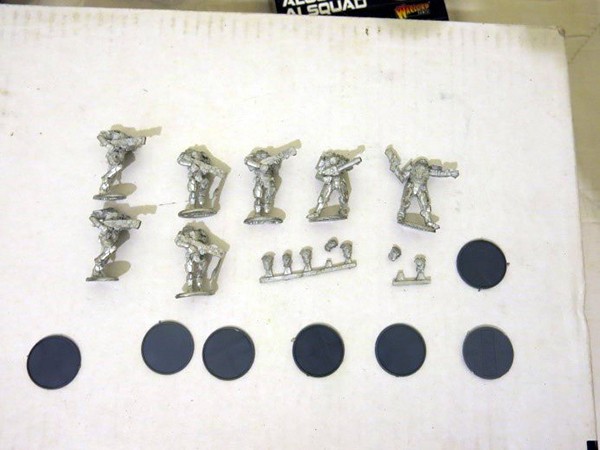 My initial impressions of the models were very positive. The casts were clean and crisp, showing much better detail than the photos can sometimes show. I found that there was a lot of detail on the models that had been lost in the muted maroon colours, like the grenades and other pouches at the waist and the various ribbing and detailing of the armour as well as the visors and the crests. There was minimal flash and miscasting and the only issues I had on that front were easily resolved with a couple of minutes and a file or sharp hobby knife.

Of the models that were multipart, I found they went together very easily, despite not being pegged and didn’t even require pinning which was a present surprise. The only issue I have with the models is the tabs on the bases which, while helpful for attaching them to the bases provided, heavily restricts the opportunity for exciting base work or mounting the models on resin bases, which is a pretty common choice these days.

I restricted myself to minimal conversions as my plan for showing weathering was mainly down to the paint job. I cut up and reposed one of the AI squad leaders to add a bit of diversity as models with the same poses bugs me, especially for prominent models like squad leaders. The other chance I made was to sculpt rebreathers for the troopers who were not wearing helmets. Obviously, the Drop Capsules came down hard and some of their equipment was damaged, so the stoic troopers have had to fight on sans helmets, donning respirators to keep themselves alive. Algoryn might be tough mudders and radiation resistant to boot, but breathing sulphur is bad for one’s health. 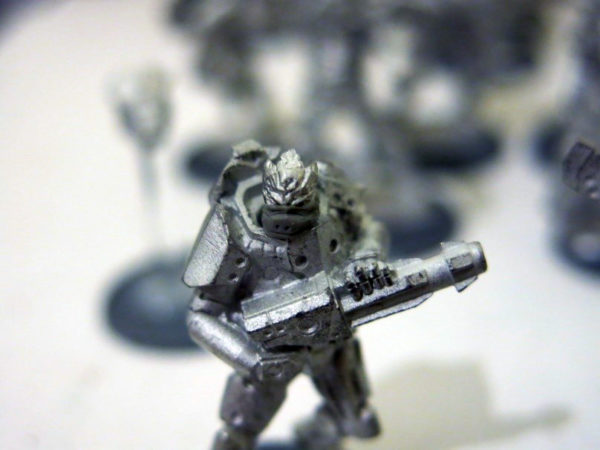 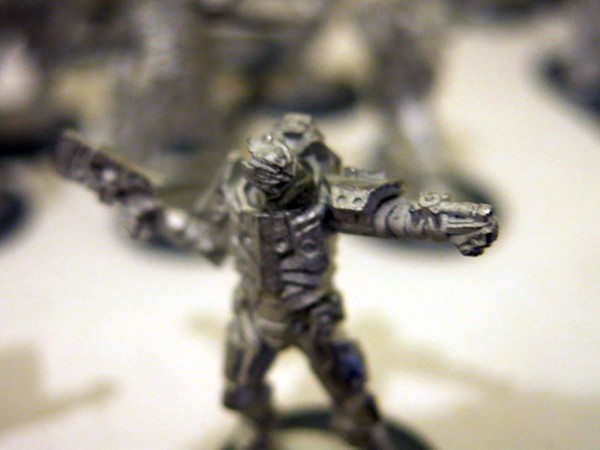 The Colours of Honour.

For the paint scheme I had initially been planning on going for the traditional red, though much brighter and vibrant, but being assigned to Defor neatly torpedoed that idea. While red armour in a red desert might make sense from a camo perspective, visual camo probably means nothing in Antarean space, swarming as it is with scout probes and nano-clouds.

Therefore, I decided to go for blue, which seems to be a fairly common choice for Algoryn commanders. I decided to break from the pack and go for a more muted blue-grey, which I felt, would match the sombre and determined personalities of the troops that would be wearing the armour. I snagged a couple of Vallejo Model Air colours and was so happy with my first test, that I immediately sprayed my entire army! 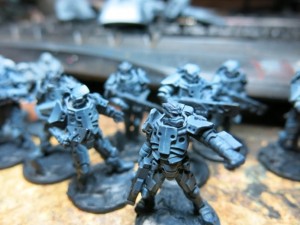 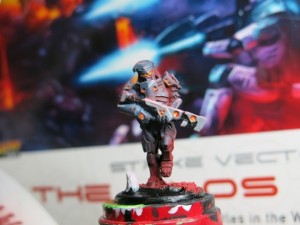 With the main armour colour sorted, I decided that the scheme needed some bright spot colours to make the model more visually interesting. I’d seem a couple of schemes with different colours guns, so I decided to do the mag weapons in a monochromatic black and light grey, which would stand out from the armour, while not stealing attention away. I also did the crests in the same grey/white and added slash marks to the armour as squad markings.

The AI squads have a single set of slashes running diagonally from the top or bottom of armour plates, with the number of slashes indicating squad number. The Assault squad got fang-like slashes to indicate their aggressive role and the Support Team and Probes got simpler geometric designed to indicate their support role.

Then it was time for weathering. Armed with two different wreathing powders. I liberally attacked the models with both powders to make them look absolutely filthy, as if they had been trekking across the surface of Defor for days, constantly assaulted by dust storms. 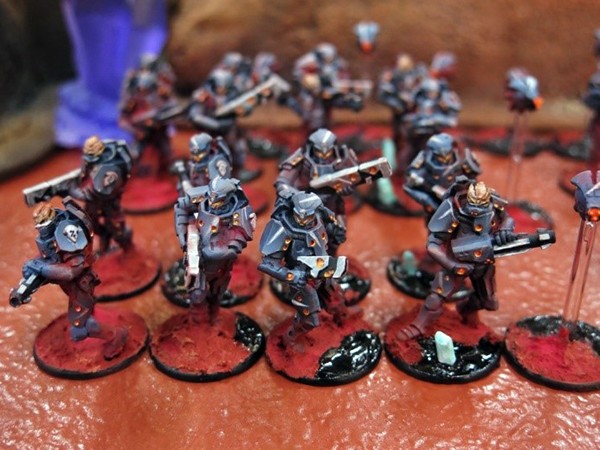 The final touch was lighting. The model was looking good, but still a bit drab so it needed to be brightened up. I did this by adding a bunch of lights across the surface of the armour and the weapon. I did these a nice fiery yellow/orange that was different enough from the weathering powder to stand out. I was really chuffed as I imagined the Algoryn advancing through the dust storm, lightings flickering in the distance.

Having completed the army paint wise, it was time to decide who they were and why they were on Defore. And thus was born the Algoryn Defor Expeditionary Force, the ADEF for short. I decided to keep my background short and modest;

“While Defore has long been known to the Algoryn, it had been considered of minimal strategic value and only the recent destruction of an invading Vorl fleet by the native Deforans has brought it to the attention of the High Council. While previously the Council had though nothing of allowing the C3 to establish contact with the natives, clearly they could not be allowed to possess such a weapon uncontested. And so it was decided to despatch a small scouting force to Defor to make contact with the natives, ‘liberate’ them from the oppression that the C3 was so obviously inflicting on them and secure their weaponary for use against all enemies. Little did the Council know that this recent event had also attracted the interest of the Isorian Shard and a nearby Ghar battlegroup. And so the stage was set for a four way struggle for the control of Defor.” 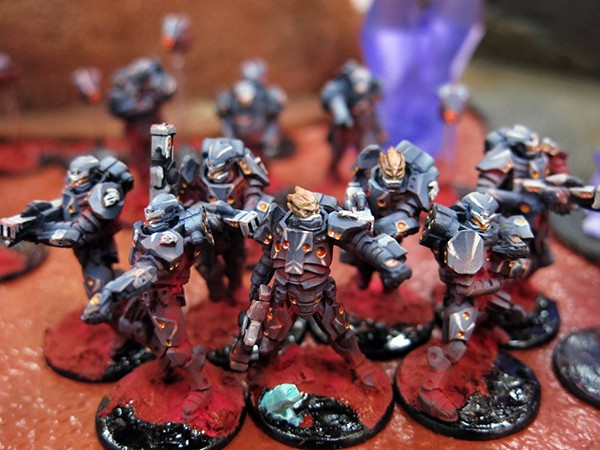 The ADEF is led by Kuran Tor, an Assault Leader considered reckless and brash even by the aggressive standards of the AI Assault Corp. He has been given a brevet promotion to commander and assigned the command of this small strike force. Defor will be his crucible. Either his aggression and determination will prove successful and he will secure a vital ally for the Algoryn in the wars to come, or his brashness will prove his undoing and the High Council will be spared the potential cost of his mistakes at a later date. This callousness may be considered distasteful to other panhuman species, but Algoryn has no space for compassion in their fight for survival against their three powerful neighbours.

Tel Hellas, a stolid dependable leader who has fought alongside Kuran Tor for years, leads AI Squad One. His squad has earned the honorific “The Implacables” for their determination in the face of enemy fire and their tenacity in completing the mission no matter the odds.

AI Squad Two is led by Par Ronek, a newly promoted leader who has yet to be tempered by war. He may lack the experience of the other leaders but has proved a quick learner on his first campaign and his fresh troops have racked up a kill tally that has impressed even the veteran Kuran Tor.

The DEF has already won several engagements against the C3 on Defor, with Kuran Tor leading from the front, punching a hole in enemy lines to allow Tel Hellas to secure the objectives as Par Ronek and his men provide decisive fire support.

Check out their month 2 antics in these 3 articles, a Podcast, with updates over on their Facebook page:

0
Beyond the Gates of Antares594 Noise Sector3 The Antares Initiative23