We’ve got some incredibly talented contributors sharing work with us. This week, we’re featuring Luis García Balaguer’s fantastic diorama of the Scots Greys at Waterloo.

The Scots Greys at Waterloo

Just as I was pushing one of our men back into the ranks I saw him fall at my feet from a sabre slash. I turned round instantly – to see English cavalry forcing their way into our midst and hacking us to pieces. Just as it is difficult, if not impossible, for the best cavalry to break into infantry who are formed into squares and who defend themselves with coolness and daring, so it is true that once the ranks have been penetrated, then resistance is useless and nothing remains for the cavalry to do but to slaughter at almost no risk to themselves. This what happened, in vain our poor fellows stood up and stretched out their arms; they could not reach far enough to bayonet these cavalrymen mounted on powerful horses, and the few shots fired in chaotic melee were just as fatal to our own men as to the English. And so we found ourselves defenceless against a relentless enemy who, in the intoxication of battle, sabred even our drummers and fifers without mercy. – Captain Pierre Duthilt, French 3rd Division

On the morning of Waterloo, the Scots Greys found themselves in the third line of Wellington’s army, overlooking the centre of the British lines.

While the rest of the British heavy cavalry was launched against D’Erlon’s Corps assaulting Hougoumont and La Haye Sainte, the Scots Greys were kept in reserve.

Their commander, Lieutenant-Colonel Hamilton, watched Pack’s brigade of Highlanders begin to crumble under a massed French attack. On his own initiative, he ordered his men through the retreating Highlanders and straight into the disordered French infantry.

Captain Duthilt was in the ranks of a French column driving into the 92nd Highlanders at Waterloo when the charge of the Scots Greys hammered home. These men were the elite of the British cavalry, mounted on massive war horses. Without the protection of a square, the French infantry was acutely vulnerable and collapsed under the weight of the cavalry charge.

With their opponents in disarray, the Scots Greys pressed home their attack and sabred their way into the centre of the column. Sergeant Charles Ewart found himself in striking distance of the French eagle and launched a heroic assault on the French infantry defending it.

After hammering through the French infantry, the Scots Greys lost cohesion with small bands of troopers dashing off after the fleeing infantry and undefended artillery crews. The cavalry were scattered across the valley floor between La Belle Alliance and Hougomont when the French counter charge, composed of bloodthirsty cuirassiers and lancers, hit home.

Badly mauled, the British cavalry were driven back up the hill.

This fantastic diorama, produced by Luis García Balaguer, showcases elements of the Scots Greys as they overrun a French artillery position. The whole diorama seems to come alive, heaving with implied motion from the charging cavalrymen and recoiling artillery crew.

Yes we know they didn’t carry the standard into battle, but the diorama is a homage to the painting by Lady Butler and looks cool! – John Stallard 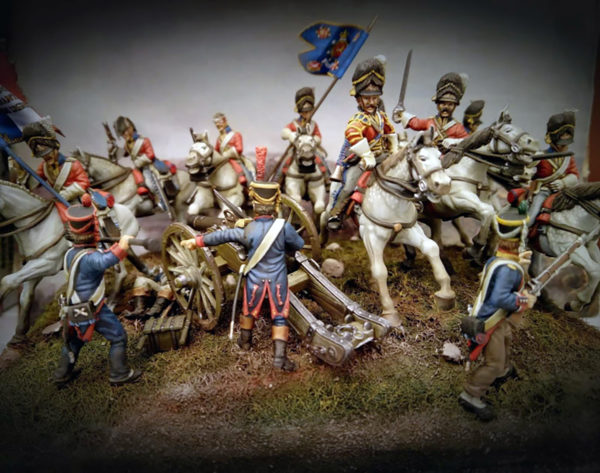 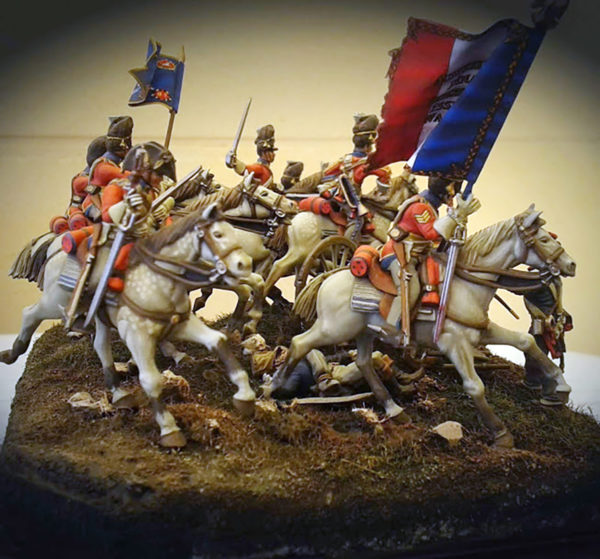 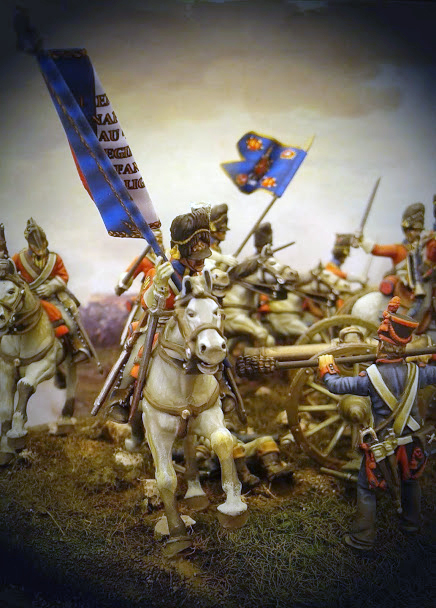 Tom spends most of his time buying books and painting miniatures. He enjoys putting animals on the bases of his miniatures and half-finishing side projects. Some say that he lives in a tower on top of some windswept northern hill with his wife and cow-patterned cat, Spaghetti.
View Profile | View all posts by Tom Mecredy
Frontline Report: The Battle of France begins!
Black Powder 2: The Peninsular War