Beyond the Gates of Antares, Gaming & Collecting, Getting Started

With Saturday’s official launch day for Beyond the Gates of Antares – the game’s illustrious designer, Rick Priestley sat down to offer us a bit of a primer on the game, the universe, and everything Antares!

I guess anyone reading this and contemplating investing in our new game would like to know a few basic facts about how it plays and what our future plans are. Well, it’s a tabletop wargame that is typically played with something like 30 to 50 models divided into squads (usually five guys) or weapon teams (usually three models). You can play bigger games if you want. The game makes provision for larger machines and vehicles, the first of which will be released next year, and these generally form units of their own.

Overall, the game assumes a fair degree of experience and maturity on behalf of the players, which is to say I’ve not aimed to create a beginners game, but I’ve tried to present the rules in a way that makes the game straightforward to get to grips with. The mechanics are D10 based – which I freely confess I chose because it enabled me to explore mechanical ideas that I’ve previously not had much chance to work on – and this does give the game a quality and character that I’ve certainly come to enjoy. See – it’s never too late to learn is it!

The turn sequencing uses the Bolt Action Order Dice draw mechanic. If you’re not familiar with this think of it as a kind of chit drawing system that randomises which side gets to go next with one unit, which means you can never be exactly sure who gets the next chance to move or shoot. Antares also feature a reaction system that allows troops to make immediate reactions in some cases – and the extends the tactical options well beyond the tradition IGOUGO kind of systems.

The book has complete army lists for six different factions, with a range of troops, drones and vehicles, as well as additional equipment and ammunition types. I’ve included a set of ‘matched scenarios’ which are ideal for unplanned games at your club or if you like straight competitive battles, and these are followed by some ‘narrative scenarios’ that are more story driven. There’s also a section with rules for the many forms of alien terrain that your forces might encounter. All this really allows you to explore the Antarean universe. Talking of which… 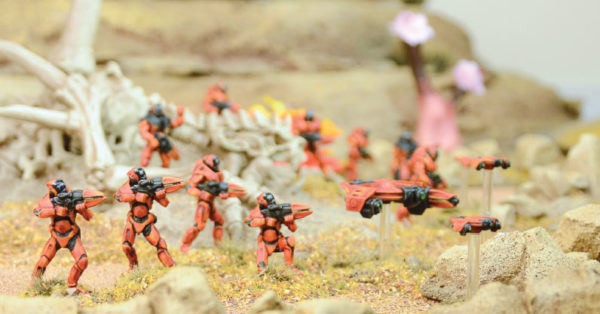 The background to the game is something I’ve especially enjoyed working on. Well it’s not every day you get to create a whole new universe is it! The idea behind the game also gives it its name – namely that worlds are linked by an interdimensional portal formed by the giant red star Antares. Antarean gateways connect worlds in space, time and dimensionally – so rather than occupying a portion of our galaxy or segment of space the Antarean universe is held together by interdimensional pathways.

Although the various human and alien factions of Antarean space all use these pathways, the original constructors of this vast, multi-dimensional engine vanished many long ages ago, leaving the ruins of their civilisation for future explorers to puzzle over. Even their name is a mystery, and the human species of Antarean space call them simply The Builders. Much of the advanced technology of Antarean space results from the exploration and exploitation of these ancient secrets, and searching for, fighting over, and controlling the remnants of Builder civilisation is just one of the things that keeps our armies busy. 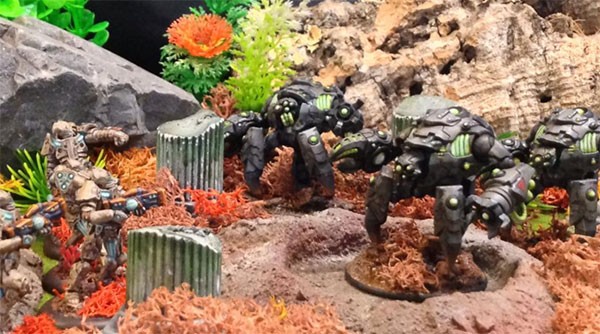 I say human species – plural – because Antarean space is full of human-descendants or ‘morphs’. Some have evolved rapidly as a result of extreme environmental pressure, such as the tough, war-like Algoryn. Others have been engineered to survive in space or in harsh environments, such as the Boromites and the cloned warrior race called the Ghar. These are all factions within the game, and as well as distinctive in appearance they also have their strengths and weaknesses as fighting forces, different kinds of supporting equipment, and various levels of technical accomplishment.

The rule book itself has a fairly substantial background section that describes the history of Antarean space as understood by its human inhabitants, and a description of the main players in our unfolding drama. It’s been created with exploration and development at the forefront of the design, and I’ve kicked that off with the start of what is intended to be an expanding narrative. This is an introduction to the Xilos Horizon – a newly discovered world and anomaly within Antarean space – a world covered in unexplored Builder ruins. The idea is that our universe will evolve through a series of campaigns and back stories, of which the battle for Xilos will be the start, allowing us to introduce more characters and more of the inhabitants of our universe whether human, alien or machine. 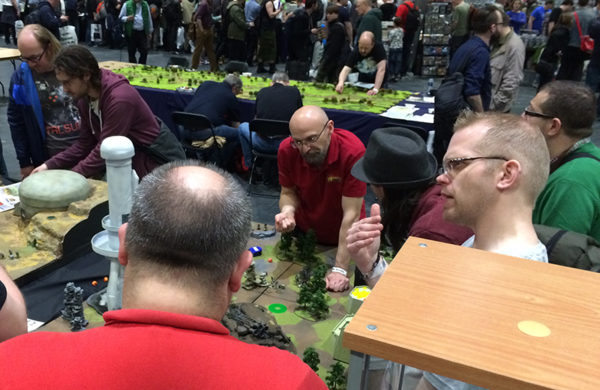 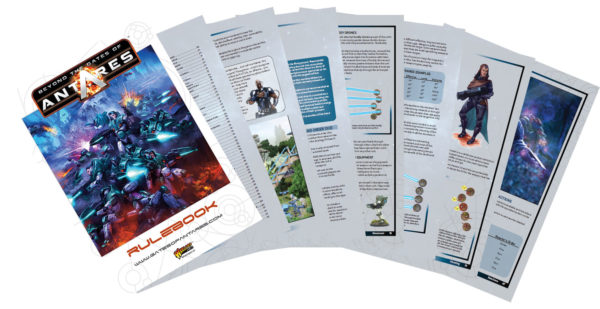 View Profile | View all posts by RichC
Beyond the Gates of Antares – Video Round-up
T.O.R Seven Zero One