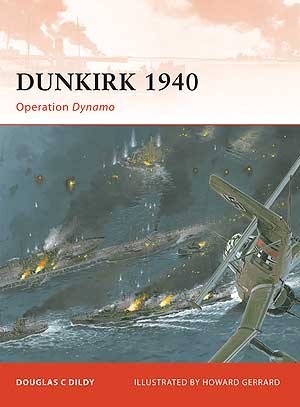 The evacuation of the British Expeditionary Force (BEF) from Dunkirk is one of the most dramatic and famous episodes of the Second World War. Dunkirk 1940 assesses Operation Dynamo from start to finish, with reference to the plans, forces and operations involved. It is a unique and comprehensive compilation of all the facts with excellent illustrations, photographs and maps detailing every significant event in the Operation. For the first time in military literature this title discusses the theory that the results of Dynamo largely depended on the results of an ‘asymmetric’ battle.

Colonel Douglas C. Dildy, (USAF Retired), is an Air Force Academy graduate with degrees in history and political science, who attended the US Armed Forces Staff College and USAF Air War College. As part of his formal military education he has written several campaign studies, most notably on defensive operations against German invasions early in World War II. He is the associate editor of Logbook magazine and has written several articles for other American and British aviation history magazines. This is his fourth book for Osprey.Howard Gerrard studied at the Wallasey School of Art and has been a freelance designer and illustrator for over 20 years. He has worked for a number of publishers and is an associate member of the Guild of Aviation Artists. He has won both the Society of British Aerospace Companies Award and the Wilkinson Sword Trophy and has illustrated a large number of books for Osprey.