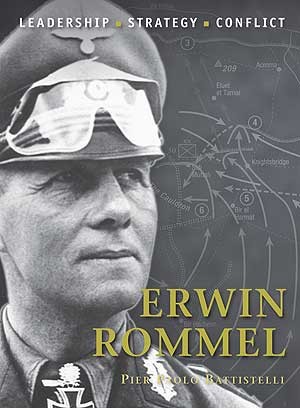 Nicknamed ‘The Desert Fox’ for his cunning command of the Afrika Korps, Erwin Rommel remains one of the most popular and studied of Germany’s World War II commanders. He got his first taste of combat in World War I, where his daring command earned him the Blue Max, Germany’s highest decoration for bravery. He followed this up with numerous successes early in World War II in both Europe and Africa, before facing his biggest challenge – organizing the defence of France. Implicated in the plot to kill Hitler, Rommel chose suicide over a public trial. This book looks at the life of this daring soldier, focusing on his style of command and the tactical decisions that earned him his fearsome reputation.

Pier Paolo Battistelli earned his PhD in military history at the University of Padua. A scholar of German and Italian politics and strategy throughout World War II, he is active in Italy and abroad writing titles and essays on military history subjects. For Osprey, he has already written Rommel’s Afrika Korps and three volumes on the Panzer divisions in the Battle Orders series and most recently Warrior 144: Italian Blackshirt 1935-45 along with Piero Crociani. Peter Dennis was born in 1950. Inspired by contemporary magazines such as Look and Learn he studied illustration at Liverpool Art College. Peter has since contributed to hundreds of books, predominantly on historical subjects, including many Osprey titles. A keen wargamer and modelmaker, he is based in Nottinghamshire, UK.