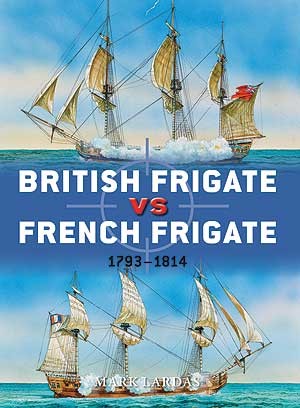 In the Age of Fighting Sail (1650-1820), ambitious officers of the navies of many nations sought command of a frigate. Speedy, nimble and formidably armed, frigates often operated independently, unlike the larger ships of the line. Legendary sailors such as Edward Pellew and Charles-Alexandre Léon Durand, Comte de Linoise, found that commanding such a ship offered numerous opportunities for wealth. In this book, four representative frigate duels are examined: first, a battle fought between two closely matched ships HMS Nymphe (36) vs La Cléopâtre (32); second, a victory won by an inferior British frigate over a superior French frigate HMS Pallas (32) vs Minerve (40); third, a victory – the only one – by an inferior French frigate over a superior British frigate HMS Ambuscade (32) vs Baïonnaise (24), and fourth, victory of a superior British frigate over an inferior French frigate HMS Indefatigable (44) of Hornblower fame vs La Virginie (40). Featuring specially commissioned artwork and offering expert analysis, this study provides a vivid account of the bloody combats fought by the most romantic warship of the Revolutionary and Napoleonic era – the frigate.

Mark Lardas holds a degree in Naval Architecture and Marine Engineering, but spent his early career at the Johnson Space Center doing Space Shuttle structural analysis, and space navigation. An amateur historian and a long-time ship modeller, Mark Lardas is currently working in League City, Texas. He has written extensively about modelling as well as naval, maritime, and military history.

Dan can often be found contemplating the mound of unpainted minis building up under his desk. He has a tendency to roll lots of ones. He also has a tendency to complain about rolling lots of ones.
View Profile | View all posts by Dan Hewitson
Osprey: Napoleonic Naval Armaments 1792-1815
Cruel Seas: Soviet Navy Paint Set