The latest releases from our partnership with Conquest Miniatures are these two great Indian Leaders.

Tecumseh was raised in Ohio Country during the American War of Independence. During this conflict and the Northwest Indian War he was exposed to a near constant environment of war. As US forces pushed into the territory ceded to the indians by the British the Shawnee migrated further north west, settling in what is now Indiana, during the early 19th century.

Following his vision to develop an indepedent Indian nation under the protection of the British, Tecumseh recruited other tribes into what would ebcome known as tecumseh’s Confederacy.

Allying with the British during the war of 1812, Tecumseh’s Confederacy helped capture Fort Detroit before he was killed by the Americans at the Battle of the Thames in 1813. Tecumseh’s legacy was to implode as the British deseryed their Indian allies at the peace conference that ended the War of 1812 and as a result his Confederacy fell apart…

Despite this ultimate reversal of fortunes, Tecumseh was a visionary leader of the Shawnee tribe and has become a near mythical figure in American, Canadian and Indian folklore. 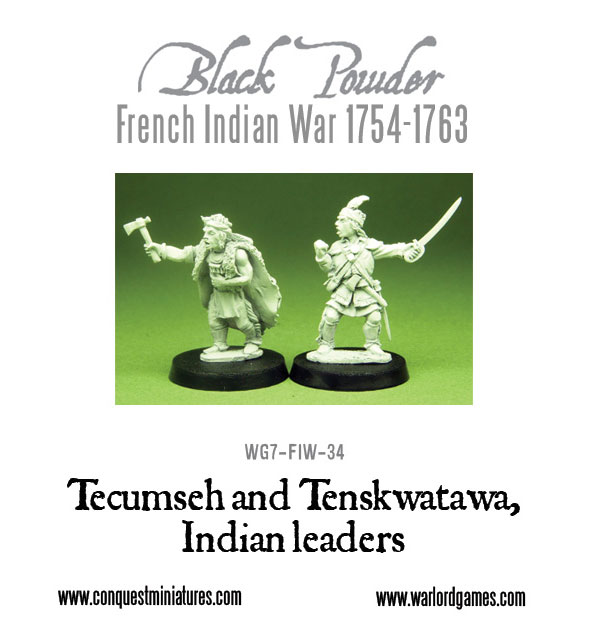 The orphaned younger brother of the Leader of the Shawnee tribe, Tecumseh, he was originally known as Lalawethika (The Noise Maker) and following a struggle with alcoholism in his formative years he before changed his name to Tenskwatawa (The Open Door).  Becoming a religious leader for the Shawnee, Tenskwatawa advocated a return to a more traditional Indian lifestyle and deounced the American and Europeans as children of the devil, mobilising Indian tribes to resist them.

Known as ‘The Shawnee Prophet, attracted a large following among the many Indians who had suffered from epidemics or from loss of their lands to the white man. His teachings tell of an impending apocalypse which would destroy the settlers…

Upon his brother Tecumseh’s death at the end of the War of 1812, Tenskwatata faded from view and never again held the power he had wielded before dying in 1836 in Kansas.