One of the most popular Pike & Shotte armies with you are the Highlanders and the Covenanters. Those of you of a North-of-the-border persuasion rejoice – here are a bunch of great new miniatures to add to your force of Irn-Bru-swilling Jocks…

The Scots Covenanters fielded a huge array of artillery, ranging from huge siege pieces to tiny mobile “murderers” or frame guns. These are simple, small barrels attached to a sturdy wooden supporting frame, hence the name. Crewed by a just three or four men, they could be wheeled or indeed carried around on the battlefiled in a handy manner, firing a light cannon ball or as often we think, hail shot.

Warlord’s gun comes complete with a sturdy mule to carry the gun and its supplies and three trained gunners.

Field this in all your Scottish armies of the period and keep your powder dry!

You can purchase this set here in the webstore.

Join the army and see the world they said! This is a pack with Scots casualties from the 17th Century. These are great to either mix in the ranks to give a more realistic look to a regiment or ideal too for painting up and using as wound markers on the table top.

These can be used really for Covenant armies or Montrose armies, the clothing deliberately being left ambiguous, but still great fun to paint. There are four different models.

You can purchase these casualties here in the webstore. 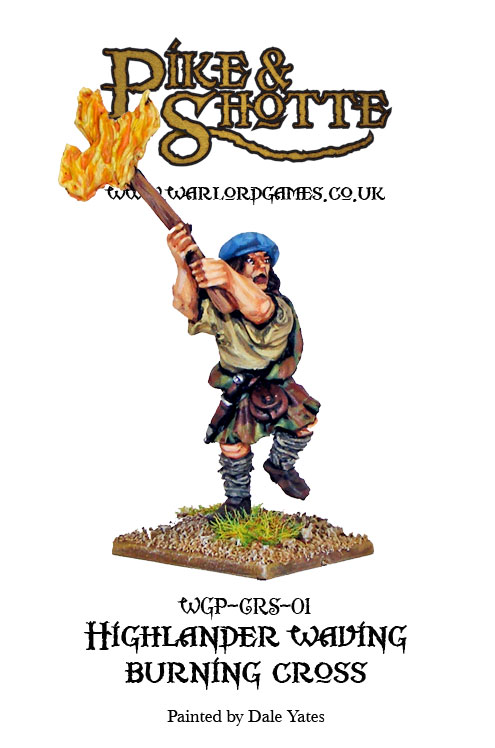 To raise the gathering of the Clans and as a declaration of hostile intent it was common for the”Fiery cross” to be run through all the towns and villages, so that no one could be in any doubt that danger was near and all good men must go to do service for their Laird.

As the fiery cross passed through, a general clamour would go up and soon the men would leave the plough, the land and gather up their weapons and simple rations of oatmeal and whisky.

Please note this has no parallels with less savoury types who use similair imagery in more modern times.

You can purchase this higlander here in the webstore.