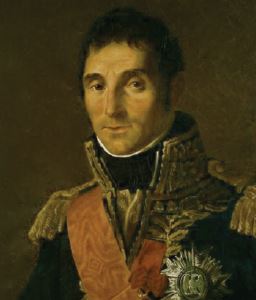 Born in 1758 into modest circumstances, Massena had a colourful early life. He was a cabin boy, soldier and smuggler before he joined the army for a second time in 1791, and a year later he had risen to the rank of colonel.

During the next few years Massena campaigned in Italy, rising quickly to become a divisional general. By 1799 he had his own command in Switzerland and won a dramatic victory over the Russians at the second battle of Zurich. Alas, Massena was soon in hot water with Bonaparte, having lost the fortress of Genoa to the Austrians, for which he was promptly sacked. By 1804 Napoleon had forgiven him and he was amongst the first eighteen men in France to receive the Marshal’s baton.

As a Corps commander he showed the drive and determination of a ‘modern’ general, especially at the battle of Aspern-Essling where he coordinated the defence of the village of Aspern against concerted and determined Austrian attacks.

In 1810 Massena was given the honour of commanding the Army of Portugal. After his initial success he was responsible for the French defeats at Bussaco, Sabugal and Fuentes de Oñoro and was replaced. He never saw action again.