Grab your lances and ride for the sunny shores of Southern Italy with a host of Normans, including the future King of England!

Our modern conception (speaking as an English person) of the Normans is rooted in the conquest of 1066 and the subsequent campaigns to pacify the British Isles. The army of William the Conqueror crushed Saxon opposition under its mail-shod boot and then set about building castles and fending off bands of brigands.

While all of this is excellent fodder for wargamers, it often overshadows the adventures of many Norman nobles across Europe and the Meditteranean, who helped set the stage for both Italian and Crusader states later on in the medieval period.

Born from a union between indigenous Franks, Gallo-Romans and invading Norse Vikings, the Normans were a people renowned for their martial spirit, forging their dynasty with the point of a sword. The famed Viking ruler Rollo was given a strip of territory along the French coast, providing he protected the Frankish king from further Viking incursions (and converted to Christianity.)

Spreading out from their home in Northern France, Norman adventurers carved out kingdoms in the British Isles, Italy, and the Holy Land.

Italy in the 11th Century 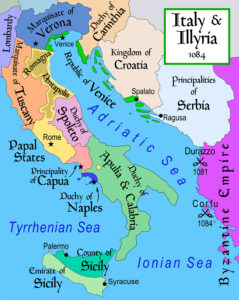 In the early 11th century, Italy found itself divided between competing remnants of the Roman Empire – the Holy Roman Empire to the west, and the Byzantine Empire to the east. Petty kingdoms and principalities squabbled amongst themselves, while the Arab caliphates consolidated their gains on Sicily.

Italy became the breeding ground for soldiers of fortune, a market that the Normans quickly cornered. Historians cannot agree on when the Normans first arrived on the peninsula, with the earliest date being 999, the latest approximately 1017.

All accounts state that a group of between 40 and 250 Norman knights fled the wrath of Richard II across the Alps, seeking service with Pope Benedict VIII in Rome – he sent them back and forth across the Italian countryside where they would fight for both sides of an escalating conflict between the Lombards and Byzantines. Norman knights would dominate the Italian battlefield, seeing off the elite Varangian Guard on several occasions.

The promise of plunder and status drew more and more men from Normandy (including William future King of England), swelling the ranks of the mercenaries companies, allowing them to eventually annex their own territory and begin their 150-year conquest of southern Italy, which would eventually expel the Arabs from Sicily and the Byzantines from the regions of Apulia and Calabria. 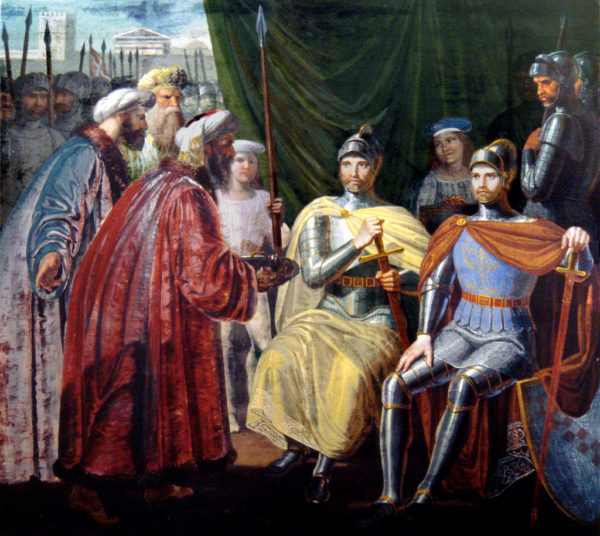 Norman noble, Roger Guiscard receives the keys to Palermo from the defeated Arabs.

Wargaming the Norman Conquests in Italy

Norman warbands are a joy to collect, jam-packed with opportunities for conversions and cool paint jobs. Heroic knights lead the charge, while mail-clad infantry swarm forward under a hail of arrows (or crossbow bolts.) 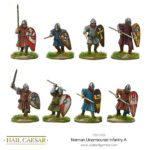 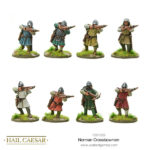 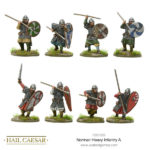 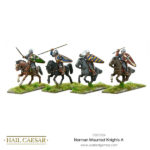 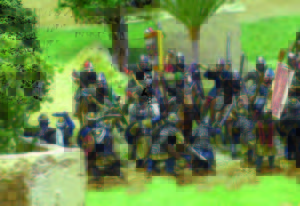 Our range of fantastic miniatures allows you to recreate warbands of all shapes and sizes – from the first arrivals under the Drengot brothers to the force of 300 knights that vanquished Harald Hardrada and his Varangians at the battle of Olivento.

You’ll find rules for using these fearsome warriors in the Army Lists: Late Antiquity to Early Medieval book, along with rules for all their opponents – from the Byzantine Varangian guard to the forces of the various Arab and Lombard armies roaming the Italian peninsula during this period.

Check back next week for an in-depth look at the Varangian Guard!

Tom spends most of his time buying books and painting miniatures. He enjoys putting animals on the bases of his miniatures and half-finishing side projects. Some say that he lives in a tower on top of some windswept northern hill with his wife and cow-patterned cat, Spaghetti.
View Profile | View all posts by Tom Mecredy
Cruel Seas: Evacuate the Beaches
The Peninsular Campaign in Black Powder