Our forthcoming rulebook for Ancients, Hail Caesar, is taking Warlord HQ by storm. As such some of our brave lads have starting down the road of getting armies together and having at each other on the tabletop. But before we get into all that here is the world exclusive of the rulebook’s front cover! 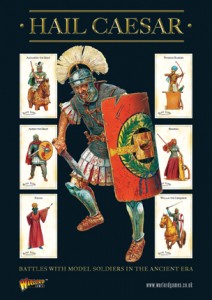 As you can see it has more than passing resemblance to our Black Powder rulebook – quite right seeing as the game system and the tone of the rules share rather a lot.

A tale of IV gamers

Hail Caesar isn’t far off at all now and a whole new glorious age of Ancients gaming awaits. Indeed you could say the release of this game marks the end of an error in wargaming.

Needless to say we, the worker bees, of Warlord Games are a more than a little excited at the rumours that reach our ears (when the bosses get excited [1] they talk too much) and after two months of constant begging Paul (the Warlord Queen Bee) has relented and is allowing us to write our own article about Hail Caesar provided of course that we do this in our own time and pay for the models ourselves.

This leaves us with a tabula rasa to fill with our ideas for Hail Caesar and to do what we want.

So myself (Steve), Ches, Dave and Gareth are going to embark on our own adventure and each collect an Ancient army ready for the release of Hail Caesar. Hopefully a few others will join us a long the way too.

The Rules – there aren’t any. It’s our hobby and so we will make up our own rules. The one that we could agree on is that we will do our best to stick to a limit of £25 each week. None of us have seen a finished copy of Hail Caesar so we will also be trying to find out as much as we can by harassing the bosses and buying off Rick Priestley with cake/tea/free miniatures.

The first thing to decide is what Ancient army I want to collect. This is always a bit tricky as it turns out that the thing about history is there’s rather a lot of it. Still to me there is only one army that embodies the valour and honour that I want from an army, clad in bright uniforms and resplendent in shining armour. It is also helped by the fact that Warlord Games produces a rather splendid range of them. Yup, Romans.

Going through my old school books when i was seven I did a project on Romans. They were pretty cool back then and I dressed up as a Roman Labourer [2] for our Roman day. I also got to try olives for the first and last time. No wonder the Romans wanted to conquer the world; they were probably trying to find something to clear the taste.

Then I discovered myths and legends. As this was twenty-odd years ago it was back in a day when we all had to use our imaginations and actually read to get our action fix. These were brilliant!

Secondary School once again led to a Roman fix in lessons. Not so much fun as dressing up as this time round I had the joy of studying Latin. Our Latin teacher was so old that I’m pretty sure it was his first language. The one good thing was that all Latin textbooks are concerned with legends and so translation is just a case of doing enough to work out which one you are studying. Fairly simple – the mention of Hercules and you are looking at one of twelve tasks, Ulysses and you’d best brush up on your naval vocabulary and if you pick up the names Leda and Jupiter then…well you get the idea.

But I digress. My point is that Romans kick ass, they were cool when I was a kid and they’re even more awesome now. Hail Caesar let’s you play with big armies and one thing about collecting big armies is you need to be able to keep your enthusiasm while painting hundreds of soldiers. It’s really worth spending a bit of time thinking about what you really want to collect or else you risk adding even more models to that collection under the bed.

Oh, and it also helps if you can cheat a little. Unbeknownst to Chesney and Dave but beknownst to us, I actually have the start of a Roman army having painted a Roman Starter Batallia. So week one and I already have a unit of Legionaries, Veterans, Praetorians and Auxiliaries. Not a bad start at all…

I have been a keen war gamer for over 20 years, so when the opportunity arose to talk to the one and only Rick Priestly about all things Roman I jumped at the chance. We talked about a few of the common misconceptions that usually come up in regards to their mighty Legions as well as some interesting finds that have recently been unearthed near the Rhine. I wanted to collect a new force for the up and coming Hail Caesar release and decided to explore the history of the period further.

I have seen the famous sight of Trajan’s Column in Rome – commemorating Emperor Trajan’s successful campaign against the Dacians – and thought it really impressive as a monument. It wasn’t until I saw a full size replica, cast in plaster, in our very own Victoria & Albert Museum that I realised just how good it was. It shows, in detail, the various actions of both wars; and I was amazed to see that Auxiliary troops were the far most common unit put to battle. I had always assumed (or at least Hollywood had convinced me) that the Legionaries did all the fighting. These auxiliary barbarians were not Citizens of Rome but were definitely well trained soldiers. Regiments were created all over the Empire and sent to fight neighbouring territories. Those regiments that survived for any period of time could be asked to travel from one side of the Empire to the other. This meant troops that were from different cultures, spoke different languages, and had different religions to each other fought side by side in the name of Rome.

So with this spark of an idea I decided that an ALL Auxiliary army would be the way forward. Those high and mighty Legions could sit around all day whilst the real fighting was done by real soldiers.

Now all I needed was a nation or two to put to the sword!

Having been asked to take part in the Tale of IV Gamers in honour of the upcoming release, Hail Caesar, I have decided to collect a Celt army. I say ‘decided’, when actually ‘press-ganged’ is probably closer to the truth! Either way, I’ve always liked the idea of forming my own tribe of marauding warriors and this was the perfect opportunity to do so.

Celts have always appealed to me rather than other more glamorised races such as the Romans because they were quite often small tribes protecting their homes, rather than the organised war-machine of territorial expansion. The life of a Celtic warrior, while a potentially barbaric one, seems like a much simpler life in comparison to being a conscript in the Roman military.

Having settled upon a Celt tribe, I ruled out the Ancient Britons due to their silly haircuts, ignored the Dacians because I couldn’t point to where Dacia would once have been on a map and disregarded the Germanic tribes as they were too hairy for my liking. For me the tribes offering the most scope for painting and gaming were the tribes of Gaul, potentially one that had just killed the local Roman militia and stolen some of their kit. As such, I hope to include many conversions, pilfering many components from the Warlord Roman range. Don’t expect to see any of my army hiding behind a Testudo or shield-wall though, Celts were real men after all!

Little Steve and I recently had the joy of spending a weekend with each other’s company at the rather splendid Hamburg Tactica, in, perhaps unsurprisingly, Hamburg. The German hospitality was brilliant, the tables inspirational and we drove back full of hobby love spending most of the 14 hour (!) drive back talking about our plans for our new armies.

Steve called Romans fairly quickly having the advantage of not having a road to concentrate on at the time. While staring at the white lines of the Autobahn many thoughts of different armies came to my mind and quickly discarded. I had always planned at some point to build and Ancient British army themed around horses and hounds (Sounds like a pub name I know). So I doffed the thinking cap and decided how I wanted my army to look and play.

By the time we arrived at the Channel I’d formed a pretty solid idea of what I wanted to collect. As I have mentioned before troops is where it is at for me so I looked at the first building block of my army, two large units of Celtic Warriors. This will form the centre of my line for most of my engagements. I will then add more units of Cavalry, one elite unit with full body guard and three units made up from the villagers who are lucky enough to own a horse or even borrowed one! More foot troops will be added and eventually the fearsome fanatics.

My Celt army will be a horde army and so involve a lot of painting. When painting hundreds of miniatures it’s important to allow for a bit of variety. Fortunately Hail Caesar uses a similar command system to Black Powder so there is the opportunity to break things up with small command dioramas and without the need to base models individually plenty of character can be added into even the most basic unit. I also will be creating lots of variant poses with the plastics, so lots of chopping and green stuff I see happening over the coming nights.

Making my army unique is a key factor for me and like to add items of interest to the units so that each has a little tale to tell. Looking through our ranges for inspiration I noticed we do have a lot of dogs in our ranges, and as everyone knows dogs are a man’s best friend. So the unique theme of my army will be dogs, so when looking at my army keep an eye out, you will never know where they might crop up.

[2] Even back then I knew my place