Four Marshals: A Question of Generalship

Our four Marshals have been burning the candle at both ends to get their armies ready for battle. This week, we’re taking a look at their generals, and generalship in Black Powder!

Black Powder’s unique command and control system is one of the things that sets it apart from other wargames. Players take the role of generals, issuing verbal orders to their miniature troops as if they were on a real battlefield.

An order might be phrased as: “Colonel Whitmarsh will order the 51st Foot to cross the river via the bridge and deploy into line on the opposite bank.” 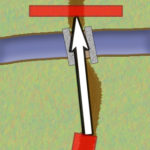 The 51st Foot are on the wrong side of the river, with a battalion of French infantry closing on the bridge. If they can’t prevent the crossing, the whole battle might be lost. Currently, they’re advancing down a dirt road (see diagram) in march column.

Once the order has been issued, an order test is made against the brigade commander’s Staff Rating. Depending on how successful the officer is, a unit may get to make multiple moves in a single activation. In this case, the 51st Foot need two moves worth of movement to fulfil the general’s order;

1 move to cross the river via the bridge, and one move to deploy into line, ready to receive the dastardly French.

Colonel Whitmarsh, commander of the British infantry brigade has a staff rating of 8. As he’s off directing the action elsewhere, he suffers a -2 penalty for being 24″ away. The 51st Foot get a +2 bonus for being in march column on a road or track.

To successfully complete the two moves required, Whitmarsh must roll 6 or less on two dice. He succeeds, and the 51st Foot marches across the bridge and deploys into line as if they were on a Sunday parade.

If he’d rolled a 7 or 8, the unit would have been able to move across the river but would remain in march column, the perfect target for opportunistic cavalry or sharp-eyed artillery gunners.

All orders – from initiating a dashing cavalry charge, to bombarding an enemy fortification are issued in this fashion, with various special rules and conditions covering different tactics and circumstances.

Black Powder encourages you to get into the spirit of generalship and issue orders as if you were commanding men on the battlefield. While this might seem intimidating, it’s actually very simple once you’ve got the hang of it. Select a unit, and state your intention as simply as possible.

Our marshals have had a chance to do some more hobby, focusing on the commander of their miniature army! 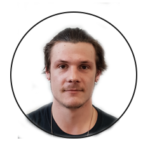 I forgot about my deadline this week so I started painting the illustrious Marshal Blucher at 8 pm on Sunday night. I’m pretty happy with how he’s come out – perhaps despite the speed I was painting at!

Blucher’s the iconic Prussian marshal – he started his career as a cavalry commander, leading the charge against Napoleon at Jena-Auerstedt, continuing on with the Prussian army until the final victory at Waterloo.

During the 1814 campaign in north-east France, the stresses of command got to the normally dependable Blucher – he suffered a mental breakdown – losing his sight and afflicted by delusions that a Frenchman had impregnated him with an elephant!

I’ve stuck Blucher on a standard cavalry base for now – I might go back and do a little diorama with some spare landwehr in future, but I’m happy with him for now! 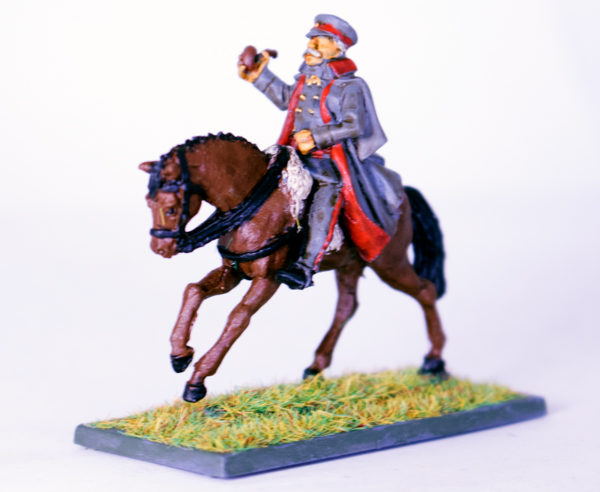 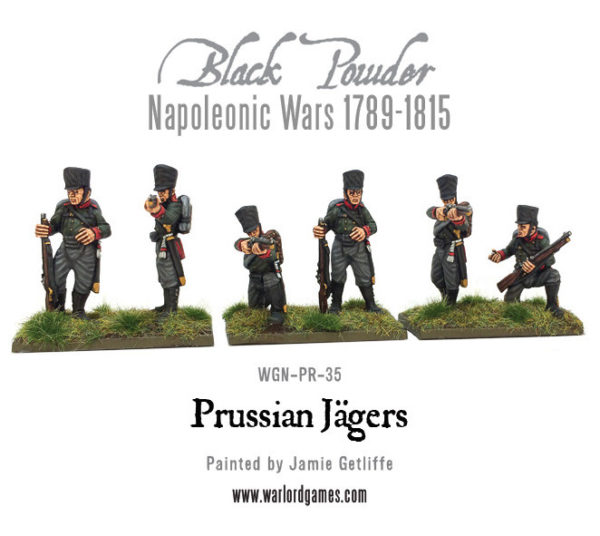 I’ve got some Prussian Jagers to add to my infantry brigade for next week. These keen-eyed sharpshooters should screen my infantry regiment when they’re attacking! 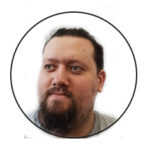 I’ve chosen to focus on the commander of my infantry brigade this week, while I plan out my diorama for the Duke of Wellington himself! Part of the appeal of Black Powder is creating these characterful dioramas to represent command models – as they’re not governed by the standard basing conventions, there’s plenty of opportunities to make things interesting.

I’ve used one of the officers from the Waterloo pack – he’s surveying the ground with his telescope while his horse takes the opportunity to have a little snack!

I’ve put my new airbrush to work, and I managed to block in the base colours with a bit of fine trigger control. 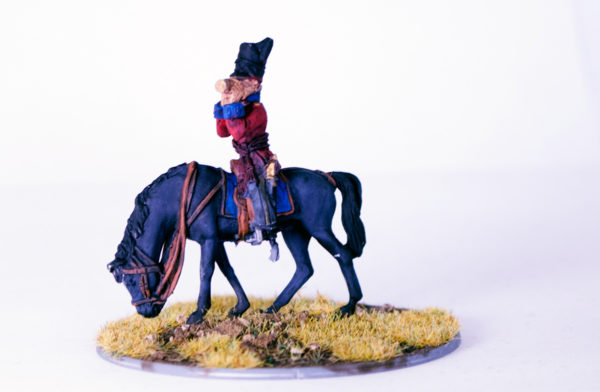 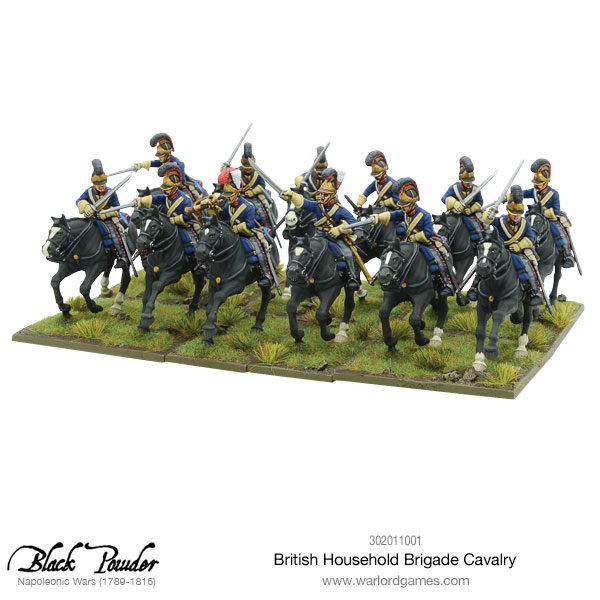 For next week, I’ll have the core of my cavalry brigade ready for the tabletop. The Household Brigade charged into the history books at Waterloo and are exceptional cavalry units on the battlefield! 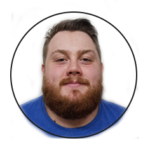 Leading the French charge into battle is the flamboyant Marshal Ney, renowned for his command of the cavalry at Jena and Waterloo. He features several times across our Black Powder range – the version I’ve painted here and the exclusive book figure for the Clash of Eagles supplement.

The model really captures Ney’s bravery, showcasing him at the gallop, wildly gesticulating with his hat to urge his troops onward!

Following Napoleon’s defeat at Waterloo, Ney was put on trial for treason and sentenced to death by firing squad. He was given the honour of commanding the executioners himself, saying: “Soldiers, when I give the command to fire, fire straight at my heart. Wait for the order. It will be my last to you. I protest against my condemnation. I have fought a hundred battles for France, and not one against her … Soldiers, fire!” 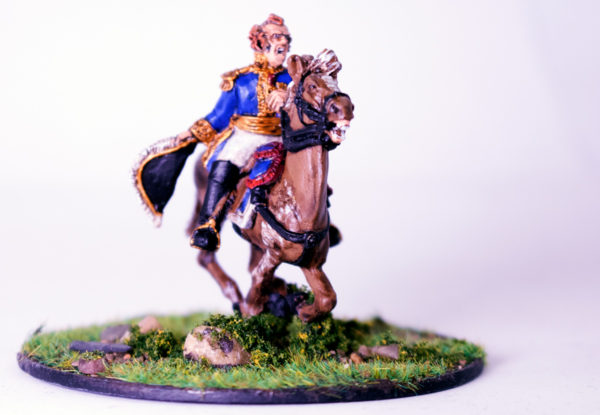 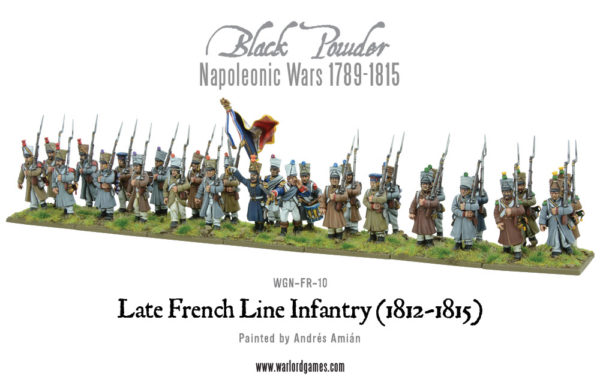 I’ve chosen to add some bulk to my infantry brigade, with a unit of late line infantry. In their long coats and covered shakos, they’re perfect for the later campaigns in central Europe, Russia and the climax of the war at Waterloo. 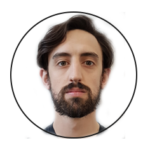 My Polish army is led by Prince Jozef Poniatowski – a member of the Polish aristocracy who became a Marshal of France during Napoleon’s campaigns against the Austrians and Russians.

On several occasions, he personally led his men in bayonet charges, decisively altering the outcome of the battle. I’ve used the French infantry colonel brandishing his sword, painted in the same scheme as the rest of my infantry to represent my heroic general! 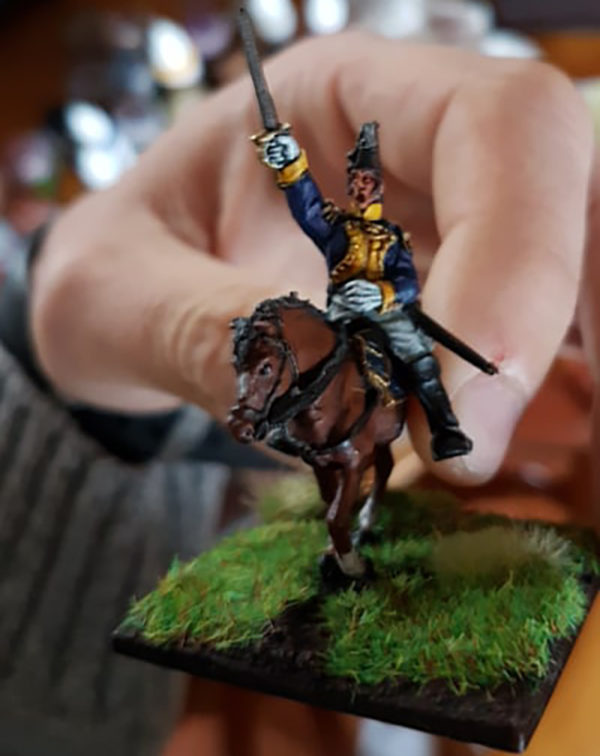 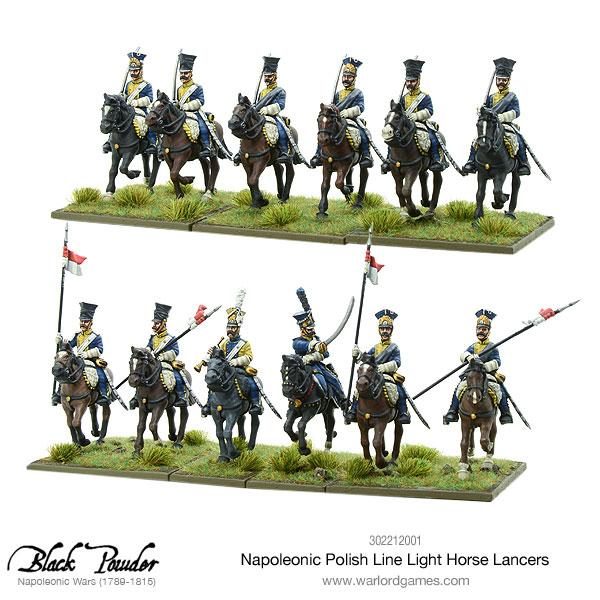 Like Kalon, I’ve made a start on my cavalry brigade with a unit of lancers. Polish lancers were renowned across Europe for their skill as horsemen and the killing power of their lance-tipped charge.

We’ll take a look at the paint schemes each of the marshals are using for their infantry units!

Tom spends most of his time buying books and painting miniatures. He enjoys putting animals on the bases of his miniatures and half-finishing side projects. Some say that he lives in a tower on top of some windswept northern hill with his wife and cow-patterned cat, Spaghetti.
View Profile | View all posts by Tom Mecredy
Spotlight: Bolt Action for 40k Players
Spotlight: The Kriegsmarine R-Boat