Beyond the Gates of Antares: Support Weapons

This time we have a bit of a round up of the work we’ve been doing on crewed support weapons for the Antares project. As you will see, all of these are digital designs, so what we have to show you are graphic renders rather than the traditional putty and plastic master models. When it comes to reproducing mechanical shapes, the digital process offers many advantages, so we have found it an ideal method for making things like these mobile support weapons.

I call these ‘support’ weapons because that is essentially what they are – mobile weaponry that is capable of deploying and operating alongside regular fighting troops. Larger versions are referred to as ‘heavy’ weapons, and these are generally less mobile and more likely to be used for bombardment and especially to attack fixed positions. Our work so far has given us a selection of support weapons for the Algoryn Prosperate, including crew, and a heavy weapon – strictly speaking a piece of heavy equipment – for the Boromites. 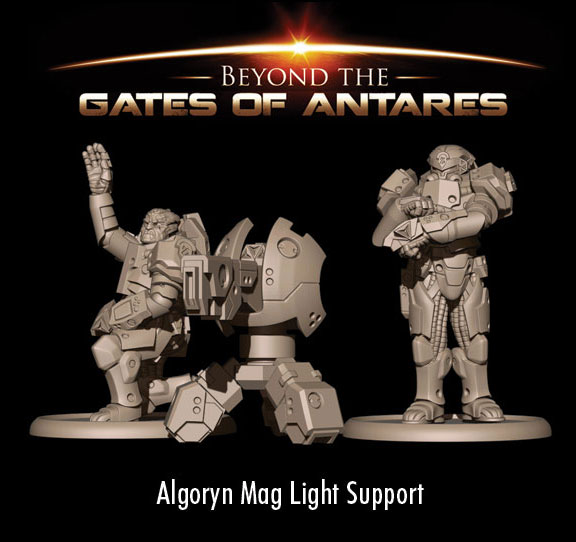 This is an Algoryn Mag Light Support (LS) weapon – a heavier version of the standard man-carried Mag gun. Like all magnetic weapons it shoots metalised spikes, which in the case of sophisticated weapons such as this are synthesised from an integrated hyper-compressed material core (HCM or hypermat). This technology is basic to advanced Antarean societies. Thanks to hyper-compression, long periods of rapid fire can be sustained by the Mag LS without significant expenditure of the ammo core. The weapon is mounted on a suspensor bed, which propels the machine independently – it can hover and move at low height, or it can settle down onto the suspensor blades and anchor into the ground for extra stability. 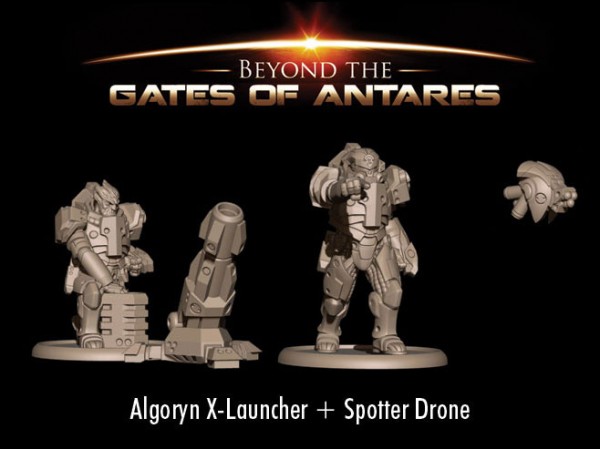 The support version of the X-launcher is a long-range lobber – effectively a highly mobile and compact artillery piece. The ‘X’ stands for ‘X’-plosive but also reflects the cross shape of the magnetic launch rails, a feature common to these kinds of weapons from the smallest to the very largest. As well as explosive shells, the X-launcher is able to hurl a number of special munitions designed to provide cover, disrupt communications, and in some cases establish node points for other kinds of weapons or equipment to fix on to. Explosive shells can’t be compressed in the same way as solid unitary materials, so ammunition is not only limited but also it has to be transported as well. 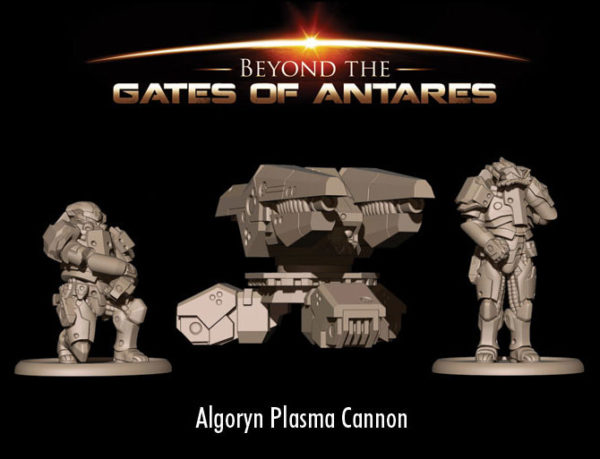 The plasma cannon is a hard-hitting support weapon used for taking out heavily shielded targets. As you can see it follows the general shape and layout of the hand-held plasma carbines carried by Algoryn AI (Armoured Infantry) command squads. Support weapons generally have a crew of two to operate them, although they are capable of moving on their own using their suspensor beds. The crew don’t necessarily have to manhandle the weapon – they can direct and fire it using the comms gear built into their armoured suits. Direct and remote actuation are both possible should this prove necessary.

As well as crewed weapons, some Antarean forces employ weapon drones, which are fully independent drones without any crew at all. However, Algoryn tactical doctrine favours the use of crewed weapons, not least because their eternal enemy the Ghar employ relatively primitive equipment including dirty nano-bombs, which can render autonomous drones useless. 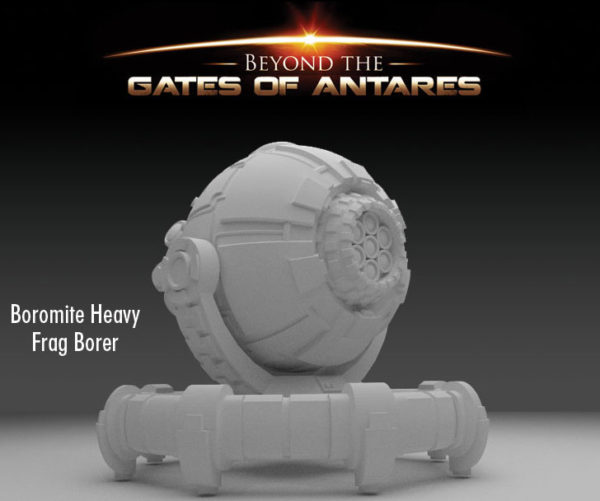 The Frag Borer is a kind of fractal disintegrator, tightly focussed to a short range, and used for boring large tunnels through solid rock. As such it is really an industrial machine – but in the hands of the Boromites it also makes a useful weapon. It is mounted upon an annular suspensor bed, which can propel the machine over level ground, or it can rotate to hold the borer in place as it advances down the tunnel it is making.

The annular bed also houses a short-ranged transmat array, which moves the excavated material from the tunnel face directly to a spoil deposition area via a transmat pick-up. However, in the gnarly hands of the Boromites, the Frag Borer makes a devastating weapon, capable of ripping through even the most heavy shielded buildings and vehicles. The Frag Borer requires a crew of three Boromite Miners to operate it. 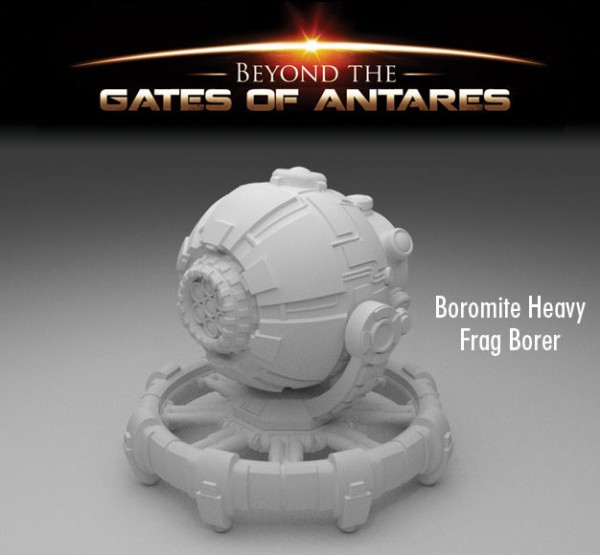